It’s been the big question all season: who is the Cylon still hiding within the colonial fleet? In this week’s episode of Battlestar Galactica we got a scare when newly unboxed D’Anna Biers (Lucy Lawless) told President Roslin that she was the final Cylon–only to moments later laugh it off and assure us that for now, the identity of the Final Five Cylons would be a secret D’Anna keeps close.

Some of us here at BuddyTV are convinced that the final Cylon is going to be unveiled this Friday during “Revelations,” the last episode before Battlestar Galactica‘s mid-season hiatus. What better time to drop the bombshell and leave fans salivating for months on end? As we prepare for the mid-season finale, here are some new predictions on who might be the last Cylon hiding under everyone’s noses.

We lump these two together because, really, could they be any more obvious? Baltar (James Callis) has been connected to the Cylons since the beginning, with visions of Six disrupting his everyday life and leading him toward becoming a prophet of the Cylon god, not to mention living with the Cylons for a time. Meanwhile, Starbuck (Katee Sackhoff) was presumed dead only to reappear months later alive, well, and completely unaware that she had been gone for more than six hours.

So one of these two must be a Cylon, right? Not so fast. If there’s one thing last season’s finale taught us it’s that the folks behind Battlestar Galactica aren’t ones to go for the easy answers. They want to shock and surprise, and would either of these two being the last Cylon be all that surprising? While these two characters are good candidates, this writer is of the opinion that the Battlestar Galactica creators have something more unexpected in store.

One of the most shocking moments of the season was when Cally (Nicki Clyne) was blasted out an airlock by Tory. Many have thought–myself included–that this was the last we would see of poor, betrayed Cally. But there’s that one line that causes us pause, that one mention to Doc Cottle of feeling off as the fleet flew through the nebula–the same nebula in which Tigh, Tyrol, Anders and Tory discovered they were Cylons. Could Cally, so famous for her shooting of Boomer back when that Cylon was revealed for who she was, be a Cylon herself? And if so–what does it mean that there would soon be two fully Cylon babies on board Galactica, counting the little bundle of joy on its way from Caprica Six and Tigh?

Perhaps we’re focusing on the wrong baby. I theorized last week that the male members of the Final Five might be fertile while the other male Cylons are not, which is how Tigh managed to impregnate Caprica Six. What a twist it would be, then, to reveal retroactively that Athena’s (Grace Park) daughter with Helo (Tahmoh Penikett) is a full bred Cylon and not a mixed Cylon/human baby like we always thought. Of course, a revelation that Helo was a Cylon might trivialize what he went through to keep Athena as his wife, so the romantic side of me rejects the idea. But what I want and what the BSG creators have planned may not be the same thing.

Gaeta (Alessandro Juliani) and Dualla (Kandyse McClure) have both been on BSG in varying sized roles since the beginning. Both have been endlessly faithful members of Adama’s crew, and both have had chances to interact with bigger players–Gaeta as Baltar’s presidential aide, and Dualla as Lee Adama’s wife. What these two also have in common is a conveniently vague background. They have their stories of growing up in the colonies, but who really knew them as children? Who knew their families? How easy it would be for a Cylon to sneak into the fleet as an important but not too important crew member–much like Boomer once did.

Of the two, I’m thinking Dualla has more of a chance at being the final Cylon. Currently there is a gender imbalance amongst the Cylons–seven males compared to a mere four females. Surely a race trying to reform itself as a new species would include another female model. Also, while Gaeta has been off causing trouble with Starbuck and losing his leg, where has Dualla been? Perhaps she has been dealing with the realization that she is a Cylon separately from the other four members of the Final Five?

Zarek (Richard Hatch) went from rebel leader to Vice President in one of the bigger career changes on the show. He started out as an antagonistic force, someone vocally opposed to political policies and not afraid to show it. Surely a Cylon intending to hide within society wouldn’t make such waves . . . unless that was the whole point. It has been at least partly assumed that the final five Cylons did not know who they were, but what if Zarek knew full well who he was and has all this time been playing the crew toward whatever end the Cylons want? If we are to believe the prophecies, that end is the location of Earth. A Cylon critical of humans might want to force them to change before they are worthy of discovering the promised land. On another hand, a Cylon who doesn’t have good intentions for humans might just want to cause them endless headaches as they flee through space, a task which Zarek did well in the early seasons of the show and seems to be doing subtly now as he tries to influence Lee Adama.

Lampkin (Mark Sheppard) was a man first introduced as a loopy lawyer and was recently revealed to be even crazier than previously thought. A question many of us have had, especially in this last season, is why so much time has been spent psychoanalyzing a glorified bit character. As amusing as Lampkin can be, don’t we have more important stories to focus upon? Unless, of course, Lampkin is the final Cylon. In which case, his visions of dead cats and waving of guns are portents of something more than a little frightening–a legitimately insane Cylon.

If anything, all this theorizing proves one thing: the Battlestar Galactica creators have succeeded in creating an atmosphere of paranoia. Some suggestions as to who the final Cylon might be almost make me recoil–can you imagine if Starbuck was not who we always thought she was? That sense of betrayal and shock and unease is surely something the characters on Battlestar Galactica will also share, giving us as viewers an intense emotional connection to the happenings on screen.

Be there this Friday at 10pm as the SciFi channel airs “Revelations” to see whether our choices are right or wrong, or if the show is going to leave us hanging and paranoid until 2009. 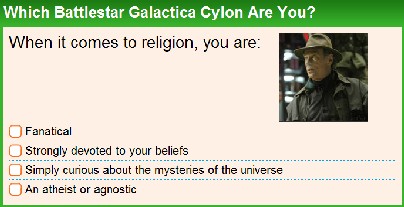