How “Stargirl” Fits Into DC’s Arrowverse

Stargirl is a DC once-and-future superhero. As the proud wielder of the Cosmic Staff, she goes back in the comics as a crime-fighting teenager, with roots as far back to World War II, later joining the Justice Society of America (JSA). In the modern TV version, Brec Bassinger plays the starring role of Stargirl, which has become a popular franchise that has run for two seasons, with the third season scheduled for 2022.

In the past and present, Stargirl and her other JSA team members find themselves crossing over to the larger DC Arrowverse. While this connection is explored only briefly in the TV show at first, greater crossovers are coming. Read on to learn more.

Courtney Whitmore is Stargirl. She grew up in Los Angeles, a well-liked, smart, and athletic high school student. But her life suddenly changes when her mom remarries, and they move to Nebraska, where she has a new stepfather and stepbrother, a new school—Blue Valley High—and a new home.

It turns out that Blue Valley is inhabited by members of the Injustice Society of America (ISA), posing as ordinary citizens and their children, moving there after killing the members of the JSA (setting up the conflict against Stargirl and the new JSA in the TV series).

Whitmore begins her journey to becoming Stargirl when she finds out that her stepdad was a sidekick to Starman, a superhero and Justice Society of America member. She also discovers Starman’s Cosmic Staff in her stepdad’s belongings—a 6-foot-long anti-gravity rod—and decides to “borrow” it, gaining superpowers such as flight, enhanced strength, and energy manipulation. 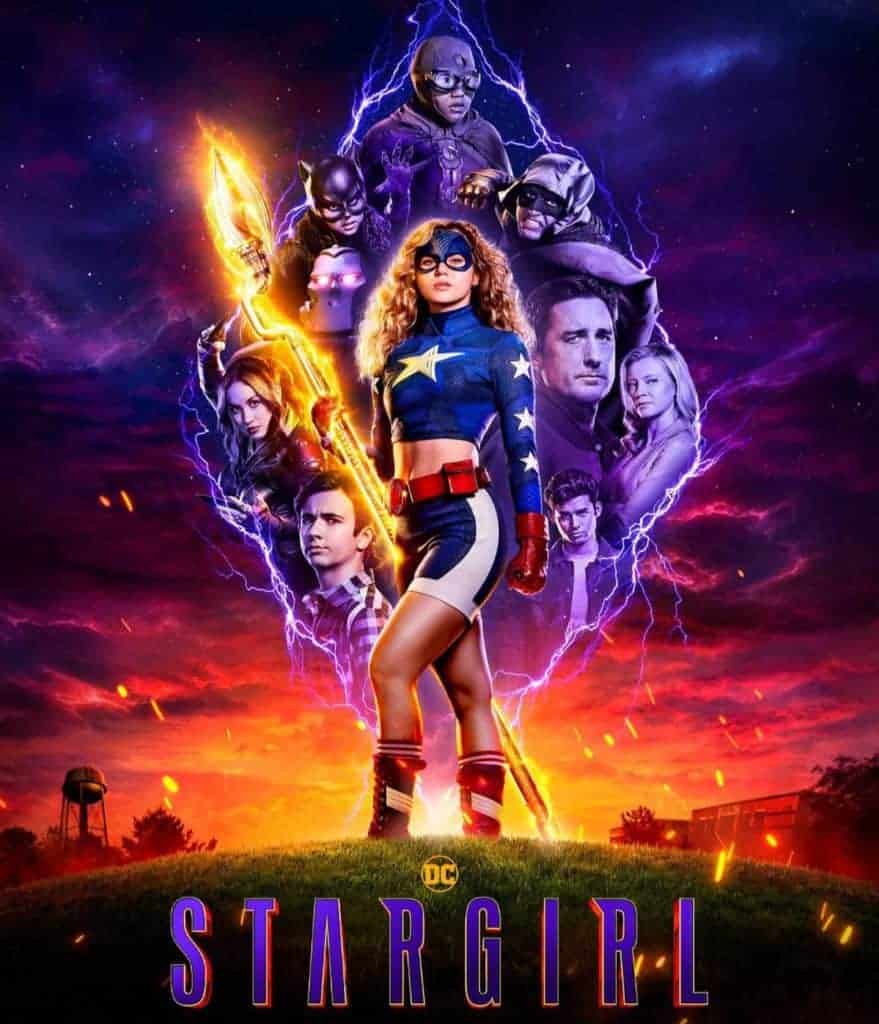 With the staff in her possession, Whitmore adopts the Stargirl alter ego and finds herself becoming the unlikely leader of the JSA, setting out to build a new team of superheroes. She is helped by her stepfather, Pat Dugan (Luke Wilson), who controls a giant robot called S.T.R.I.P.E.

In the original DC Comics, Whitmore joined the older version of the Justice Society of America, a team made up mostly of 1940s heroes and their legacies. When the original Starman’s son, Jack Knight, gave her the Cosmic Staff his father made, she changed her codename to Stargirl.

In the modern “Stargirl” TV series, Whitmore’s backstory is streamlined, with different characters, superpower paraphernalia, and massaged storylines—although many of the classic supervillains show up from the original series, including Brainwave, Shiv, and Icicle.

Comic book writer, screenwriter, film, and television producer, and director Geoff Johns originally created the character of Stargirl in 1999 for DC Comics as a comic book series. The character of Courtney Whitmore was named after his sister Courtney, who died in the TWA Flight 800 crash in 1996.

So far, two seasons of DC’s “Stargirl” have played, debuting as an original show on DC Universe, a video-on-demand streaming service run by DC Entertainment and Warner Bros. Digital Network, on May 18, 2020. The day after, the show premiered on the CW network, which aired new weekly episodes.

Halfway through the first season, CW picked up “Stargirl” exclusively for its second season. In this series, Stargirl and the JSA have to cope with the re-emergence of former ISA member Shade and the threat of Eclipso. (The first season also became available on HBO Max.)

See also The Cast and Characters of DC’s “Titans”

Connecting the past with the present, we have pivotal flashback episodes with Jay Garrick (John Wesley Shipp) as a guest character in the “Stargirl” series. Garrick was a member of the Golden Age Justice Society of America. As the superhero The Flash, he fought bravely alongside his fellow teammates until he died.

CW then announced a third season would premiere sometime in 2022. All three seasons feature 13 show episodes. In “Stargirl” season three (spoiler alert), Joel McHale will reprise his role as the original Starman.

What Is the Arrowverse?

The Arrowverse is a shared universe of DC superheroes (in the same vein as the Marvel Universe) who come from various interconnected TV series based on DC Comics superhero characters, airing for the most part on CW and the web series on CW Seed. So far, Arrowverse shows include “Arrow,” “The Flash,” “Vixen,” and “Legends of Tomorrow.” All four have the same production team, so the different series routinely cross over with one another.

Besides these series, there are also two that loosely connect to the DC Multiverse (for now): “Constantine” and “Supergirl.”

How Stargirl Fits Into DC’s Arrowverse

Before the “Stargirl” TV series premiered in 2020, the hero had a brief cameo on the Arrowverse crossover “Crisis on Infinite Earths,” establishing that the series exists on a parallel Earth (Earth-2) to the Arrowverse series. During these first teases, Courtney appears fully suited up with Pat’s S.T.R.I.P.E., as well as Rick, Beth, and Yolanda showing up as the new Hourman, Dr. Mid-Nite, and Wildcat.

An alternate version of the character, played by Sarah Grey, also appeared in season two of DC’s “Legends of Tomorrow”—a member of the Justice Society of America.

The showrunner Geoff John said he was thrilled to have “Stargirl” be part of the Arrowverse, but actual crossovers would happen when they make sense. Down the road, fans are hoping there could be crossovers with “The Flash,” “Supergirl,” “Batwoman,” “Black Lightning,” or “Legends of Tomorrow.”

BuddyTV Can Keep You Plugged Into the Arrowverse

Want to keep on top of the ever-expanding Arrowverse, including the heroic antics of Stargirl and her fellow JSA crimefighters? Then, tune into the latest updates and news on BuddyTV. You can also keep up with other DC Comics-based shows, including“Arrow,” “Green Lantern,” “Supergirl,” and “The Flash.”

We can help you follow the rocketing progress of Stargirl, perhaps joining the upper echelons of DC crime-fighting fame, besides the likes of Batman and Superman on Earth Prime.