My Adventures with Superman

The wait is over. After several years, a new Superman animated series is finally in development. If you’re a fan of the hero of Metropolis, you’ll be excited to learn about DC’s upcoming cartoon show, “My Adventures With Superman.”

President of Warner Bros. Animation and Cartoon Network Studios, Sam Register, is an executive producer on the show. He has stated the series will feature “rich, serialized, and engaging stories” about the iconic hero and his closest friends.

In this article, we’ll let you know what you can expect from the series and give you information about those involved.

When Is the Expected Release Date of DC’s “My Adventures With Superman”?

Cartoon Network and HBO Max have placed a two-season order for the show. While it doesn’t yet have a specific release date, “My Adventures With Superman” is expected to premiere sometime in late 2022 or early 2023.

Where Can You Watch DC’s “My Adventures With Superman”?

You’ll be able to catch episodes of “My Adventures with Superman” as they air on Cartoon Network or stream them on HBO Max.

What Is DC’s “My Adventures With Superman” TV Show About?

DC’s “My Adventures With Superman” is a coming-of-age story that follows the Man of Steel in his twenties. It chronicles Kent’s journey to becoming the iconic superhero. The show also features two of Kent’s closest allies, Lois Lane and Jimmy Olsen.

Kent, Lois Lane, and their best friend Jimmy Olsen are journalists for the fictional newspaper, the Daily Planet. While Clark comes to grips with his powers and starts developing his Superman persona, Lois quickly becomes a stand-out investigative journalist for the Daily Planet. She’s also helping a young photographer (Jimmy Olsen) build his career. Through their shared escapades, the trio discovers who they are as people.

The show will feature plenty of the action Superman fans crave. However, at its core, the series will be a romantic comedy that will feature the budding romance between a bumbling Clark Kent and a whip-smart Lois Lane.

So far, it’s unclear which villains Superman will take on in the series, but the president of Warner Bros. Global Kids, Young Adults, and Classics, Tom Ascheim, stated that Clark Kent in the upcoming show will be based on the late Christopher Reeves’ portrayal of the character from the Superman films of the late ’70s and early ’80s. In those films, Superman took on iconic villains like Lex Luthor, General Zod, and Nuclear Man.

Is DC’s “My Adventures With Superman” Appropriate for Children?

So far, there’s no evidence that “My Adventures With Superman” will have any content that isn’t safe for children. And judging by the fact that the series will appear on Cartoon Network (not the channel’s adult-themed property, Adult Swim), it seems likely the show will be aimed at children. Also, the show’s development was initially announced in May 2021 by Amy Friedman. Friedman is the Head of Kids and Family Programming at Warner Bros.

See also The Cast and Characters of DC’s “Titans”

However, that doesn’t mean it will be appropriate for children of all ages. A number of the animated shows featured on Cartoon Network, like “Johnny Bravo,” “Teen Titans,” and “Chowder” have earned TV-Y7 (may not be appropriate for children under 7) or even TV-PG (may not be suitable for younger children without the guidance of a parent) ratings due to things like moderate violence and suggestive dialogue.

Who Are the Main Characters of DC’s “My Adventures With Superman”?

At this point, only the show’s three main protagonists have been announced. As it nears its release date, it’s likely more of the series’ cast will be revealed. Here’s a rundown of the characters who have been announced so far and a few of the actors who will voice them. 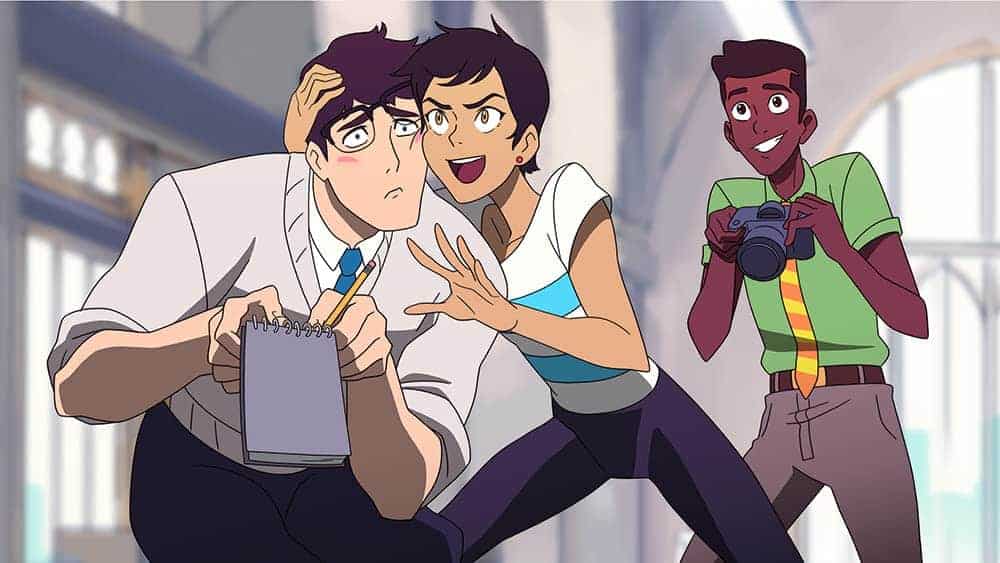 In the Superman comics, Kent’s real name is Kal-El. He’s an alien from the planet Krypton. He’s sent to Earth by his parents when his home planet is destroyed. He lands in a rural town called Smallville and is raised by farmers (the Kents). When he’s not using his abilities of super strength, flying, X-ray and heat vision, and invulnerability to fight crime, he moonlights as a shy, clumsy reporter in Metropolis who’s hopelessly in love with Lois Lane. The character will be voiced by Jack Quaid, who you’ll recognize from “The Boys.” Quaid also does voice work for the animated show “Star Trek: Lower Decks.”

In the comic series, Lois has always been the classic love interest of Clark Kent. She’s a decorated, intelligent reporter from Metropolis. “My Adventures With Superman” will focus on the beginning of Kent and Lane’s relationship. The character will be voiced by Alice Lee from “Zoey’s Extraordinary Playlist.”

In the DC comics, Olsen is the young, wide-eyed best friend of Superman and Lois Lane. He’s a photographer for the Daily Planet who looks up to his co-workers as role models. Typically, Olsen is drawn as a pale redhead, but “My Adventures With Superman” will feature a fresh take on the character. In the show, Olsen will be African American. The voice actor for the character hasn’t yet been announced.

For updates and trending news about all the thrilling new animated series and live-action shows coming to your favorite streaming networks, like Amazon Prime, Netflix, and HBO Max, keep checking in with BuddyTV.