Is Cancel Culture Affecting Our Laughs?

If ever there were a time people needed a good laugh, it would be right now. But is it harder to be funny in today’s world of cancel culture and heightened sensitivity? Some of the world’s most prominent comedians have been deemed “horrible people,” while the remainder may feel overly restricted. Other comedians, however, insist that cancel culture has a point. So how does the audience feel?

We spoke to 1,124 people in the U.S. to share their thoughts on today’s comedy scene. Has political correctness killed the comedy club? Are comedians being held accountable enough for offensive jokes? What topics will people tolerate and what’s a cancelable offense? Are certain generations more easily offended than others? And which comedians are today’s most and least loved? For insight into the state of comedy in 2021, keep reading.

To set the stage for our study, we first asked respondents to choose which decade they thought represented the golden age of comedy. We also noted the most and least popular ways of consuming comedy content and how different generations and political affiliations responded to the question of how risky it is to be a comedian in this day and age. 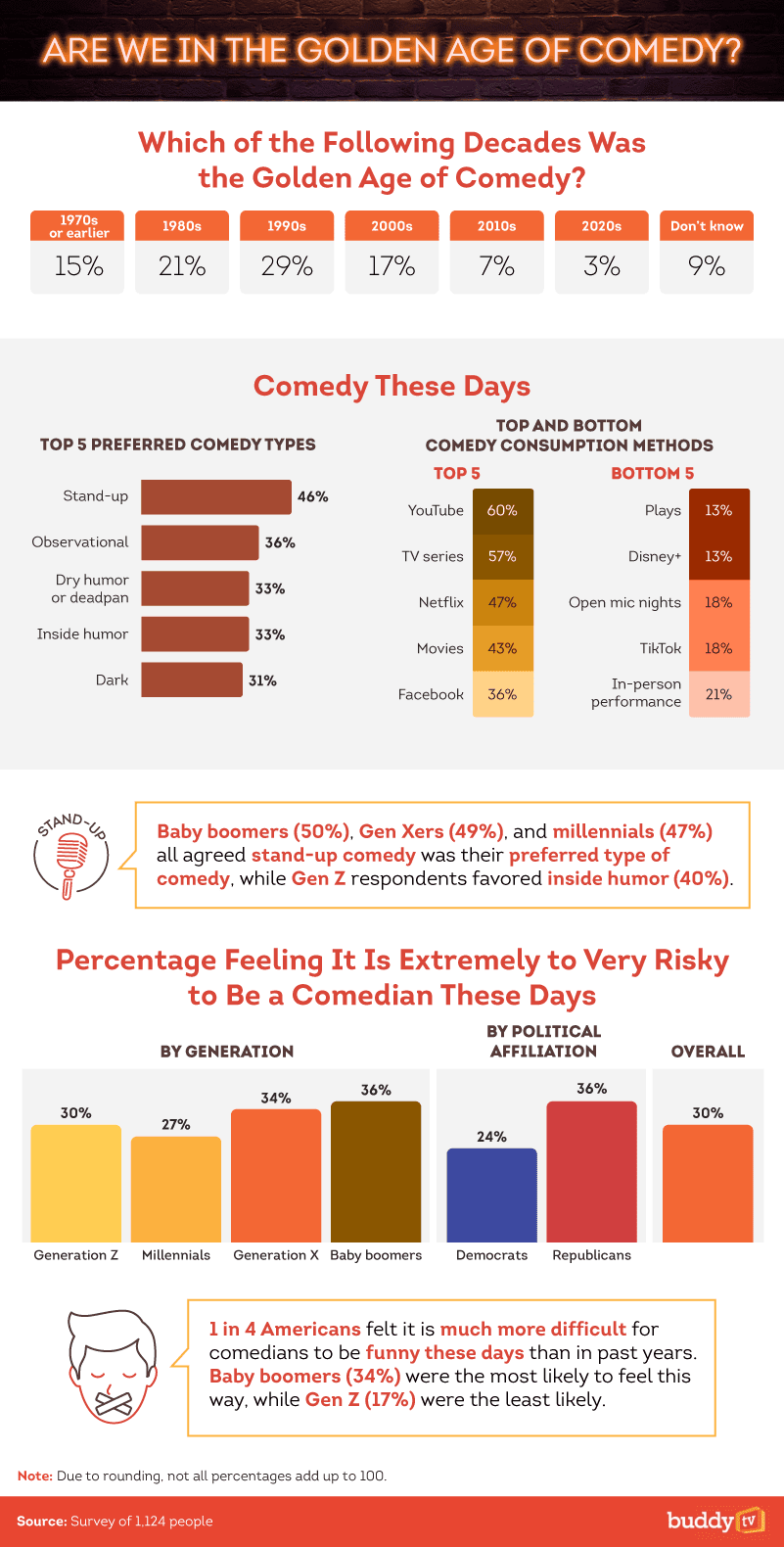 The majority of our respondents named the 1990s as the golden era for comedy. This was the decade of powerhouse shows like “Seinfeld,” “Friends,” and “The Fresh Prince of Bel-Air” and included the rise of Ellen DeGeneres and Roseanne Barr as well. Twenty-nine percent of respondents chose this decade as their personal favorite. Stand-up was the most popular type of comedy, with most using YouTube (60%) or myriad TV shows (57%) to access their laughs.

When we asked if being a comedian had become an overly risky profession, only 30% of respondents overall agreed it had. That said, 1 in 4 respondents said it was much more difficult to be funny today than in years past. Older respondents and Republicans were both more likely than other demographics to feel that it was risky to be a comedian in today’s culture.

Is there ever a time when you truly deserve to be canceled? This section of our study asks respondents which jokes they find most offensive and which they think justify canceling the comedian in question. Responses were filtered by gender, generation, and political affiliation.

The most offensive topic for comedians to joke about was disability, with 43% of respondents saying they were affronted by exploitation of this issue. Of the many things former President Donald Trump was criticized for, multiple polls found his mocking of a disabled person to be the most egregious. This may also be why Democrats were 5 percentage points more likely than Republicans to find disabled jokes offensive. More than a third also felt that jokes about abusive relationships and mental health crossed the line into offensive territory.

People also appeared more ready to cancel comedians when specific topics were raised. When asked if any joke topics merited cancellation, 57% replied yes for disability-related content, 52% for abusive relationships, and 50% for mental health. Republicans most often cited jokes about children and mental health as grounds for getting a person canceled. Democrats appeared more offended than Republicans by jokes about LGBTQ+ and minority groups.

The Impact of Cancellation

The recent trend for canceling offensive comedians has certainly impacted those who remain in favor, for better or for worse. The next section of our study asks respondents how problematic they find cancel culture to be in general as well as for the comedy scene specifically. Responses were then broken down by generation, ethnicity, political affiliation, and sexual orientation.

More than a third agreed that cancel culture made it more difficult to be a comedian today than in years past, while nearly half agreed that it had hurt the comedy scene. Black and African American respondents were most likely to agree with this statement, agreeing that cancel culture was either very or extremely intrusive. Gen Z and Gen X also tended to side with this logic more often than other generations.

The study ends with a look into respondents’ perceptions of specific comedians. From Bill Cosby to Ellen DeGeneres and Dave Chapelle, we asked respondents to say whether they liked or disliked each comedian, as well as whether they found them offensive. 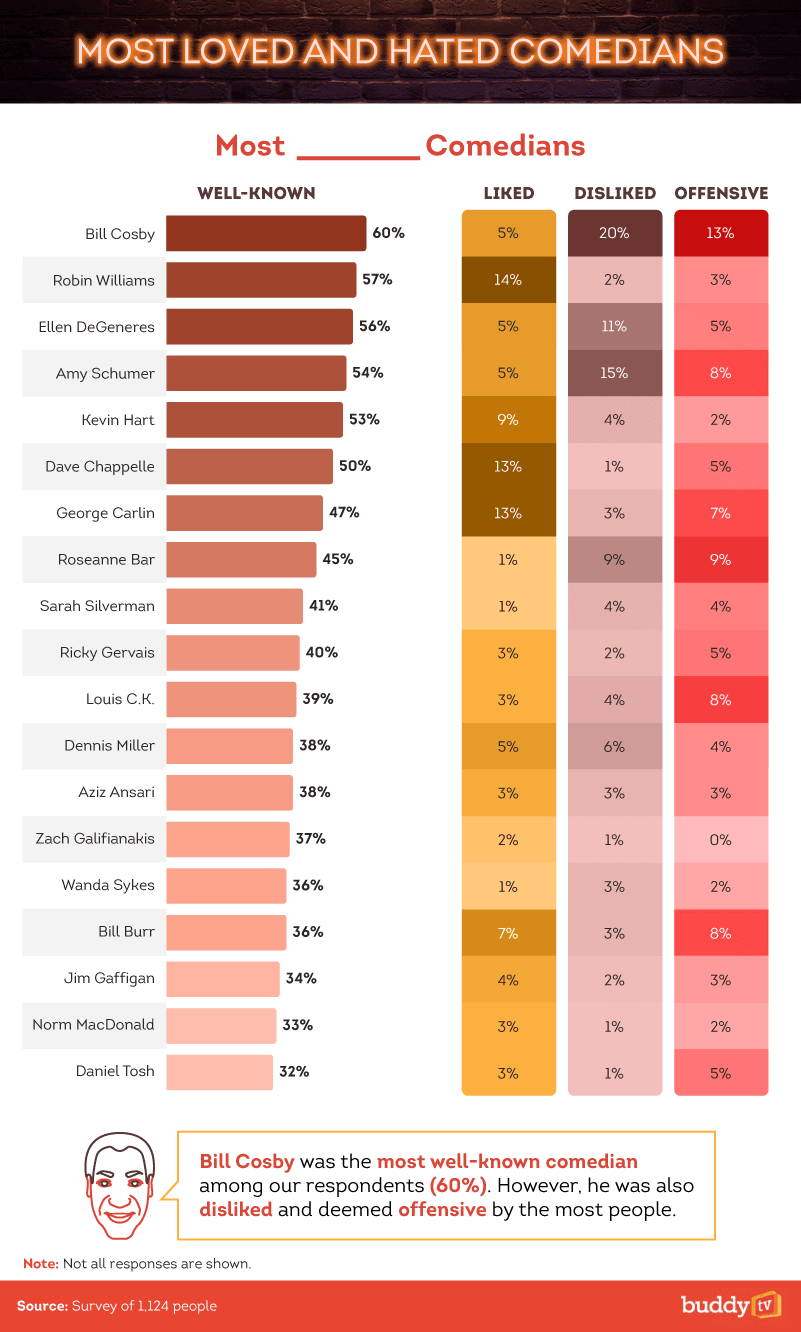 Bill Cosby was by far the most disliked comedian, which likely has little to do with his comedy and a lot to do with not only being accused of the sexual assault of countless women but for recently being released after the conviction was vacated. Only 5% of respondents said they liked Bill Cosby. In a strong case for gender-based discrimination in the comedy world, the next three most hated comedians after Bill Cosby were all women: Amy Schumer, Ellen DeGeneres, and Roseanne Barr. Even Louis C.K., who was also the subject of several sexual misconduct allegations, was disliked less often.

Roseanne Barr specifically was known as the next most offensive comedian after Bill Cosby. Roseanne Barr was literally canceled by her host network, ABC, after Barr posted a racist tweet about Valerie Jarrett, an African American senior advisor to Obama. She did later apologize, but it appeared to be too late. And although Bill Cosby was the most disliked comedian overall, this wasn’t the case when it came to Republicans specifically, who were more likely to dislike Ellen DeGeneres (16%) and Amy Schumer (20%) than Cosby (14%).

Keeping Up the Laughter

Respondents, fortunately, revealed that even in the face of cancel culture, comedy is still alive and well. Most were still avid consumers of comedy in some way, and even the most “offensive” comedian was only offensive to 13% of people. While gender, generation, and political affiliation did influence opinions, most agreed that cancel culture had yet to cancel comedy.

If you’re in the mood to watch something that makes you laugh, you just have to know where to look. At BuddyTV.com, we’re dedicated to helping you find the perfect show, as well as giving you all the information you may want as a fan. BuddyTV.com offers everything from forums to news about TV programs, celebrities, and sports. Head to our website today to find your next great laugh.

We surveyed 1,124 people who watch or listen to comedians. Among them, 57% were men, 42% were women, and 1% identified as nonbinary. For generational breakdowns, the sample sizes were as follows:

For political breakdowns, the sample sizes were:

For short, open-ended questions, outliers were removed. To help ensure that all respondents took our survey seriously, they were required to identify and correctly answer an attention-check question.

These data rely on self-reporting by the respondents and are only exploratory. Issues with self-reported responses include, but aren’t limited to, exaggeration, selective memory, telescoping, attribution, and bias. All values are based on estimation.

Today’s world could use a good laugh. But apparently, it takes careful consideration to make that happen without offending anyone. Feel free to share this data; just be sure your purposes are noncommercial and that you link back to this page.

‘The River’ Interview Video: Joe Anderson Talks About the New Show and Fear