Fans who watched “The Suicide Squad” movie quickly fell in love with the character Peacemaker, played by John Cena. At the end of the movie, things looked dire for the antihero. However, in the post-credit scene, it was revealed that he had survived being shot. Even better news for fans of Peacemaker, DC Comics and Warner Bros. had announced even before the movie released that Peacemaker would be getting his own Suicide Squad spinoff series. The newest part of the DC Extended Universe is set to premiere in early 2022.

If you’re part of the DC fandom and are eagerly awaiting the release of episode one, keep reading for your first look at the show. We’ll cover the latest news about the premise, the characters you can expect to see, and who will make up the cast. As more information becomes available, we’ll keep updating our website, so make sure to keep checking back.

Peacemaker, the antihero persona of Christopher Smith, believes in peace. In fact, he’ll kill anyone who gets in the way of achieving that peace. The comic book character originated in 1966 at the hands of Joe Gill and Pat Boyette. He arrived in the DC Comics universe after being acquired in the 1980s.

“The Suicide Squad” movie that came out in 2021 was the first time Peacemaker’s character joined the DCEU and was seen on the big screen. We don’t learn much from the movie about his background, but we do know that while Peacemaker doesn’t have his own superpowers, he has the ability to hold his own (and he has a lot of weapons at his disposal). We also know he comes with an off-kilter sense of humor and a questionable moral compass.

In October 2021, the full-length trailer for the show was released. We can see from the trailer that speculation that the show would be a prequel to “The Suicide Squad” movie was wrong. Instead, it appears to be more of a redemption arc for Cena’s character. Peacemaker is one of only a few Suicide Squad characters to finish the movie alive, and he betrayed several of the characters in the process.

Now, he’s got to learn to work with and trust a new team. We get to see some familiar faces reprising roles in the series and meet some new characters, including Peacemaker’s father, which should lead to an interesting origin story.

When Will the New “Peacemaker” Series Premiere?

The release date for the first episode of “Peacemaker” is Jan. 13, 2022. Season one will include eight episodes, which we assume will be released once per week and then be available to stream on-demand. Season two has not been confirmed yet but the series creator, James Gunn, is hopeful for the renewal.

Gunn also wrote the series during what was supposed to be a break before filming the next Marvel “Guardians of the Galaxy Vol. 3” movie. He directed several of the episodes, as well. The remaining episodes are directed by Rosemary Rodriguez, Jody Hill, and Brad Anderson. Gunn and Cena are both producers on the series, as well.

Who Are the Main Characters of “Peacemaker”?

While we may not know every character who will appear in the eight-episode season, we do have a good idea of the main cast members. 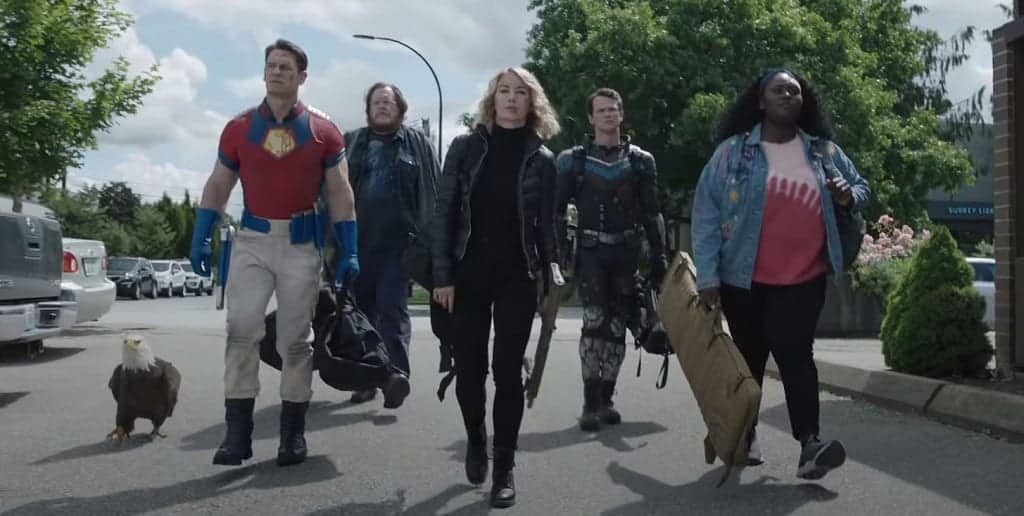 After it’s revealed that Peacemaker survived being shot by Bloodsport at the end of “The Suicide Squad” movie, we get to see him learn to work with a new team in the series. He’s an unstable antihero who pursues peace at any cost — killing anyone in his way. Cena himself has called Peacemaker a “douchey Captain America,” and the series will dive further down into what makes him tick.

Harcourt is a logistics officer for the Task Force X team. Her character is relatively new, but we did briefly meet her in “The Suicide Squad” movie.

A leader of Task Force X, Murn is responsible for how the team functions, including with its new member Peacemaker.

Economos has been around in various forms for a while, starting out as an administrator for Task Force X before losing faith in its leader, Amanda Waller, and walking away. He’s back, handling operations for this new iteration of the team.

Adebayo is new to the universe. We don’t know much about her role in the show but it’s sure to provide a lot of fun as she interacts with Peacemaker. Fans will recognize Brooks from her previous role in “Orange Is the New Black.”

Chase began as a New York City district attorney. After his family was killed by criminals, he turned into a crime-fighting antihero.

Smith is Peacemaker’s father. Don’t expect him to be similar to the father from the comic books — that iteration was a war criminal who killed himself in front of his son. His character in the show is sure to bring plenty of drama and baggage with him, though.

Song will be a recurring character. She’s a police officer who works with Captain Locke.

Captain Locke is also a recurring member of the police force who has ties to Peacemaker.

Fitzgibbon is Song’s partner on the police force.

Jamil will be a recurring character in the series, but that’s all we know so far. Fans will recognize Manji from “Perfect Harmony,” “Mr. Robot,” and “Schitt’s Creek.”

Who Are the Villains in “Peacemaker”?

There are certain to be all sorts of hilarious interactions with villains in the series. However, right now, we only have good intel on one villain, who will recur regularly on the show. That character is Judomaster, played by Nhut Le. He’s a master of hand-to-hand combat. The original version of this character came out of World War II, so we can expect his background to be vastly different.

Several recurring characters have been confirmed for the “Peacemaker” cast, but because they are so new to the universe, it’s hard to say right now if they are heroes or villains. For example, Alison Araya and Lenny Jacobson have been cast as married couple Amber and Evan. These characters appear to be straight from the brain of Gunn himself.

Where Can You Watch Episodes of DC’s “Peacemaker”?

The show will run on HBO Max, which is quickly becoming the home for all things DC — from iconic movies to new spinoff series and even more blockbusters. To watch the HBO Max series or any of the DC Extended Universe, you’ll need to be an HBO Max subscriber.

Learn More About the Latest DC Shows and Movies on BuddyTV

John Cena’s Peacemaker in “The Suicide Squad” movie quickly became a fan favorite. The humor and action he brought to the film combined to bring him into our hearts. We expect even more with this new series. The more we learn about the characters we can expect to see in DC’s “Peacemaker” series, the more excited the DC fandom gets for the premiere.

Fans don’t have long to wait. In the meantime, keep checking back with BuddyTV for all the news and updates related to “Peacemaker” and all of your favorite DC shows and movies.