Dean Winchester certainly hasn't had the best luck during the third season of Supernatural. Not only is he destined to kick the bucket by the end of the year thanks to a deal with a demon, but he's already died a couple hundred times thanks to the Trickster and his crazy time twisting magic. On top of that, Dean's had to deal with Sam's (Jared Padalecki) slow slide to the dark side, and he's also been forced to contend with Bela (Lauren Cohan) and her Colt stealing ways. Sometimes a guy just can't catch a break. Despite Dean's run of bad luck, Jensen Ackles keeps a positive outlook regarding the series and his career goals. The actor recently spoke with the Australian magazine TV Week about how the Winchesters make a living, the most outrageous thing he's ever read about himself, and what the brothers would probably smell like in real life. 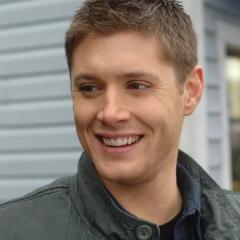 One thing I've often wondered about the series is how the Winchesters make a living. Yes, we've heard of them running schemes and seen a few things here and there, but it's not something the show focuses on very often. Ackles points out that, "Dean's a bit of a pool shark and also a bit of a gambler. It doesn't really show it all the time, but it's definitely implied that there are poker games and pool matches that they can win some money on. And who knows? Dean's a promiscuous kind of guy. Who knows how he drums up the funds that they use?"

Though Ackles doesn't reveal many Supernatural secrets in the interview, he does mention that the Winchester boys probably don't get a chance to bathe and do laundry as often as they should. "They stink like cow patties," he jokes. "We live out of our trunk and we smell like crap. And I can attest that Jared does smell like crap most of the time."

Being on a hit TV show can cause people to spread all sorts of strange rumors. Ackles says that the weirdest one he's heard involved a secret marriage that he knew nothing about. "The funny thing about working on a show like this is that the fans are very protective," he points out. "If something is written on the internet, it's amazing how quickly the fans will attack them and police them and say, 'No, this is not correct. Don't write this. You're off the message boards' or whatever. But there was quite a long thing for a while where people were arguing about the fact that I was married to some girl I'd never heard of. It was a bit bizarre. It was like an ongoing discussion for a year about whether or not I had this secret marriage to this girl I'd never met."

As for his post-Supernatural career, Ackles hopes to tackle more film work, but certainly doesn't expect miracles to happen right away. "I'm not looking for overnight success or to be the lead of a major motion picture tomorrow," he says. "What I'd really like to do is get on the set with people who I admire and respect, and learn from them and let myself grow into roles, as opposed to getting a role and trying to grow into it in a month. To be on the set of a movie that has an amazing director and watch him direct other people — give me a small role on the film, give me one scene with a DeNiro."

However, until the big screen starts beckoning, Ackles will be happy to continue being a Winchester. He admits that he especially enjoys the various ways the character has evolved since the first season. "In the beginning, I tried to use a lot of myself because I was still finding the character," Ackles admits, "but as the years progress and the character's progressed, he's definitely taken on a personality of his own. He's definitely a character. So it's neat for me to walk on the set and put those clothes on."