One of the secret weapons behind Supernatural‘s success is writer/producer Sera Gamble.  She’s been writing for the show since the first season and has been responsible for some of Sam (Jared Padalecki) and Dean’s (Jensen Ackles) more memorable adventures, including the final pre-strike episode, “Jus in Bello.”  Gamble recently spoke with Firefox News about what fans can expect when Supernatural returns in April, as well as the chances of the show being renewed for a fourth season. 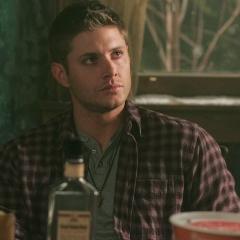 Gamble points out that the script for the next episode was nearly completed before the writers went on strike.  However, the episode may not be what fans expect after the dense mythology of “Jus in Bello.”  Gamble says, “It’s a light, high-concept episode – shot entirely in documentary style by these bumbling would-be ghost hunters we introduced in Season One.  The whole hour is the ‘pilot’ of a cable show called Ghostfacers!  So it’s quite a departure from our usual structure.  And it’s completely self-enclosed and breezes right past all the mythology we set up in ‘Jus In Bello’, which was great when we had lots of time before we had to close in on the end of that arc.  But being part of the final run of this shortened season, being the first episode when we come back, gives it a sort of importance that it’s definitely not engineered for.  We all laugh about it — it’s just one of those out-of-our-control things that happened because of the strike, and we rolled with it.  I think our audience will too — they’re savvy, and they’ll get it.  And it’s a wildly entertaining episode, so for my part, I’m glad we get to do it.  I would have been so sad if the strike went longer and it didn’t get shot.”

One thing fans have been worried about is how the shortened episode order would affect the remainder of Supernatural‘s third season.  “Some story threads were condensed, and some were set aside for next season,” Gamble admits.  “We had to be creative with the storytelling, but these weren’t difficult decisions to make.  It was obvious which story had to be serviced:  Dean’s demon deal.  His time’s running out; he’s going to hell.  They’ve got a very short time to try to save him.  The Season Finale takes place on Dean’s last day.”

For those interested in seeing more women in the Supernatural world, Gamble also mentions that saloon owner Ellen will be returning in the season finale.  As for Ruby (Katie Cassidy) and Bela (Lauren Cohan), they’ll be playing big roles in the mythology throughout the rest of the year.  “Ruby is invested in the demon war and in Sam; we’ll see more of her in that context,” Gamble promises.  “I’m enjoying her role in that story arc, because even though she’s proven herself time and again to be a strong ally, there’s always that underlying tension.  Because she’s a demon, and everything Sam and Dean know of demons tells them not to trust her.  As for Bela — well, she swiped the Colt and led Henriksen to the boys, which led to a bunch of demons attacking them.  Dean is pretty into the idea of killing her.”

While the remainder of season 3 sounds exciting and action packed, what are the chances for a fourth season?  Gamble says, “If this were Vegas and I had $100 in my pocket, I’d put $92 on a Season Four pickup.  Then spend the other $8 on a strong drink if I’m wrong.”