One Tree Hill has a new look for season 7, and one of the major parts to that overhaul was bumping Austin Nichols up to a series regular as Julian, Brooke’s beloved movie producer.  The season 7 premiere saw the two making out on the beach quite a bit, and while Brulian lovers could certainly watch those two go at it all day long, Tree Hill relationships are never that simple.

I spoke to Austin about the new season of One Tree Hill, and he revealed some spoilers about what Julian is up to and which character from his past will return, what (or who) will cause some trouble for Brooke and Julian’s relationship, and when we’ll get to see Julian hanging out with Jamie.

-Brooke and Julian found themselves in a very good and happy place on the season 7 premiere, but Nichols says it won’t stay that way for long.  “I’d love to kiss a pretty girl on the beach all the time, but it’s definitely gonna get messy.”

-Who will be the person throwing “a wrench into the gears” of the Brulian romance?  Fans will get a chance to find out this week, as Nichols teased Monday’s episode by saying the new girl, actress and Clothes Over Bros model Alex Dupre will get in Julian’s face and definitely cause some trouble for Brooke.

-Speaking of Alex, Nichols had plenty of good things to say about the actress who plays her, Jana Kramer, and it’s not just because the two briefly met when they were both guest starring on Friday Night Lights.  “She’s murdering her role.  She’s funny and mean and heartbreaking all at the same time.”

-For the first several episodes of season 7, Julian will continue to have most of his scenes with Brooke, though Nichols did mention that Julian’s dad will also come back.  The movie world will also be important as Julian struggles to find out how his film world and his personal life in Tree Hill can blend together.

-As far as One Tree Hill spoilers go, Nichols revealed that this season, Julian is hard at work on a new script to use as his next movie project.  He also revealed he will start to work with cast members other than Sophia Bush starting around episode 7 or 8, and that in one episode, he has quite a few scenes with Jamie.

-When it comes to how often the male stars of One Tree Hill remove their clothes, Nichols actually appreciates the fact that this show reverses the roles, as it’s usually the women whose bodies are exploited and used in film and TV, but here, it’s all about the men.

-FAN QUESTION: BonesFan47 wanted to know who his favorite person to work with is.  After taking some time out to discuss the user’s screen name and the fact that Nichols has a direct connection to the show Bones, he mentioned how great it is working with Sophia, but he also singled out Jackson Brundage as Jamie because Nichols is impressed by the differences in child actors.

-FAN QUESTION: PeytonMelissa wanted to know how Austin Nichols prepares for the role of Julian.  It turns out that there isn’t a whole lot of prep work needed, because Julian is pretty close to the real Austin.  Working in the TV industry helps to make playing a producer a bit easier, as does the fact that is brother is a filmmaker. 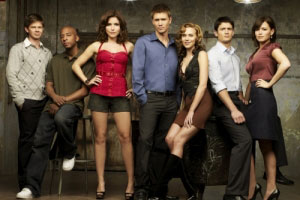 Best ‘One Tree Hill’ Quotes from the Series Finale

‘One Tree Hill’ Series Finale Preview: A Love Letter to the Fans