10 Secrets of the ‘Deadliest Catch’ From Catchcon

BuddyTV’s David Niu dropped by Catchcon 2010 in Seattle last weekend, an event all hardcore fans of the Discovery Channel’s popular cable show Deadliest Catch know well.  Niu asked the show’s producers and ship captains to divulge 10 secrets show fans might not know, like who still gets seasick, who wants whiter teeth and how to prepare for that first trip to sea. 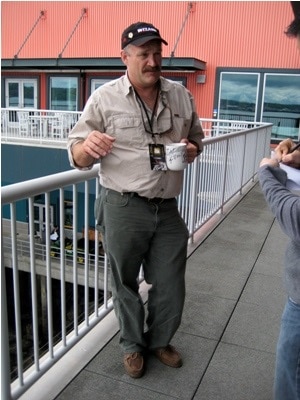 10. Captain Sig Hansen said that the crew doesn’t usually eat much crab because it’s messy ad the boat is rolling so much, but it’s a delicacy that they enjoy normally at the end of a trip.

9. Captains Johnathan and Andy Hillstrand said that each year their boats are very likely to get stuck in an ice floe, an event that makes navigating through ice blocks with boat hulls only 5/16″ thick (much thinner than even the Titanic) an adventure that’s not for the weak-hearted.

8. All four captains agreed that the show’s editing is fair.  What you see is what you get.

7. Captain Sig Hansen said that he enjoys the first few days of a trip the most because he doesn’t have to answer the film crew’s questions–since they’re usually seasick.

6. Producers film more boats and captains than the ones that actually make it on the show.

5. The Northwestern is the only boat to have Internet access.  Captain Sig Hansen uses video chat to talk to his family while he’s out crabbing.  But the main reason that he installed Internet access is to receive weather reports when other information sources are unavailable.  Hanson shares these reports with other boats when foul weather makes them unavailable.

4. If you love Captain Sig Hansen, buy his book, and send him some teeth whitener since he thought my teeth were really white.

3. Captain Keith Colburn shared how a new deck hand should prepare for his first turn at sea.  First, use the Internet to research where the major ports are and where the fleet is tied up.  Second, show up to the docks one month before the ship leaves to pound the docks.  And finally, bring a good attitude.  He also prefers endurance athletes instead of quick-burst athletes because crab fishing is no sprint.  Hansen advocates getting a job at a cannery and then meeting crew members at the local bars.  If you get in good with them, and they need people, the crew will likely hunt you down for your first greenhorn gig.

2. Producers Matt Renner and Jeff Conroy revealed that Edgar Hansen of the Northwestern and Johnathan Hillstrand of the Time Bandit still get seasick at the beginning of each season.

1. Initially Captains Hillstrand, Hansen and Colburn said the small fraternity of crabbers initially resisted the idea of being filmed.  They only relented because it was sold to them as a one-time documentary that they could leave behind as a tribute.  Still, other captains were critical, but now there are more boats signing up for an appearance on the show than the producers can film.