During the third season of ABC’s Grey’s Anatomy, Dr. Burke, played by Isaiah Washington, suffered a gunshot wound that left him bedridden and out of commission.  In came Brooke Smith’s Dr. Erica Hahn, a cardiothoracic surgeon at a neighboring hospital who substituted for Burke at Seattle Grace.  While Smith loved the role, she wasn’t expecting it to become a permanent gig.

“I didn’t really think it was going to work out,” Smith told The Daily News. 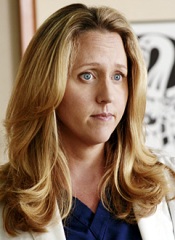 However, things took a different turn when the network decided not to renew Washington’s contract.  With the actor out of the show and his character out of Seattle Grace, Smith was called back to not only to reprise her role but to act as the hospital’s new head of cardiothoracic surgery.

Apart from it being a full-time job, Brooke Smith decided to give Grey’s Anatomy another go because it gave her the chance to explore a character for a longer period of time.

“When I work on something that has a beginning, middle, and end, I can create an arc.  With Dr. Hahn, I need to figure out who she is,” Smith said.

With that in mind, the 40-year-old actress has been busy doing research, which includes watching heart surgery at a Los Angeles hospital and enlisting the help of the real surgical nurses who are assigned to the operating room on the show.

“It really stressed me out a lot,” Smith said.  “I didn’t go to medical school.  I have no idea what it really is to be a surgeon and yet I have to act like I am really good at it.”

Unfortunately, Smith and her fans would later be let down when Dr. Erica Hahn abruptly left the show during season 5 of Grey’s Anatomy. Her leave was during episode 7, titled “Rise Up” on November 6, 2008.

Grey’s Anatomy creator Shonda Rhimes stated that they didn’t believe the “magic and chemistry” of Erica Hahn’s character would sustain in the long run of the show.

Check out more articles such as Everything You Need to Know About Grey’s Anatomy on BuddyTV now! You’ll find interesting info about characters, showtimes, romance, and more on Grey’s Anatomy.