The season 5 premiere of Supernatural was preceded by the launch of a surprising and effective Twitter campaign in which fans used the hash tag "#LuciferIsComing" to raise awareness for Supernatural.  Sadly, that endeavor was cut short when a group of all-too-serious people, scared that Satanists were taking over Twitter, fought back with "#GodIsHere." 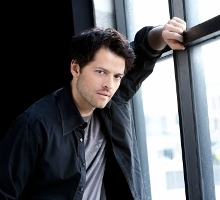 The origin of this counterattack was none other than music mogul P. Diddy, so this week, led by none other than Misha Collins, the Twitterverse will once again be the board on which an epic game is played.

At Misha's behest, fans should use the hash tag "#PDiddyIsScaredOfHisTV" this Thursday to both promote another new episode of Supernatural and to strike back against the man who shut down last week's campaign.  However, to ensure it is done properly, there are some ground rules everyone wishing to participate should follow.

To get the scoop on how it should go down, check out this YouTube video from Supernatural fanatic Little McKay, over in Scotland.  She'll give you your instructions for battle.

So suit up, Supernatural fans, because this Thursday, it's time for round 2.  This time, it's personal.