If Supernatural fans wanted to get their message out, they went to the right place.  This morning a Twitter crusade rose on the popular social networking site as Supernatural fans tweeted the phrase "Lucifer is coming" in honor of tonight's season 5 premiere in which the prince of darkness rises to Earth. 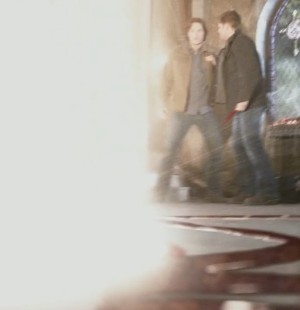 The fans successfully made it one of the popular trending topics on Twitter (at one point this morning, Supernatural held five of the top trending spots).  But a bit of a controversy broke out which caused Twitter to remove "Lucifer is coming."

It turns out some people, unaware that this was a Supernatural shout-out, feared Satanists were taking over Twitter and spouting their own rhetoric, leading rivals to tweet "God is here."  And though it's not clear where this backlash started, many Supernatural tweeters are blaming none other than Diddy (aka Puff Daddy, P. Diddy, Sean Combs, etc) who tweeted about using God's army to defeat the devil.

This epic tweet war between good and evil lasted a short time before Twitter took down the messages after receiving several complaints.

While it's sad that a simple Supernatural slogan caused such an uproar, it could be good news, as the controversy does even more for the show, airing tonight at 9pm on the CW, than the initial campaign did.

People talking about Supernatural is good.  Whether it's in the form of like-minded fans gathering to warn that Lucifer is coming, or frightened pious tweeters who think it's the end of days, Supernatural made a little news today, and tonight, it will undoubtedly make fans go even crazier.