Interview with Emily and Zooey Deschanel of ‘Bones’ 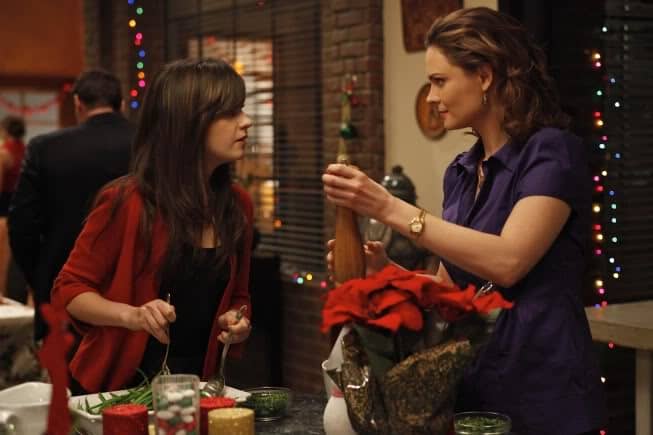 Zooey will be joining big sister Emily this Thursday on Bones’ annual Holiday episode, “The Goop on the Girl.” I had a chance to chat with both Emily and Zooey during a conference call about working together, their childhood Christmases, and  more. The two are definitely sisters, Zooey and Emily spent the majority of the interview taking over each other, laughing at each other, and sounding virtually identical. It was difficult to keep them straight, but an absolute delight to listen to. Behold, the most adorable interview ever.

Emily: “It was great, especially I think that first day was less hectic.  We had a scene.  It was just Ryan O’Neill and the two of us.  It was really nice.  It was great.  We’ve never worked together before, except for our own plays that we’ve done together, right? “

Did you learn anything about each other you didn’t know?

Zooey: “I don’t know if I would say I learned anything.  But I definitely had a really good time.”

Which one of you started acting first?

Zooey: ” I feel like even though I’m younger, I started working first professionally, but we both were interested in acting as kids.  Emily finished school first.”

Emily: “I think we both loved doing plays since we were really young.  But I didn’t think of it as doing it as a profession.  I think Zooey knew she wanted to be an actress from when she was very young.  Whereas I didn’t think I wanted to do that…”

Zooey (interrupting): “Yes, you wanted to be an architect. I think you liked the way it sounded, maybe.”

Emily: “No, I love architecture. I just love the combination between art and science, I guess. So I don’t know, but then I started doing plays in high school and really loved it and considered it as a profession as I got later in high school.”

Did the older sister, younger sister dynamic play a role on the set at all?

Zooey: ” It’s more like it was Emily’s set, so I was happy to be working for her to some degree, I guess.  You’re a producer on the show, so–“

Emily: “I guess that’s true.  You are performing–you’re one of my favorite employees.”

Zooey: “Thanks.  So, it was actually really very smooth and I had a great time.  I loved working with Emily.  It was really fun”

Zooey: “I think we try to do as much as we can.  Emily, obviously, being on a show, there’s so much more output.  I mostly do movies, so it’s like I’ll come out with something like once or twice a year and Emily has something on every week.  So it’s a lot to keep up with, but I try the best I can.”

Emily: “And I try to see pretty much everything Zooey does.  Some things are harder to see because they’re either–they only have a limited release or whatever. We’re supportive, but not fanatical.”

Are there any other successful sibling sisters that you guys admire, siblings or sisters?

Emily (interrupting): “They did not get along, though. The Kardashians, of course.”

Emily: “That’s such an interesting question–I’m trying to think, there’s the Arquettes. They’re cool.  We like them.  I don’t know.  My mind goes blank.”

Zooey: “I like those sisters who design Rodarte.  They’re cool.”

Is there something in your DNA that you guys think helps makes you guys successful?

Emily: ” Yes, because we both grew up in the same household.  I think of things that are more nurture in that, we grew up in a household where our mother is an actress, so our parents couldn’t really tell us not to be actors, because that would be hypocritical.  But yet we were also–saw a lot of actors, family friends and our mother.  We saw lots of people struggle.  It’s a hard business.  It’s a hard profession to pursue, so we didn’t have any delusions.”

Zooey: “I think, too, there was no sense that this wasn’t a job that you had to work at.  There was no delusion of glamor, really.”

Emily: “Yes, I think a lot of times people go into the profession and think that it is about glamor.  It is about–that it’s easy, an easy job to do.  That’s it’s easy to get jobs.  I think we never thought any of those things. I think we both just fell in love with acting and performing and all of that.  So I don’t know.  I think that that really helped certainly.  And it’s nice to have family who understands what you’re going through when you’re going through it.

There’s been a much more direct focus on the Booth and Bones romance this season, what do you think of this new direction?

Emily: “I think it makes sense.  We’re in the fifth season of the show where the two characters have this chemistry together.  Yet nothing has happened and I think that it’s a great way to explore this relationship and take it to another level without actually necessarily having some physical connection, I guess, to put it that way. I think it’s clever.  I like this aspect.

It takes the relationship in a new direction and it takes it to a deeper place.  The fact that both Booth and Brennan had that–well, Brennan wrote the book while Booth was in the coma and then Booth had the coma dream that was inspired by the book.  The fact that it didn’t happen in reality almost doesn’t matter that much because it happened in their minds and they can’t get it out of their minds, especially we’ve been exploring Booth because his feelings are a little more on the surface.  I think it’s an interesting dynamic and I welcome it.  I think it’s a clever way to deepen the relationship and explore the couple in a new relationship in a way. It’s almost like a new relationship.  “

There’s always something special about the Christmas Episode and everyone comes together. How do Booth and Bones grow closer this Christmas?

Emily: “That’s a good question.  It’s so funny because we’re several episodes beyond the Christmas episode, so I have to think back.  I think that the episode brings up a lot of questions for Booth and Brennan.  Brennan opens up and has a new level of compassion that you’ll see in the episode.  I think any time characters have a breakthrough on some level, that either Booth or Brennan has some kind of break though, then that brings both of us together.

I think that brings us closer and you’ll see in the episode Brennan has a new level of compassion and starts to have a paradigm shift in how she’s looking at certain situations.  So Booth holds her hand through that.  I think when you go through something, it changes you, it’s profound in a way.  And if somebody is there helping you, that brings you closer together.  I think that’s definitely what happens in this episode.  Christmas brings people together, so as much as Brennan resists that aspect, she usually ends up together with people in the end on Christmas.”

What are some memorable Christmas traditions or events from your childhood?

Zooey: “Emily likes to sleep in on Christmas morning and I like to wake up early, so Christmas was a day of compromise. …I don’t know if there was any Christmas that comes to mind.  I know that we both love Christmas.”

Emily: “They all kind of blend together.”

Zooey: “Yes, exactly.  I think that Christmas is always used at any point in the year to cheer us up, like each other up.  We would use that to cheer each other up if we were in a sad mood or something, we’d just start talking about Christmas.”

Is Zooey’s role open-ended or strictly a one time thing?

Emily: “Don’t give anything away now.  I’m joking.”

Emily (interrupting): ” We’d love to have you back. Anytime, so I think it is open-ended.  I think it’s open-ended for a reason.  We’ll see.  It took us five seasons to figure out when Zooey could come on the show and it may take five more seasons.”

Emily: “We’re so happy it worked out.  It was something we’ve been trying to do for the beginning, but it’s scheduling.  It’s hard.”

Emily: “And in conclusion, we enjoyed working together.”

Emily: “We had fun and hope to do it again sometime, but–“

Zooey (interrupting): “But not for too long.”

Zooey: “But it was fun, it was really fun to watch Emily work and I enjoyed it and I’m excited to see the episode.”

I think we can all agree on that final sentiment. Tune in this Thursday to see the Deschanel sisters in action on an all new Bones.