‘Grey’s Anatomy’ Recap: How to Buy a Hospital

There's a storm coming on Grey's Anatomy, and that storm is named Pegasus Horizons, the EVIL medical conglomerate that wants to buy the hospital. In case you didn't realize that a metaphoric storm is coming, this entire episode is surrounded by a literal storm with constant rain and thunder. No one ever accused this show of being subtle. 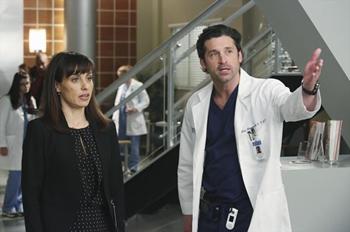 To Buy or Not to Buy

The episode opens with a fantastic verbal brawl between Callie, Arizona, Meredith, and Derek over whether or not to buy the hospital themselves (Cristina is too busy having hot, hot sex with Owen to answer her phone). Callie is the biggest proponent of buying because she witnessed the horrors of Evil Pegasus firsthand. Meredith is with her and, after some cajoling, Derek joins their side. But Arizona is opposed.

Arizona doesn't want to spend their money because it's a safety net for Sophia. Also, we learn that Lexie's share apparently went to her dad, so Meredith isn't too keen on the idea of asking him for help. Tempers hit an all-time high when Arizona delivers an epic smackdown on Derek that is so good, I'm just going to transcribe it.

Yikes. Remind me never to get into a fight with a one-legged lesbian.

Things get more complicated when Meredith finally tells Cristina the plan, assuming she'll be on board. Instead, she just laughs about how stupid it is because they know NOTHING about running a hospital. Instead, she wants everyone to support Owen because the only thing Cristina cares about is keeping everyone at the hospital, which is no easy feat since the interns are all talking about jumping ship.

When Derek arrives at the hospital to see his big, giant head plastered all over the walls, he's freaked out (and covertly hires Intern Shane to go around and deface all of the pictures). He didn't realize just how awful being the face of the hospital would be and is having major regrets. Sadly Owen thinks Derek is still on his side. But when Derek starts to see just how bad things are, he comes up with a plan.

He calls up his financial advisor who meets with all the survivors in a van, cloak and dagger style, to pitch his idea for buying the hospital through a series of financial jargon that doesn't really matter. What does matter is that they need one specific financial document and can't tell Owen about their intention or else he could get fired and go to jail.

So Meredith and Derek wander into a silly heist movie as they distract some financial guys in order to steal a copy of the document they need. I'm a bit disappointed the plan didn't involve fake mustaches.

Owen, Between a Rock and a Hard Place

Owen Hunt is definitely cracking. He's trying his best to work with Dr. Cahill to facilitate the sale to Evil Pegasus in order to keep the hospital afloat, but it means restructuring the schedule for the nurses, which he doesn't really think is a good idea, but he sees no other way and is doing his best because he puts all of the blame on himself.

Things are equally bad when Bailey asks for a genome mapping to save a kid with cancer and Owen turns it down because the hospital will never approve the cost. This leads Bailey to tell the patient's dad that his best solution is to "leave Seattle Grace" and go to a better hospital. She has a breakdown in front of Arizona where she says she's going to quit because she can't stand how awful things are with Evil Pegasus.

Why would the survivors want to own a hospital if being in charge leads to so many damn headaches? With all the stress, I'm pretty sure Owen is going to have a heart attack before the end of the season (probably one that only Cristina can fix).

With Bailey's crisis of conscience, Arizona is finally on board with the plan to buy. The only problem is that Evil Pegasus wants to close the deal that same night and there's not enough time for Derek's Big, Giant Plan to work. Luckily Cristina overheard a bit of news while she was with Owen about how losing staff members would put the deal in jeopardy.

So Derek walks into the meeting and quits. Then Meredith quits. Then Callie. Then Arizona. Then everyone looks to Cristina, and she quits too. And just like that, Evil Pegasus has been vanquished. But keeping the secret from Owen and Webber is already causing drama.

Unfortunately, this leaves Owen without any buyers or any of his top doctors. And Dr. Cahill freaks the freak out because now there's absolutely no way anyone will ever want to buy this hospital. But Owen tells her that she can do it and he believes in her.

The survivors meet to form their LLC to start the process of buying the hospital, only it needs a name. "The Bitter Pills" is Cristina's suggestion. "Epic Failure" is Arizona's. And Meredith suggests "Death Spiral" while Derek is in favor of "Blind Leading the Blind Incorporated." All good options, but part of me hopes they wind up naming their company "Grey's Anatomy."

Co-Workers Dating Is a Bad Idea

In the standard "patients mirror the doctors" case, Alex and Jo work on a newborn baby whose parents are co-workers who hooked up one time at an office party and hate each other, but they're going to raise the child together anyway. So when co-workers get involved, romantically or sexually, it causes bad things to happen, like being forced to be a part of each others' lives forever even if it doesn't work out.

Clearly, this is all about Alex and Jo, who may or may not (but definitely will) hook up because men and women can't be friends, as many, many Katherine Heigl moves have taught us. Alex opens up about how co-workers dating isn't so bad, just look at Derek and Meredith. I suppose it's for the best he didn't bring up himself and Izzie. Or George and Callie. Or Derek and Addison. Or, well, really ANY other couple at this hospital. But Jo just mocks him for being all girly.

And just when Alex gets up the courage to ask Jo for a beer, she turns him down because she has a date with an OB resident the interns call Chest Pecwell. Wow, interns have gotten dumber, because that name sucks compared to McDreamy.

April and Matthew Go on a Date

In the totally useless subplot that serves as an odd tonal distraction from all the doom and gloom, April agrees to go on her first real date with the bumbling yet adorable paramedic Matthew, because making out in the back of an ambulance doesn't count as a real date. She asks Jackson for advice on how to tell Matthew that she's a born-again virgin, trying her hardest to stay friends with her ex. Jackson proves quite helpful by telling her to be direct because if he doesn't want to be with her because of that, he's an idiot.

That night April and Matthew are making out when he stops her to say something. He's saving himself for marriage. Damn, when he stopped her I thought for a second he was going to tell her he was HIV positive, which would've been a far more interesting plot twist (though I'm not sure if people who are HIV positive are even allowed to be paramedics). Instead, she just says she's saving herself too, leaving out the whole "except for that one time, and then a whole bunch of other times with the same guy." This is not going to end well. 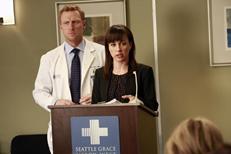 BuddyTV is your source for info on the hit series Grey's Anatomy. Check out Everything You Need To Know About Grey's Anatomy for a complete guide on the show.