A month and a half ago when I spoke to Jared Padalecki at the 100th episode party for Supernatural, his life was a lot different than it is now.  Since that night, he’s gotten married and his show was renewed for a sixth season.  But on the night I spoke to him, he was just happy to be working on Supernatural.

Well, kind of.  Proving his dedication to the series, while he was in Vancouver for the event, his bride-to-be, Genevieve Cortese, was in California enjoying a bridal shower.  Separated by a long stretch of the Western coastline, she was still first on his mind.

You can listen to the full audio of my interview with Jared for his insights on the magic of Supernatural, his relationship with Genevieve Cortese and the sacrifices of filming Supernatural in Vancouver.

Jared Padalecki on the moments that make filming Supernatural great, even if it’s 3:30am on the morning of the 100th episode party:
“We’re still working, we’re getting sprayed with water, there’s a burning truck next to us, 10 demons, stunt guys and gals, that are just working their butts off.  Somehow or another, after 15 hours through daylight, nightlight, rain, unfortunate circumstances where you’re getting sprayed in 40 degree weather, everybody’s still got a smile.”

On his relationship with former Supernatural co-star Genevieve Cortese:
“Tonight she’s at her bridal shower in Los Angeles with my mother, her mother, my sister, my sister-in-law, my nephew, her sister.  It’s tough to go, ‘Hey baby, I love you.  I wish I was there, but I’m 1,500 miles away and I’m not gonna talk to you for a few hours.  I miss you.’  Those are the sacrifices, but if I didn’t work so hard and she didn’t work so hard, we wouldn’t be in this position, we wouldn’t have met each other in the first place, so you just have to be grateful for what you’ve done and how you got there.” 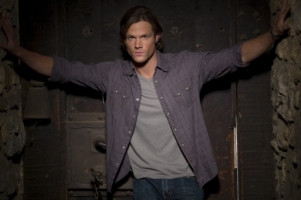