The world of Supernatural will never be the same after the shocking twist in last week’s season premiere.  We learned that an angel named Castiel pulled Dean from the fires of Hell, which immediately added an entirely new facet to the show’s mythology.  Not only do Heavenly beings exist in the Supernatural universe, but Dean is now working for one. 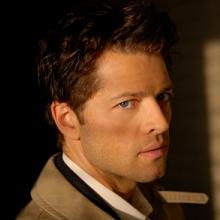 I had a chance to sit down today with actor Misha Collins, who plays Castiel on the CW series.  He talked about his role on the show, what it’s like to work with Jensen Ackles and Jared Padalecki, and what fans can expect to see in upcoming episodes.  Read on for the mp3 and complete transcript of the interview.

This is Don with BuddyTV, and today I’m talking to Misha Collins, who plays the angel Castiel on Supernatural.   I’m wondering how you got involved with Supernatural and what the audition process was like for you?

The audition process was a little bit unconventional, because the audition material that my agent sent me and what I prepared for when I went in was for a demon.  I played the demon kind of nasty, kind of snarky, a little sarcastic, and [series creator] Eric Kripke said, “Great.  That was a really good demon, but the truth is this role is for an angel.  We’re just trying to keep under wraps that we’re introducing an angel to the series, so that’s why we sent out material for a demon.”  So he gave me some adjustments, and I executed them to his satisfaction evidently, because I got the part.

Were you aware what a shake-up it would be to the show’s mythology when you signed on?

No, not at all.  I wasn’t aware at all.  I had watched the show a few times, but I wasn’t one of those people who watches the show religiously, so I didn’t know this was a major shake-up to the mythology of the show.  To be honest with you, not until there was this big fan reaction did I know.  I was still kind of unaware of the fact that it was gonna be a big shake-up.

What kind of pointers did Eric Kripke give you to play the character?  How do you go about playing an angel?

This is the adjustment he gave me in the audition: He said there’s an otherworldly quality to the character, and that he hasn’t been up close with human beings.  He’s been watching human beings from a great distance for the last two thousand years, so angels haven’t been on Earth mingling with human beings for the last two thousand years.  So when I’m interacting with human beings, there’s a naive curiosity about their behavior.  It’s as if I’m inspecting some sort of alien beings.  That was the main direction that he gave me, and then [director] Kim Manners gave me another piece of direction, which is that he wanted to see piousness coming out in Castiel.  That’s pretty much what I’m working with in terms of the direction that I’ve gotten from the powers that be on Supernatural.

I’ve been reading Revelations as well, and there’s a lot of talk about angels in a very vengeful, dark, Biblical way in Revelations.  That has been educational as well, because in Revelations angels are not fluffy, soft, cuddly, little halo-wearing individuals.  They are warriors of God.

Is that the kind of angle Supernatural is going for, based on the book of Revelations?

No, but I think that it informs them.  There’s another angel that’s going to be introduced called Uriel, played by Robert Wisdom, and Uriel is — I’m more of the conflicted angel, I have more pity for humanity than Uriel does.  Uriel has more of that smite and destroy, Revelations, Biblical angel vibe going on.  I think those will play off each other well.

I know you’ve guest-starred on other TV shows like Without a Trace and CSI.  What’s the experience like on Supernatural?  How’s it different for you?

When you join some sets you feel like you’re an outsider.  Like you’re plugging into a big machine, and you just serve your part and get spit back out again.  It’s kind of cold and alienating and a little impersonal.  Supernatural hasn’t been that way, it’s been a very warm and welcoming community.  Cast and crew have been really welcoming and open, and that’s been really helpful.  It’s helpful because it’s hard to act when you feel like you’re stepping on someone’s toes.  In Supernatural they don’t make you feel that way, so it’s a great environment to work in.

A lot of times I think the cast members, the lead characters in a show really set the tone for the show.  On some shows, the stars of the show will just be whining and complaining and spending the whole time texting their boyfriends on their Blackberries, and there’s just no attention given to the work.  Jared and Jensen are very serious about the work, and at the same time they are light and upbeat and sarcastic.  They’ve got good senses of humor, and that actually really helps.

So far we’ve seen you mostly interact with Jensen’s character.  Do you get a chance to interact with Sam and everyone else in the future?

Well, I interacted very briefly with Bobby, just long enough to knock him out.  I will interact with Sam later on, and with the angel Uriel, and presumably with additional cast members in the future, but so far those are the ones that I’ve interacted with.  It seems to me that the main focus is my relationship with Dean.

Are you going to be in most of the episodes this season?

I have shot four of the seven so far, and I don’t know what the future holds.

You’ve also done a lot of work in film.  Do you prefer TV over film, or do you like switching back and forth between both of them?

I like doing both.  There’s something great about working on a role like Castiel on Supernatural, where you get to spend a lot of time with the character, stretch it out over months and months and really settle into it and get to know it well.  That’s great, and also television moves quickly, so you actually can sink your teeth into a lot of material, and it’s kind of satisfying.  The same thing is true about independent movies.  They’re on low budgets, so you’ve got to cover a lot of bases really quickly.  For that reason I like working on independent movies, and I like having an arc on a TV series as well.

Can you give us any hints about what’s coming up with Castiel?

I can tell you that Castiel has arrived because the armies of Hell are in danger of rising up if these seals are broken.  The apocalypse may be at hand, and that’s why for the first time in two thousand years angels are walking amongst mankind and fighting shoulder to shoulder with the likes of Sam and Dean.

I know you also have a role on Nip/Tuck coming up.  Can you talk at all about that?

I’m sure I can, but I don’t want to spoil it.  It’s too funny.  I can say that it’s not terribly PG.  I’m probably not going to tell my grandmother to watch the Nip/Tuck episode.

I don’t think anything on Nip/Tuck is PG.

Right.  As a general rule you should probably never tell your grandmother to watch Nip/Tuck.

– Interview conducted by Don Williams
(Image courtesy of the CW)