“Moon Girl and Devil Dinosaur” is coming to the Disney Channel and is an animated series adaptation of the Marvel comic created by Brandon Montclare and Amy Reeder and beautifully drawn by Natacha Bustos. The show’s executive producer, Laurence Fishburne (Morpheus from “The Matrix”), was a fan of the comic’s predecessor, “Moon Boy and Devil Dinosaur.”

After being introduced to the comic by a Marvel executive, Fishburne decided to make a show based on the African-American female superhero and her ferocious dinosaur partner. In 2018, the news came that Marvel and Cinema Gypsy Productions were working on a “Moon Girl and Devil Dinosaur” show that was to be released on the Disney Channel. In 2019, Marvel Entertainment announced the show to fans at D23 (Disney’s largest fan-ceremony).

If you’re not familiar with the scrappy kid super-genius and her giant red BFF, we’ll tell you everything you need to know about the Marvel team-up.

When Will Marvel’s “Moon Girl and Devil Dinosaur” TV Show Be Released?

What Is Marvel’s “Moon Girl and Devil Dinosaur” About?

The Marvel animation, “Moon Girl and Devil Dinosaur,” is adapted from the comic book of the same name that debuted in 2015. The graphic novels follow the story of 9-year-old Lunella Lafayette. Her classmates teasingly call her Moon Girl because of her intellect.

Lunella feels misunderstood and alone when a portal from another dimension opens up, releasing several Killer Folk (an evil tribe from the Moon Boy comic series) and a giant, red dinosaur into New York City. The dinosaur forms an instant bond with Lunella. They soon team up to fight the Killer Folk and become the heroes Moon Girl and Devil Dinosaur.

The comic features several cameos by other Marvel characters, like Amadeus Cho (the Hulk), Doctor Strange, members of the Fantastic Four, the X-Men, and Captain Marvel. It hasn’t been confirmed yet which, if any, other Marvel heroes will be featured in the show, though.

Where Does “Moon Girl and Devil Dinosaur” Take Place?

There’s more than one Marvel Universe. The Marvel Multiverse is made up of several different universes. For example, the events in films like “Spider-Man: Homecoming” and “Avengers: Endgame” take place in the Marvel Cinematic Universe (MCU) on Earth-199999. The “Moon Girl and Devil Dinosaur” comics take place primarily in New York City on Earth-616 (the main Marvel comics universe).

However, Devil Dinosaur is actually from a separate universe. Earth-78411, also known as Dinosaur World, is the setting of the “Moon Boy and Devil Dinosaur” comics that debuted in 1978. During an altercation over the Nightstone, Moon Boy accidentally opens up a portal to present-day Earth-616, which allows the events of Moon Girl and Devil Dinosaur to unfold.

Although Earth-616 is considered the main canon universe for the Marvel comics, there’s a horde of universes represented in various comics, TV shows, and movies. It’s currently unknown whether the Disney show will take place in one of Marvel’s existing universes or if it will create its own.

Who Are the Heroes of Marvel’s “Moon Girl and Devil Dinosaur”?

Lunella Lafayette, Moon Girl, is a brilliant and ambitious young girl who is too smart to get along with other kids her age. In fact, she’s described as the smartest girl in the world. She dreams of becoming an inventor and creates her own weapons using things like soda cans. As Moon Girl, Lunella builds her own outfit, complete with a utility belt, retractable roller skates, and weapons like an extendable boxing glove.

See also The Cast and Characters of Marvel’s “M.O.D.O.K.”

It’s unclear exactly how faithful the TV version of Moon Girl will be to the comics. However, we do know it will feature an older version of the character.  In the show, Lunella Lafayette, who is 9 in the comics, will be portrayed as a 13-year-old girl. Lafayette is voiced by Diamond White, who’s already done some voice work for Disney on shows like “Phineas and Ferb.” She’s also featured in “The Bold and the Beautiful” soap opera. 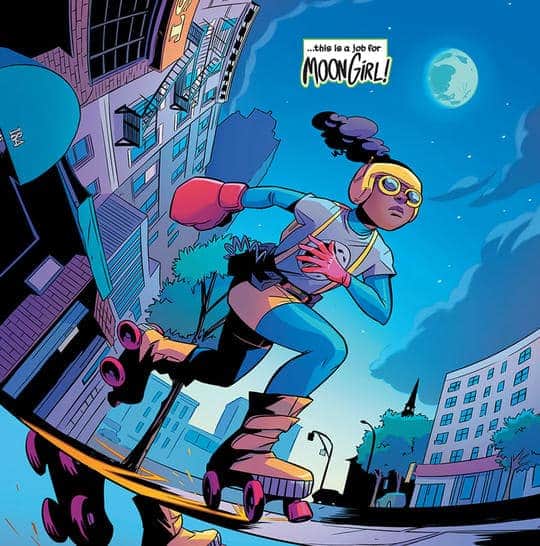 Devil Dinosaur is a T-rex from a prehistoric version of Earth called Dinosaur World. He gets his name from his red skin, resulting from burns he suffered as an infant when the Killer Folk lit his whole family on fire. The baby dinosaur was saved by Moon Boy. While the fire claimed the lives of his mother and siblings, it unlocked Devil Dinosaur’s mutant gene, giving him superpowers.

He fought the Killer Folk alongside Moon Boy until a portal sent him to present-day New York City, where he meets Lunella. He’s extremely fond and protective of his best friend, at times even trying to lick her affectionately like a dog. Once again, it’s unknown how much the TV version of Devil Dinosaur will have in common with the comic one. The character will be voiced by Fred Tatasciore, who has voiced the Hulk in several Marvel shows. He’s also done extensive vocal work in video games like Mass Effect and Gears of War. 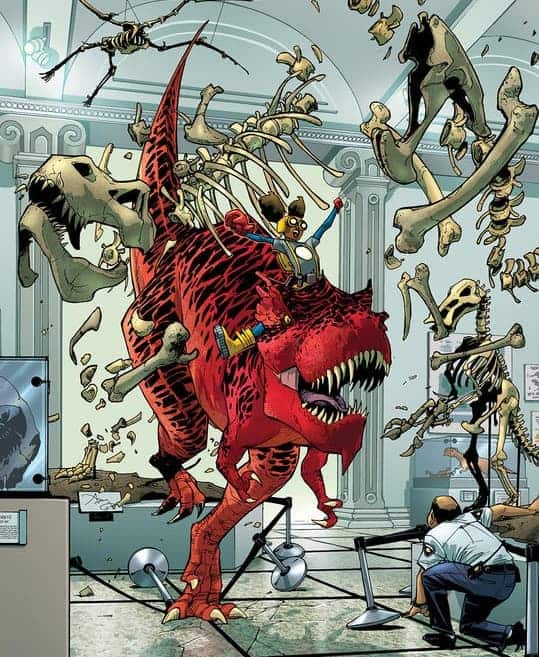 Who Are the Villains of Marvel’s “Moon Girl and Devil Dinosaur”?

In the comics, the team takes on plenty of enemies, like the Killer Folk, Kid Kree, Mole Man, and even Doctor Doom — although there’s been no word as to which of these will be featured in the show.

However, it has been announced that the supervillain, The Beyonder (voiced by Laurence Fishburne), will have a recurring presence on the show. The character is an all-powerful being who can travel from dimension to dimension effortlessly. He’s one of the strongest characters in Marvel comics, even more powerful than villains like Thanos and Galactus. He’s even capable of destroying entire galaxies, which he does on occasion.

Given that Fishburne previously described the mood of the Disney television animation as “lighthearted,” it’s likely that The Beyonder’s abilities will be toned down for the Disney Channel. It’s almost certain that he won’t be destroying the galaxy, at least.

Where Can You Watch Marvel’s “Moon Girl and Devil Dinosaur”?

You’ll be able to catch Marvel’s “Moon Girl and Devil Dinosaur” on the Disney Channel. So far, it hasn’t been confirmed whether the show will also be available to stream on Disney Plus or Disney Now.

If you’re a Marvel fanatic, you’ll be ecstatic to know that Disney has a slew of exciting Marvel shows in various stages of development, like “Hawkeye,” “Ms. Marvel,” “She-Hulk,” and “The Guardians of the Galaxy Holiday Special.” Check out BuddyTV for the most up-to-date news about the new series, “Moon Girl and Devil Dinosaur,” and all the other great Marvel movies and shows in production.