Dancing with the Stars’ Recap: Halloween Night for the Top 7

Get ready for some tricks and treats because it’s Halloween Night on Dancing with the Stars. The seven remaining couples will all perform spooky-themed routines, with the highest score receiving immunity. The other six will then compete in a trio of Dance-Offs for bonus points before one couple is eliminated. 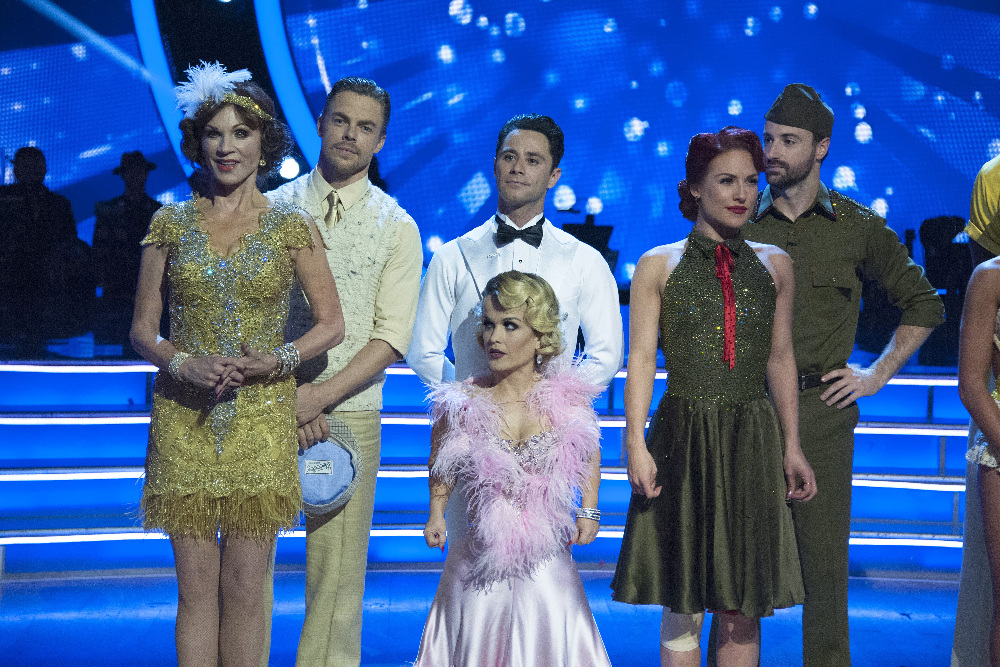 Which couple will be eliminated and which Halloween routine will win immunity? Let’s find out.

Their routine is inspired by Beetlejuice. The style is difficult for her because it requires straight legs. It’s a cool concept using the “Day-O” scene, but they seem to be doing two different things for part of it. If Len Goodman were here, he’d complain about the slow start that didn’t have much dancing. Julianne Hough loved the tone but needs more content. The judges all agree that it was good, but not great.

It’s safe to assume they won’t be getting immunity.

Their dance is inspired by Willy Wonka, so apparently, this is actually Tim Burton Night. She cleared her schedule this week to focus purely on dancing. She’s playing Charlie to Val’s Wonka in a candy dream. Val gets REALLY emotional in rehearsals. The dance is incredibly beautiful and magical, capturing the “Pure Imagination” of Willy Wonka. This is a giant leap forward for them that they really needed. It feels a little light on the Viennese Waltz content, but I suppose that’s what happens when Len is gone. The judges are brought to tears by how special and emotional it was.

Well, that kind of ruins the tension of who will get immunity. If there’s a tie, immunity goes to the couple with the highest total score for the season, so James is the only person who could steal immunity from Laurie if he’s also perfect.

They’re going for a spider theme. She’s definitely lacking in confidence, especially since she fell during last week’s team routine. There are ropes to simulate spider webs and, as always, Derek’s choreography is top-notch. However, it’s very reliant on lifts and there’s a big flaw at the end when they go for a lift and she bumps her elbow on his head. Carrie Ann Inaba mentions a lot of other stumbles and problems throughout where she was getting in her head. Yeah, it was a great idea but poorly executed.

Those 8s are generous. Derek hasn’t finished worse than fourth place since season 8, but this could break that streak.

They are playing skeletons. These two are really fun together and his 2-year-old son shows up in rehearsals. OK, I officially want him in the Top 3 with James and Laurie. Beyond the fact that he’s extremely entertaining to watch, this routine is jam-packed with content and he’s turned into quite a good dancer. His sister can eat crow. The judges really appreciate the marriage of content and concept.

Wow, ANOTHER perfect score! Good for them.

Their routine is inspired by Maleficent because this season doesn’t have a Disney Night. Cheryl decides to really push Ryan hard in rehearsals this week, saying he needs to step it up two notches. It’s a very cool, rocking Tango with a hard edge that I love. Ryan could be a little more intense and he does tend to hunch over and misses the form. At least the performance was good, even if it was “squatty.”

Wow, there’s gonna be a BIG divide between the top and the bottom.

They have Little Shop of Horrors, which I adore. Gleb is strictly ballroom and he’s never choreographed Jazz before. Holy crap, this routine has SO MUCH CONTENT. It’s nonstop dancing and it’s outstanding, with lots of impressive splits. It’s a really entertaining and Broadway-esque dance. Carrie Ann liked that they added a little Jazz, but Julianne didn’t because it’s not her best style.

See also 'Dancing with the Stars' Spoilers: What Are the Stars' Guilty Pleasures?

They are straight out of Suicide Squad, with him as the Joker and her as Harley Quinn. However, a knee injury has sidelined Sharna this week, so James must adapt to a new partner. In fact, she may be out for the rest of the season due to the injury she had during rehearsal last week in the team dance. So at least James rehearsed with Jenna all week and Sharna will be there with him. James is wonderfully creepy and, as always, a brilliant dancer. It’s another fantastic routine, even without Sharna. The way he moves is so effortless and the judges find it even more astonishing how well he does, even with a new partner. Carrie Ann says James reminds her of Mark Ballas.

A third perfect score for the night!

Sorry Laurie and Calvin, but James has a higher total score for the season. And James gets 5 extra points while everyone else goes for 3 more points.

The couples will pair off in Jive, Salsa, or Cha-Cha-Cha. Everyone is going for fairness, competing against the person they’re most similar to, And there’s a giant sign on the wall that shows the real-time voting results from America as a big graph. If there’s a tie, America’s vote is the tie-breaker.

Laurie and Val vs. Calvin and Lindsay: Jive

They’re both very good. It’s a lot of high energy, with Laurie as the technical master and Calvin with his beaming smile. The judges all respect that no one went for an easy win.

Jana and Gleb vs. Terra and Sasha: Salsa

Jana and Gleb go for sexy with clean moves, awesome lifts and Gleb takes his shirt off at the end. Terra and Sasha are more fun, but he just jumps and spins her around a lot. When the judges comment, Sasha takes his shirt off two. I’m very distracted right now by shirtless Gleb and Sasha.

Marilu and Derek vs. Ryan and Cheryl: Cha-Cha-Cha

These are definitely the two worst dancers left in the competition, so it’s not that great. I might give the edge to Ryan as he seems a little better than Marilu. The judges couldn’t take their eyes off of one couple.

So it’s down to Ryan or Terra.

Whew, I was right again. And that kind of sucks for Marilu, losing those 3 extra points to someone who can’t even use them. He did much better than I expected and he succeeded in rehabilitating his image to an extent, so mission accomplished.