I love the fun and silly episodes of Supernatural, and that certainly describes “Scoobynatural.” The animated episode let the show be as zany as it wanted, with an entertaining mystery, a few references to the ongoing plot and a lot of great quotes.

Dean’s obsession with Scooby Doo led to plenty of wonderful moments, from his failed attempts to hook up with Daphne to his very lopsided feud with Fred. The oddball pairing of Castiel with Scooby and Shaggy also worked, as did Velma’s obsession with Sam’s broad shoulders. Between her and Becky, it’s clear that nerdy girls prefer Sam to Dean.

The episode also contained the right amount of heart, with Dean desperate to protect the childlike innocence of the Scooby Gang. Daphne should be sweet and naÃ¯ve, not freaking out over whether she’s going to Hell and eagerly eyeing a shotgun.

Here’s a look at some of the best and funniest quotes from this episode of Supernatural.

“You boys just took down an evil plushie that was trying to kill me, we’re all good.”
-Alan the pawn shop owner to Sam and Dean 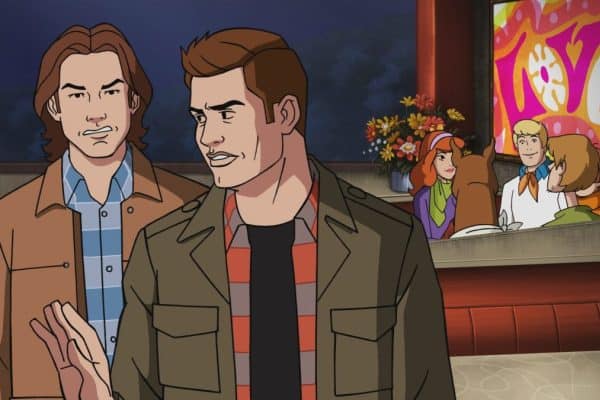 “Growing up on the road, no matter where dad dragged us, no matter what we did, there was always a TV. And you know what was always on that TV? Scooby and the Gang. These guys, they’re our freaking role models, man. Except Fred, he’s a wad.”
-Dean to Sam

Dean: “We do the same thing. We go to spooky places, we solve mysteries, we fight ghosts.”
Sam: “Except our ghosts don’t wear masks. And we don’t have a talking dog.”
Dean: “I don’t know. I mean, Cas is kind of like a talking dog.”

“We’re not gonna tell them about anything. Not where we’re from, not about monsters, nothing, capiche? They are pure and innocent and good, and we’re gonna keep it that way.”
-Dean to Sam about the Scooby Gang 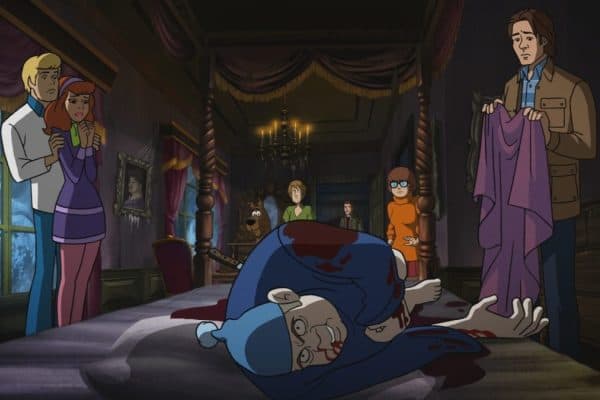 “It doesn’t matter if we die. Scooby Doo could die. And that’s not happening, not on my watch. I’d take a bullet for that dog.”
-Dean to Sam

“I’m back from Syria with fruit from the Tree of Life. The Tree was guarded by a pack of djinn. I killed most of them, bargained with the rest. I think I’m technically married to their queen now.”
-Cas

“I once led armies and now I’m paired with a scruffy Philistine and a talking dog.”
-Cas about working with Shaggy and Scooby 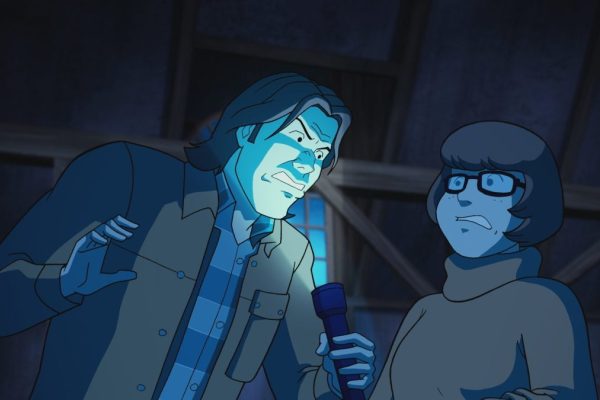 “I wouldn’t expect such a big, broad-shouldered fellow like you to be as chicken as Shaggy.”
-Velma to Sam

Velma: “I guess this is your first mystery. So if you could keep those giant, linebacker shoulders from knocking over any clues, that would be great.”
Sam: “Why do you keep talking about my shoulders?”

“The Scooby Gang does not have nervous breakdowns. Now you may not have tangled with the supernatural, but you’ve fought monsters, real freaking psychos. … You guys have all jumped into danger with no thought for yourselves. You’re heroes.”
-Dean to the Scooby Gang

“Yeah, creepy ghost kid. You get used to them.”
-Dean to Cas

“So I was right. I told you, you big lug. There’s no such thing as the supernatural.”
-Velma to Sam

“I should’ve known Velma was good to go. It’s always the quiet ones.”
-Dean to Sam

“I would’ve gotten away with it if it wasn’t for those meddling kids.”
-Jay as he’s taken away by the police

What was your favorite line from this episode? Supernatural airs Thursdays at 8/7c on the CW. For more updates, like BuddyTV’s Supernatural Facebook page.

(Imagse courtesy of the CW)