Battlestar Galactica ended last Friday, concluding its four year run on the Sci Fi Channel. The characters may be hard to come by until the TV movie The Plan, but the show’s stars have been keeping busy elsewhere.  Tahmoh Penikett is on Dollhouse, Katee Sackhoff had a recurring role on Nip/Tuck, Mary McDonnell showed up on Grey’s Anatomy and Tricia Helfer visited USA’s Burn Notice.

Those last two have even more TV gigs lined up for the future.  McDonnell will make an extended run on The Closer and Helfer will guest star on this week’s Chuck

Entertainment Weekly spoiler guru Michael Ausiello reports that McDonnel, who played Laura Roslin, will debut early in The Closer’s fifth season. She will play Captain Christina Hatcher, head of the Force Investigation Division. Apparently she and Kyra Sedwick’s Brenda Johnson will be put into conflict in a battle of two of television’s strongest, smartest women. The Closer’s executive producer James Duff reports that he created the role specifically for McDonnell.

Tricia Helfer, who played Number Six, will appear in the March 30 episode of Chuck entitled “Chuck Versus Broken Heart.” She plays Alex Forrest, a sexy but cruel agent brought in to evaluate Sarah’s job performance as Chuck‘s handler. She reaches an early verdict and Chuck’s workplace romance comes to an abrupt end. Chuck still hasn’t been renewed and it’s getting late in the game for that, putting the series on the chopping block for ending abruptly itself.

While there’s no substitute for seeing  much loved characters continue their narrative arcs, Battlestar fans may no doubt enjoy the contact with McDonnell and Helfer, if only to help with the withdrawal. Has Battlestar really been off a week already? How many days remain until The Plan?

Check out the preview for Chuck and vote in our poll. 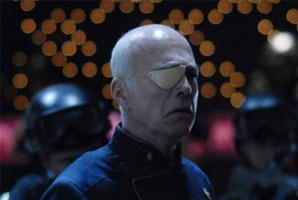