This week, in another example of American Idol refusing to just be an hour long, the Top 5 sang two songs each: one from the past, and one current song. If this episode was any indication, songwriting just isn’t what it used to be. Or maybe it’s that everyone seemed to be running out of gas this week. Nothing will fix that like an elimination! I hope Jimmy Iovine gives out his opinions again this week, as that was my favorite element last week and we need more than just Jennifer Lopez performing to make the hour tolerable.

Apparently, last week’s “bottom three” were not necessarily the bottom three, they were just the one person who was eliminated (Casey) and two other people who were safe. I guess that makes sense that they wouldn’t tell us who is actually in the bottom three at this point. Ryan just likes to give everyone a good scare. Still, I wonder if seeing Scotty there affected the voting?

Ryan “most important night ever” Seacrest tells us 60 million votes came in. His guilt trips are starting to pay off. Steven Tyler wrote a book, and Ryan only pretends to care about it before moving on to Jennifer Lopez. He promises a “sneak peek” at the video for “I’m Into You,” even though the video has already been released. Onto the group performance!

Oh, it’s delightfully bad — a lilting performance of “So Happy Together.” Someone teach these kids to blend (or maybe that’s a sound editing problem). The higher harmonies are much louder than the melody, and the performance sounds oddly grim as a result. Are we in a Steven Tyler nightmarescape? We must be, Ryan just confirmed an eleventh season of American Idol. 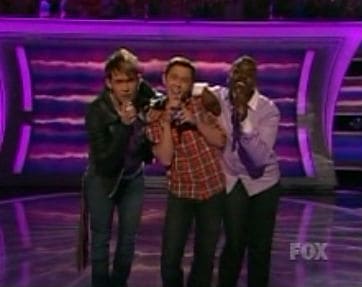 Did you know that all the contestants have special talents/powers except for Haley, who can’t even parallel park on her own? A tip of the hat to the Ford Music Video for showing us Scotty tricking on a BMX bike.

Oh my god, this cross-show promotion has to stop. The Top 5 had to cook for an unusually cheery Gordon Ramsay. There are no stakes here, so everyone is having a good time. In case you wanted to know, Lauren Alaina had the best food. To my delight, Scotty’s dish made Gordon Ramsay half-puke. What can I say, I love Scotty in everything. 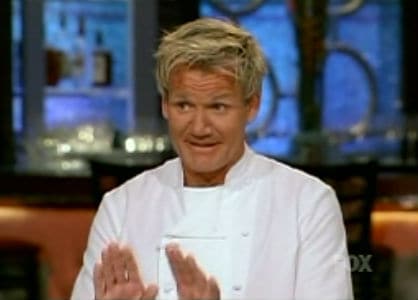 Lady Antebellum performed and they were good. I think Lauren could sing any of their songs really well, just maybe not with Scotty.

Oh no, a Bing commercial. At least it made fun of Jacob’s bad outfit last week. Even Scotty McCreery couldn’t save this one. 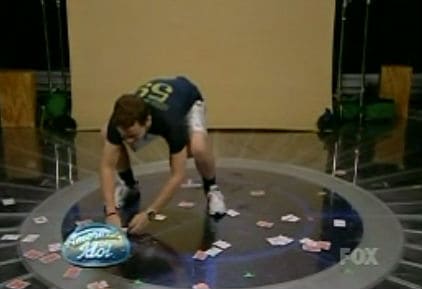 “You might be surprised,” Tired Ryan tells us before delivering some results. MIGHT BE! Does that mean Jacob isn’t going home? Enough of this, let’s hear from that little ball of sunshine known as Jimmy Iovine. Jimmy thinks that James needs to control his emotion more, and while James is usually at a 9 or 10, this week was an 8. Ryan sends James to a “group” on the left side of the stage.

A confused-looking Lauren receives Jimmy’s feedback next. Jimmy thought Lauren let her fear get the best of her and she will be in the bottom two as a result. Lauren is moved to the right side of the stage.

Just when we’d forgotten (blocked out?) that Gordon Ramsay told us the competition wasn’t over, we have to watch the conclusion of this FOX mash-up. Lauren and Jacob go head to head in a taste test. Jacob thinks his being fat will come in handy but he has underestimated Lauren Alaina’s knowledge of hotdogs. It could not end soon enough. 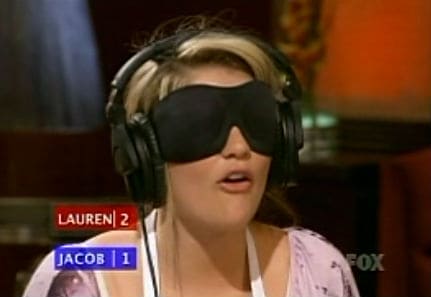 J. Lo! Ryan Seacrest is a very disrespectful audience member. Throwing popcorn and feeding Steven Tyler while poor Randy’s trying to talk. Anyway, Jennifer Lopez STOMPED THE YARD (confession: I don’t actually know what that means). She did release some dancers from glass cases by KICKING the glass, though. She defies the laws of physics in every way. Hats off to you, Jennifer Lopez. Thank you for releasing those dancers before they ran out of air or whatever. 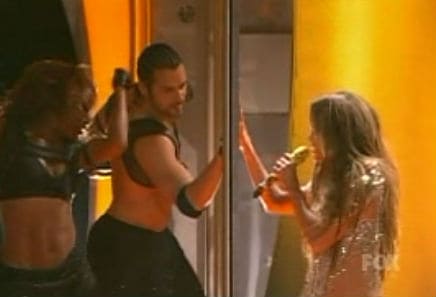 Alright, time for more results. Jacob is up next, and his placement will make James or Lauren feel much, much worse. Jimmy gave Jacob a 6. Jacob joins Lauren on the right side of the stage, and James is probably feeling pretty good not standing next to them right now.

Haley is next to be grouped, and Jimmy Iovine makes it a little more about himself. He never backs down. Jimmy gave Haley a 10, and Haley joins James to the left.

Scotty is last, and while Jimmy loved “Gone,” he wasn’t too keen on “Always On My Mind.” Regardless, Jimmy is sold on Scotty as a product. Ryan stresses again that the results were in RANDOM ORDER last week, and Scotty has never really been in the bottom two. Interesting! Scotty is safe, but then Ryan makes Scotty stand with the group he thinks is safe tonight. It’s the most evil thing Ryan has ever done on this show. He leads Scotty over to James and Haley, who are safe (of course).

So it’s down to Lauren and Jacob, naturally. Jimmy Iovine is patting himself on the back right now, or having Sheryl Crow do it for him. Lauren is more emotional than ever, as it is her first time in the bottom. Sure enough, Jacob is going home and Lauren is safe. Why did Ryan think we’d be surprised? 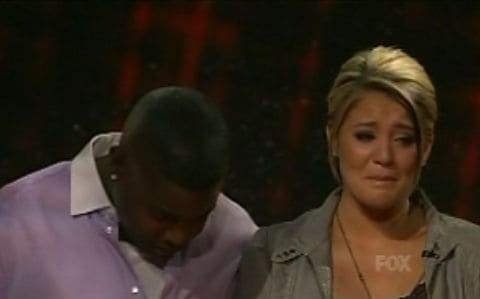 Even though he is free from American Idol‘s clutches now, I don’t think it’s the end for Jacob. He’s just too funny and delightful and talented. He could be Season 10’s Jennifer Hudson! I’m SO glad he sang “House is Not a Home” for his final song. It was my final wish for him. Everyone looks at peace with the entire situation except for Lauren, who is wrecked as usual. She didn’t see this coming? Or maybe she’s still upset about being in the bottom.

Are you surprised by Jacob’s elimination? I didn’t think so.