Why This ‘Mr. Robot’ Fan Theory is a Terrible Idea

One of the most delightful things about Mr. Robot is also the thing that makes it incredibly frustrating. Nothing that happens on Mr. Robot can be taken at face value. Since the main character of Elliot is such an unreliable (read: mentally ill) narrator, the audience can never be sure what they are watching is actually happening. The puzzle of a drama series challenges the viewer to figure out the reality of every scene. Mr. Robot keeps you on your seat to determine what is a part of Elliot’s mind and what is actually occurring.

It is this mend-bending element that led to the first season’s central mystery: is Mr. Robot real? While it was eventually revealed that Mr. Robot is just a combination of Elliot’s imagination and Elliot himself, each episode offered more clues that refuted or gave evidence for the theory. It’s no surprise that season 2 has sparked a similar theory about Elliot’s perception of the world. Hopefully this one will not turn out to be eventually true.

For those unaware, a theory created by this Redditor has gained some traction since the airing of the season 2 premiere. The basic gist is that everything we see Elliot do in season 2 isn’t really happening or is isn’t happening exactly as is it presented. Rather than Elliot’s strict routine being self-enforced it is happening because Elliot is actually in a mental hospital.

Elliot isn’t actually living with his mother. Elliot’s “mother” is really a nurse at said mental hospital. It’s not just Elliot’s mother who is actually someone different. The theory states that everyone Elliot has introduced us to in season 2 is either a patient or employee of this hospital. This includes characters like Ray and Seinfeld-obsessed Leon. 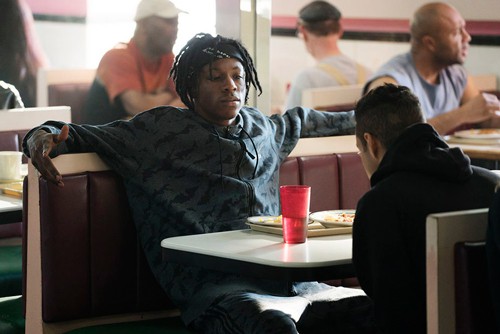 There are some wilder variations on the theory. Some people think that Elliot is actually dying from an unknown event in the season 1 finale and the entire season so far is a product of Elliot’s imagination as he slowly dies. We are just going to stick to the original theory because it is the most plausible. As mentioned, hopefully it turns out to be just as far-fetched as the other variations.

The theory does explain some things about Mr. Robot season 2, things that can appear as plot holes. It doesn’t make a terrible amount of sense that severely anti-social Elliot would have made friends with someone like Leon in between seasons 1 and 2. If Leon is a fellow patient that explains Elliot’s friendship and regimented meal times with Leon. It also explains why Elliot decided to live with his mother when he was so vehemently opposed to the very idea of her in season 1. If Elliot’s mother is just a nurse, then that is no longer an issue.

If Elliot is in a mental hospital it also makes sense of the stilted meeting that Elliot had with Gideon in the season premiere. Gideon was waiting very primly for Elliot in the kitchen of Elliot’s mother’s house. The whole ordeal felt very formal for such a relaxed setting but Gideon’s posture makes sense if Gideon is actually visiting Elliot at a mental hospital. Elliot’s adventures being in a mental hospital also explains why Ray, who presumably actually works at the hospital, knows so much about Elliot and can always find him. Though Ray has only existed in 3 episodes, Mr. Robot has been strangely coy with revealing his real occupation but very open with other things in his life. 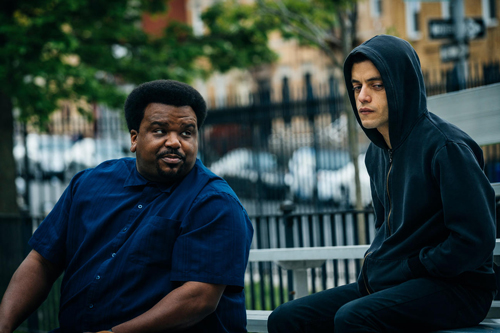 Perhaps the most important thing about the “Elliot Being Instituted” theory is that it explains Darlene’s absence. Elliot has told us that Darlene has visited him (sometimes) and Darlene has been seen telling people she will talk to Elliot. We haven’t see any of these meetings on-screen. We know from season 1 that Darlene can bring Elliot out of his mental fugue states on occasion. Perhaps when Darlene is around Elliot, his delusion that he is living in his mother’s house drops and he is aware he is in mental hospital. Mr. Robot doesn’t want to reveal that yet so hence the separation between brother and sister.

The mental hospital theory explains a lot but there are also more mundane possible explanations. Maybe Darlene is keeping her distance from Elliot because he is actually living with their mother and Darlene has an even more contentious relationship with the woman. Ray could just be a stalker. Gideon could have seemed so formal because that was his character. Elliot is anti-social but it’s not that much of a stretch to think he met Leon in between seasons. Elliot can meet people if there is a goal.

Furthermore, Leon might be more talkative than Elliot but there is no indication he’s actually a “normal person.” Leon doesn’t seem interested in Elliot as a person, just as someone he can talk to about his obsessions. It’s not really a “friendship” and it doesn’t need to exist just inside a mental hospital to be real.

Just because Mr. Robot plays with reality frequently doesn’t mean that everything is an illusion. The tagline of the season “control is an illusion” does suggest something mysterious about the season. The tagline could refer to something as relatively simple as Elliot’s struggle to maintain or defeat Mr. Robot. It doesn’t have to refer to the fact that Elliot’s regimented routine is actually prescribed by a mental hospital.

More than that, though, the mental hospital theory creates a dangerous precedent for Mr. Robot. If the case becomes that season 1 was about the identity of Mr. Robot and season 2 is about Elliot trapped in his own mind, it requires that season 3 also have some big mental mystery.

It turns Mr. Robot into something less natural. The show isn’t weird anymore because the main character has an illness. The show is weird because of a desire to shock the audience, not tell a sensible and logical story. If the mental hospital theory turns out to be true, then Mr. Robot will be in this constant cycle of trying to one-up itself with each season. The show won’t become a trippy but respectful drama, it will just be a soap opera with twists for the sake of them.

But what do you think? Do you support the theory? Do you think Elliot is a mental hospital? What do you make of Leon, Ray and all the new characters? Why do you think season 2 hasn’t had Darlene and Elliot interact?

‘Mr. Robot’ Season 2 Finale Recap: Elliot Finds Answers But Not the Ones He Wants

‘Mr. Robot’ Recap: If You Want to Live, Never Laugh at Darlene

‘Mr. Robot’ Recap: The Secret Between Elliot’s Routine is Revealed

‘Mr. Robot’ Recap: Elliot Slips Into Delusion and … Hey, Is That ALF?