‘Twilight’ Review: The Apple of My Eye

7pm, Tuesday, press screening – the theater is half full of press people 30+ years of age who, I’m sure, have been forced to be there while the other half is comprised of giddy Twilight fanatics who won tickets from a local radio station to attend the early screening . They bubble with energy and anticipation. Then there’s me: a 22 year-old Twilight fan who volunteered for the opportunity to review the movie. I sit, taking in the scene. Only 4 people have dressed up, to the great disappointment of the radio DJ’s who brought prizes for a costume competition they anticipated would, without a doubt, happen. Spotting the movie reviewers is easy. They sit uncomfortably still, moving only to check their watches every 4 minutes or so. I lean to my right to tell my coworker to beware of the many “woo girls” surrounding us. He groans in acknowledgement. The lights dim and screeches of joy erupt from the theater. In fact, throughout the whole movie, the excited fans clapped, squealed, gasped and giggled from the moment Jacob met Bella, through Edward’s gloriously beautiful entrance into the cafeteria, to the very last moment. 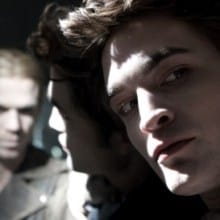 Midnight, Thursday – me and my five best girlfriends purchased our tickets five days before and waited in line for hours next to many eager, but tired high schoolers. When we finally got our seats, I sat back and listened to the chatter around me. One high school girl was explaining to her presumed love interest the plot of Twilight as he asked questions like, “now who’s Jacob again?” to show he was listening. The girls behind us talked for quite some time about how they donned backpacks and pretended to be students at the school where Twilight was filmed. Across the aisle, girls compared their Team Edward screen-printed shirts to the homemade “Bite me” shirts of the girls sitting next to them. The fandom level was high and I could see that this would be a much more intense screening than my first. The lights dim and I wait for the squeals and cheers, but they don’t come. Instead, a flow of nervous but excited whispers trickles across the auditorium. What happened to the giddy anticipation I had seen only two days earlier?

I suddenly realized the worries that were plaguing my auditorium. The girls sitting around me on Tuesday night had a unique opportunity in being able to formulate an untainted opinion of the film. As soon as that first screening ended, a flood of reviews came out from fans and critics alike, and they weren’t all good. In fact, most pointed out the flaws of the movie, the actors, and even the books. For the many Twilight fans that have placed their hearts and souls into the books and the characters, this movie had to be good. If the movie was horrible, it would ruin the perfectly formed vision of Stephenie Meyer’s Forks, Washington that they have all created in their heads. The world and story they had fallen in love with would somehow be less; it would somehow be changed. The fear that took over my midnight showing pushed the audience to silence.

Like any movie adaptation of a book, it can never be perfect. The closest example to date would be The Lord of the Rings trilogy or Harry Potter and the Prisoner of Azkaban (specifically because it does what most book adaptations don’t, which is turn the book into a movie format, but that’s a whole other argument). Twilight the movie can never be Twilight the book. But, the important parts will remain the same. Bella Swan still moves from Phoenix to small town Forks, Washington and falls in love with a vampire named Edward Cullen. What’s important, even for a Twilight fan like myself, is that you separate the book from the movie as much as you can.

As a movie, Twilight would have never been a studio feature. The characters are too awkward, the emotions are too real and the climax isn’t ball busting. Twilight: the movie couldn’t even be an indie feature. It’s not funny enough to be a breakout classic like Juno and not daring enough to become a haunting tale like Requiem for a Dream or Trainspotting. So, if Twilight doesn’t look like a mainstream movie and it doesn’t seem like an indie movie, what’s wrong with it?

I won’t argue that the movie is perfect. For instance, I was not a big fan of the flashbacks that occurred any time someone told a story. They looked cheap and out of place and I’m sure they made everyone in the theater giggle. The main issue many people will encounter is that without reading the books beforehand, the long stares seem like prolonged silences (which is not a common feature in the film industry) and the awkward moments between Edward and Bella can be quite disconcerting. It’s not something we’re used to seeing or feeling in our movie going experiences but it is definitely not a bad thing. Twilight challenges users to think about what’s going on underneath the surface. Like in life, people don’t often say what they’re thinking and many, if not most, of our initial romantic relations are silent and awkward.

The bold choice that Catherine Hardwicke and screenwriter Melissa Rosenburg made was to be honest. Although Edward may be a vampire and the cast members are way more attractive than average human beings, there’s a truth to their version of first loves. Moreover, they stayed true to Stephenie Meyer’s version. The script isn’t sped up or given a Diablo Cody dialogue makeover. Instead, we watch as Edward and Bella slowly find one another and awkwardly figure each other out.

Kristen Stewart and Robert Pattinson have a lot to do with power of this Edward and Bella story. Kristen Stewart’s performance is particularly inspiring. Somehow she manages to embody the complex feelings every girl had at 16 making her one of the most relatable female protagonists to date. Bella is strong but powerless, awkward but confident, insecure but comfortable and she’s strikingly pretty but completely unaware of her own beauty. At one of the most heartbreaking moments of the movie, when Bella must convince her father, Charlie (Billy Burke), that she hates Forks and is leaving, the look on Charlie’s face as she slammed the door was nothing to the sadness and regret that emanated from Bella as she drove away.

See also It's Official: 'Twilight' Costars Stewart and Pattinson Are Not (And Were Never) Involved

Robert Pattinson later evinced the same emotions as Edward races to Bella’s rescue during the climactic scene. As he’s hunched over her, he can’t help but say he’s sorry before trying to pick her up and whisk her away to safety. The split second where her pain is reflected in his eyes was both heart wrenching and touching at the same time. Pattinson’s performance surprised me overall. It would have been easy to play the cool and confident Edward who shows up in the scene where Edward and Bella arrive at school together and everyone’s watching. Teenage girls in the audience would have been swooning the whole time (not that they weren’t anyways). Instead, Pattinson never neglects Edwards inner-struggles. Each moment with Bella is a battle within himself and the agony mixed with adoration is ever-present in his extremely handsome face. In the end, he still is the Edward of our dreams.

Even though Twilight might not be the best movie ever made, it will always be perfect in my mind. I will be able to ignore the campy moments and abstinence preaching that other critics have been so fond of dwelling on. Instead, I will remember how I felt when Edward finally admits he can no longer stay away from Bella. I’ll remember that rush of joy as I watched the Cullen’s enter the cafeteria. I’ll remember that at its very core – this is my Twilight.