‘Twilight’ Review: Only For Those in the Cullen Cult

Twilight is the perfect movie for Twilight fans. The film adaptation of Stephenie Meyer’s best-selling novel sticks as close to the source material as possible, only making a few minor changes in the transition from page to screen. Entire scenes and chunks of dialogue are lifted straight from the book, which is bound to thrill anyone who’s been carrying a dog-eared copy of the novel in their backpacks for the past year. 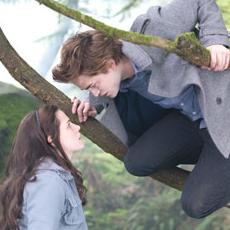 It’s no surprise that the rabid Twilighters will love the film, but what about the rest of the moviegoing public? Director Catherine Hardwicke does a fine job bringing the story to life, but unfortunately the story itself isn’t all that interesting. Anyone wandering into Twilight hoping to discover why the series has become such a pop culture phenomenon will leave feeling completely befuddled. The story is little more than a mash-up of elements that have been done better in numerous other tales.

For the uninitiated, Twilight tells the tale of a 17-year-old girl named Bella Swan (Kristen Stewart), who moves to the small town of Forks, Washington to live with her father after her mother heads off to Florida. It’s not long before Bella lays eyes upon the beautiful, mysterious Edward Cullen (Robert Pattinson), who’s the pale-faced James Dean of the school. Edward initially seems repulsed by Bella’s mere presence, but deep down he’s struggling to resist sinking his teeth into her. Bella soon figures out that Edward and the rest of the Cullen family are vampires, setting up the sort of star-crossed teen romance that we’ve all seen play out a billion times. Just as their relationship is getting serious, a not-so-friendly vampire named James (Cam Gigandet) comes to town, possessing no other desire than to hunt and kill Bella. Let the vampire showdown begin!

I wish there were more twists, turns and surprises to the Twilight story than those mentioned above, but this is a movie that’s impossible to spoil. It plays out exactly how you think it would, with very few sparks of originality to be found. It’s impossible to blame screenwriter Melissa Rosenberg for failing to add anything new to either the teen romance or vampire genres. She simply followed Meyer’s novel, which is seriously lacking in the plot department. It seems that Meyer’s one original idea was to have her bloodsuckers sparkle in the sunlight, which is something that plays much better on the page than the screen.

With the story itself feeling completely uninspired, it’s up to the romance at its center to make or break the movie. Thankfully, Stewart and Pattinson have chemistry to burn, and it’s easy to believe why they would be so enraptured with one another. The only thing that threatens to sink the love story is Pattinson’s performance as the “vegetarian” vampire, which is somewhat bizarre. The actor seems uncomfortable throughout the entire movie, and I couldn’t tell if that was a deliberate choice or simply bad acting. Either way it works, as Edward is supposed to be grappling with his dangerous feelings toward Bella for much of the film. Pattinson’s work isn’t the star-making performance some were hoping for, but it’s at least passable.

The real star of Twilight is Kristen Stewart, who imbues Bella with a deep soulfulness and relatability that helps ground the otherworldly proceedings. Having read the Twilight novel, I can honestly say that Meyer’s version of Bella is one of the most poorly written heroines in literary history. She comes across as a klutzy, pre-feminist creation who spends all her time swooning, crying, falling down and obsessing over Edward. She also seems incapable of fighting her own battles, instead waiting for her man to swoop in and save her. Thankfully, the strong female trio of Hardwicke, Rosenberg and Stewart combine forces to make Bella more tough and independent on screen. She’s not exactly a Buffy, but she does seem like a real, flesh and blood teenage girl.

Even without a huge budget to work with, Hardwicke successfully brings the Twilight world to the big screen. The look of the movie is appropriately washed out and gloomy, which is fitting for the small, rainy town of Forks. The director was also wise to add some action set-pieces to the film’s latter half, which is something the novel was lacking. Hardwicke handles the action scenes just as well as she handles the more intimate moments between Bella and Edward. She seems to be the right director for the material, but the material continuously lets her down.

Twilight is a better movie than the novel deserves, but like the first two Harry Potter films it sticks too close to the source material to ever become truly interesting. This isn’t something that’s going to stand on its own and win over new fans. It’ll play wonderfully to the Meyer fanatics, and maybe to those who’ve never seen superior human/vampire love stories like those in Buffy the Vampire Slayer and True Blood. For everyone else, it’s best to let the Twilight phenomenon pass on by. It’s not going to go away anytime soon, so we might as well get used to it.