It seems that Michael Scott and the rest of the employees of Dunder Mifflin Scranton branch have not only found relative success in the paper business but in the TV circuit as well.  NBC has sold its acclaimed flagship comedy, The Office, to local broadcast stations representing more than 93 percent of the U.S., including each of the top 50 markets.

The press release, which was announced by NBC president Barry Wallach, is in preparation of for The Office’s fall off-network launch.

“In the tradition of NBC’s legendary Thursday night comedies, The Office is set to debut in syndication next fall with a tremendous loyal 18-49 fan base that’s eager to watch their favorite series five days a week,” Wallach said in a statement. “Our broadcast and advertising partners alike are eagerly anticipating the arrival of The Office, which has continuously grown its highly desirable audience each season.”

The Office, which has earned prestigious television honors such as the 2006 Emmy Award for Outstanding Comedy Series, has now been sold to stations from many of the nation’s leading broadcast groups, including FOX, CBS, Tribune, Peachtree TV, Sinclair, Gannett, Meredith, Hearst-Argyle, LIN, and Local TV, just to name a few. This also means that FOX stations will carry The Office in the top markets of New York, Los Angeles, Chicago, Dallas, Houston, Washington, Phoenix, Minneapolis, Orlando, Baltimore and Memphis, Tennessee, while CBS-owned stations will air the mockumentary in Philadelphia, Boston, Seattle, Miami and Pittsburgh.

Currently in its fifth season, The Office delves into the lives of the workers at Dunder Mifflin paper supply company in Scranton, Pennsylvania, with Steve Carell, Rainn Wilson, John Krasinski and Jenna Fischer on the forefront.

See also  Which 'Office' Character Are You?

Meanwhile, reruns of The Office are already running on TBS as part of a previously arranged cable deal. 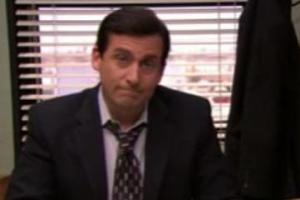 Will the TV Revival Trend Die or Grow Stronger in 2018?

Proof That Dunder Mifflin Had the Worst Office Christmas Parties Ever

‘The Office’ Season 8 Promos: Along Came A Spader…