The smartest character on The Office is the unseen cameraman. While the show doesn’t often reference the documentary film crew, Michael Scott’s final episode did as the ex-boss took off his mic before leaving forever. While the goodbyes were sweet, there was something even bigger going on in the background of the episode that some fans may have missed: The connection between Erin and Phyllis. 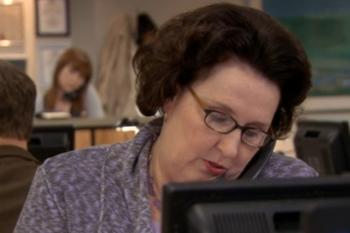 Early in the episode, Phyllis revealed that she gave away a baby in high school, and later Erin wished she knew who her birth mother was. That was immediately followed by a scene where the camera started on Erin, then zoomed out so Erin was in the background and Phyllis was in the foreground.

The shot may have seemed innocent if you weren’t watching carefully, but in reality, it was just another sign that the camera knows more than anyone it’s filming. The obvious suggestion was the cameraman has a hunch that Phyllis is Erin’s biological mother.

It’s not the first time the cameraman has discovered a secret that no one else knew. When Pam started to suspect that Dwight and Angela were hooking up, she relied on the cameraman to help get her evidence, and in the season 2 episode “E-Mail Surveillance,” the camera rushed to show Pam that Dwight was eating a Baby Ruth shortly after she saw Angela buying two of them.

The camera also exposed Jim and Pam’s relationship in “Fun Run” when they claimed they weren’t dating but were caught in a car together.

On The Office, the documentary film crew is perhaps the most important character, because it shows us what it sees, not what the characters see, and can help expose secrets and relationships. Now that they’ve figured out Phyllis and Erin’s connection, the only question is when the bombshell will come out. Will Erin and Phyllis discover this on their own, or will the camera crew step in to reunite the mother and daughter.

Or, in the unlikeliest of scenarios, the cameraman is wrong and, despite the evidence, Erin and Phyllis aren’t actually related. But if that’s the case, then The Office is very good at red herrings.

(Image and video courtesy of NBC)