You knew it was going to happen sometime: the status went back to quo last night on The Office. But, as far as ends getting tied off cleanly, “Broke” was an inspired episode, full of tension, suspense, and yes, humor. And Michael finally got to stick it to everyone, as a threatened Dunder-Mifflin had no better choice than to offer the Michael Scott Paper Company a buy-out. 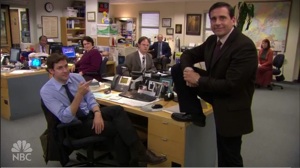 In a rare moment of seeing the big picture, AND using the correct metaphor to describe it (“Wouldn’t you rather have a fishing pole than a fish?”), Michael successfully negotiated the $60,000 buy-out into a multi-million dollar deal to get his old job back, plus a sales position for Pam, a job for the disgraced Ryan, and even Charles Miner tossed out of Scranton.

The final moment of the episode was deservedly triumphant, as Michael,foot to desk, silently flaunted his stuff, and Jim gave his signaturepoint-and-smirk, in a sort of salute to this day, when Michael Scottshowed everyone that this idiot savant is a bit less idiot, and a bit more savant.

It was especially great to see a rarely glorious conclusion for Michael, since “Broke” was directed by Steve Carell. Under his hand what could have been a frustratingly straightforward wrap-up of the MSPC storyline became an outstanding vehicle for real character-driven comedy, at the end of one of The Office‘s most successful arcs to date.

With three episodes left this season on The Office, most major elements are back in their rightful place, but we do have some important questions to tackle, such as:

How and when will Holly return?

How will Jim deal with Pam’s new role as a salesperson?

Will Ryan sit next to Kelly, and will their “romance” rekindle?

Will we see Charles Miner again? We’re led to assume that he’s not fired… just relocated.