The ‘New Girl’ Panel Opens Up at PaleyFest

The creator, producers and regular cast all gathered for the New Girl panel at PaleyFest in L.A. last night, resulting in some laughs, revealing moments and even Jake Johnson dancing on stage. 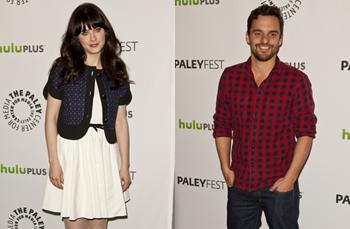 A Story about Modern Friendships

Creator and head writer Elizabeth Meriwether touched upon the heart of New Girl, which is essentially about a group of people who “need to grow up a little bit.” And a lot of that growth happens in the individual friendships formed amongst the group of four roommates and Jess’ best friend Cece. Specifically, the relationship between Cece and Schmidt has gone down a potentially romantic path recently when the two started sleeping together in secret (“there are so many reasons to hide this man,” said Hannah Simone, who plays Cece). Meriwether says she loves “getting to explore this modern relationship, which isn’t about will-they-won’t-they” (because they already have), but more about reaching that “emotional intimacy–trying to find out what’s underneath it all.”

Similarly, fans have known that Zooey Deschanel‘s Jess and Nick (Jake Johnson) are destined to get to that complicated place sooner or later–we’re hoping sooner. But the producers, while acknowledging the inevitable, seem to want to hold off on rushing into anything too soon. When Deschanel and Johnson were first put together, “[the producers] were all like ‘too much chemistry!'” claims Deschanel. In tonight’s new episode, Deschanel first tried having her arm around Johnson to comfort him in a tender moment, but the producers continued to insist it was too much, eventually leading to a perfunctory fist bump to his arm. But they hinted that it will eventually get there, as all the relationships among the characters continue to deepen.

But until that unavoidable future, Jess will have a different guy to tickle her fancy: guest star Dermot Mulroney (or “the big D,” they call him). Mulroney is set to play Jess’ student’s father who is “sophisticated and debonair” and will start a little “something-something” with Jess over the course of a few episodes. Deschanel says it’s fun to see how her male co-stars reacted to him, both on and off-screen; as characters, they’ve “never met, like, a man” (at which point Johnson defensively quips, “OK. That’s enough.”) and as actors, she reveals they were a little worried they were going to look like “clowns” in front of him. Johnson’s character Nick even goes as far as being “smitten” with Jess’ new love interest and he jokingly says, “I think Nick falls in love a little bit.”

Deschanel calls the show “more collaborative” than anything she’s done before and the other cast and producers agree. “They’re writing as we’re shooting, it’s all happening at the same time,” she says. Another producer adds, “we do our part by having the scripts ready, but then we let them play–let’s see how this thing organically forms.” Everyone agrees the set is “fun and playful” and the joy they have in shooting, they believe, comes through on the show. The producers emphasize the pivotal role the actors play, citing them as a major role of inspiration: “you have to come up with a shocking number of ideas… when we met these people, we really felt that we could tell a million stories about them.”

Though the panel did discuss the process and motivation behind the show, there were also many jokes and ridiculous moments throughout. The cast seemed to thoroughly enjoy teasing co-star Max Greenfield, who plays Schmidt (also someone who is the butt of many jokes), about his tiny nipples, which are frequently exposed on the show as Schmidt has a tendency to take his shirt off. But Greenfield played off all the mocking with a smile, simply saying “it’s a delight, getting as nude as I do on the show.” Greenfield in turn wasn’t shy about describing Johnson’s complete lack of dancing ability when the guys were shooting a music video of the show’s theme song for the website, saying he’d “never laughed so hard” and that he was in tears. This of course prompted Johnson to perform his moves on stage, which was actually endearing, seeing him so rhythmically handicapped.

Deschanel also contributed to the laughs by showing the audience her “tortoise face,” an impression she and her sister used to do of a turtle eating very slowly with its fat tongue out, so that all the imaginary food would slide down their faces. When an enamored teenage girl asked the cast what they would be if not actors, the answers were a writer’s assistant (Greenfield), a gambling degenerate (Johnson), a homeless thief (Lamorne Morris), Martha Stewart (Deschanel) and, as she had tried everything else, Simone said there was only acting left.

From the panel it seemed evident the cast and producers genuinely enjoy the successful first season New Girl has had and hopefully that rewarding process will continue for rest of the season, which continues tonight at 9pm on FOX.

‘New Girl’ Finale Recap: A Revealing Night in the Desert

‘New Girl’ Recap: ‘Tomatoes’ Are No Substitute for Happiness