‘Supernatural’ Creator Talks about Going Up Against ‘Lost’

It’s time for fans to gear up for the return of the demon slaying Winchester brothers, as Supernatural airs the first of four all new episodes beginning tomorrow night at 9pm.  In a recent interview with Kristin at E!Online, creator Eric Kripke revealed his feelings on the Bela and Ruby controversy, what it feels like to go up against Lost, and what chance the show has of returning for another season or two.  This week’s episode, entitled “Malleus Maleficarum,” will deal with classic Supernatural tropes like witches and hexes, while also offering up some back story on the mysterious Ruby (Katie Cassidy). 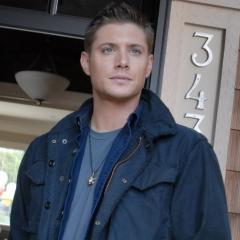 The first thing that fans want to know is whether or not Supernatural will be returning for a fourth season. “We always feel like we’re a bubble show,” Kripke explains.  “We always feel that the sword of Damocles is kind of dangling over our heads.  And that’s why we’re so fervent about getting the word out with fans.  The fate of the show lies in their hands more than anybody else’s.  You know, they have to continue to spread the word, they have to continue to let their friends know, because the main thing that determines whether we’re back is just viewers.  Pure and simple.”

Fans may have to do quite a bit of work now that Supernatural is going up against ABC’s sci-fi juggernaut Lost.  While Kripke isn’t thrilled about the idea, he says that he understands the reality of being in one of the most competitive time slots on television.

“Well, we kind of have a Murphy’s Law time slot,” he explains.  “Just as we are breathing a sigh of relief, like, Oh, finally, we get to air, out of the way of new episodes of Grey’s [Anatomy] and CSI and, like, thank God, we turn on the TV, and they say, “Lost premieres Jan. 31,” and we’re like, “Great!”  It’s the most lucrative time slot of the week, I get it.  But I think it’s up to the fans, and they have to get the word out.  And I’m kicking and stamping and screaming as loud as I can to get as much promo time as possible.”

Kripke also had something to say about Bela (Lauren Cohan) and Ruby, the two female characters that have caused a bit of controversy amongst Supernatural fans.  Some people like them, and others curse the day they arrived on the series.

“I’m not surprised the fans are responding this way,” he admitted, “because they tend to be very passionate about the show, and God love them for it.  And they tend to have very strong opinions, specifically on the females we bring on to the show.  And last year, we had this whole issue with the character Jo, so I knew this year we’d be up against that.  But I’d say the difference between last year and this year is that I like these characters.  Alona Tal (Jo) is a terrific actress, and I thought she did valiantly and beautifully with the part we gave her.  But even before the original episode aired, frankly, I was watching them and was like, ‘I don’t know if we conceived this character the right way.’  So, I wasn’t surprised by the reaction, and that’s why we pulled back on the character of Jo.”

While it may be tough for Supernatural to go up against Lost, I’m confident the ratings will hold up if fans get the word out that new episodes are airing.  After all, the Winchester boys have survived much deadlier threats than a few island castaways.