Super Bowl XLVIII Is the Most-Watched U.S. Broadcast Ever

Despite low early numbers, the final ratings for this year’s Super Bowl proved to be the most-watched telecast in U.S. history. An average of 111.5 million viewers tuned in to watch the Seattle Seahawks dominate the Denver Broncos 43-8.

The huge rating is a bit of a surprise given the fact that the game was a blowout from early on. Still, the 2014 Super Bowl is now the single most watched program in the history of U.S television. 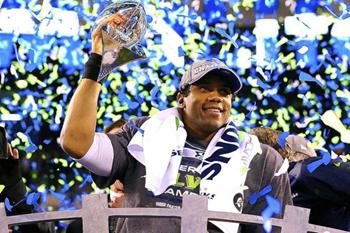 This year’s event narrowly edged out the Super Bowl from two years ago, which finished with 111.3 million viewers. And it’s up more than three million from last year.

Due to this Super Bowl’s ratings, it also means that the NFL championship game represents nine of the 10 most-watched TV broadcasts of all-time. The only other program on the list is the 1983 M*A*S*H* series finale with 106 million viewers. This year’s Super Bowl knocked the series finale of Cheers off the list.

The increased interest in football is apparent by the fact that the top five programs of all time are the five most recent Super Bowls. Here’s the complete list of the Top 10 U.S. broadcasts of all-time.

However, the biggest audience ever didn’t quite help New Girl and Brooklyn Nine-Nine, which aired after the Super Bowl, Perhaps due to the blowout nature of the game, the duo of FOX comedies only averaged 20.8 million viewers. That’s tied with last year’s Super Bowl lead-out program, Elementary, though timing also hurt that show. Due to last year’s memorable Super Bowl blackout, Elementary didn’t begin airing until 11:11pm ET. New Girl, however, started at 10:23pm, the second-earliest start for a post-Super Bowl episode in 10 years.

To be fair, the low average is due to combining the two shows. New Girl actually scored close to 26 million viewers, but Brooklyn Nine-Nine fell to under 15 million. The average for the two FOX comedies marks the second-lowest post-Super Bowl rating in the past 20 years. Only ABC’s 2003 broadcast of Alias (which started just after 11pm) was lower.