The Suite Life of Zack and Cody

Aside from playing London Tipton on The Suite Life of Zack and Cody, Brenda Song also serves as a host to yet another Disney series.  Pass the Plate, which premiered on October 22, is the 19-year-old actress’ new TV gig where she helps kids and their families learn more about healthy foods. 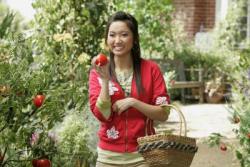 Rotating on-air each day, Pass the Plate is a multicultural series that is produced in association with Disney Channels in 10 countries and is presented in multiple languages with subtitles.  It aims to inspire kids and tweens to lead a healthier lifestyle by sharing cultural and historical facts about food and cooking, while giving emphasis to kids assisting in the preparation of their own meal.

“We want our programming to reflect and recognize that everyone shares a responsibility to encourage kids and families to adopt healthy lifestyles.  Our ongoing healthy kids initiatives…and especially Pass the Plate…represent our global team’s effort to both inform and empower our viewers, showing them how kids just like them around the world enjoy and benefit from healthy foods,” Disney Channels Worldwide President Rich Ross said in a statement.

Aside from the Suite Life actress, Pass the Plate also features young stars in Argentina, Australia, China, France, India, Italy, Japan, Mexico, South Africa, the United Kingdom and the United States, each telling a story about interesting ways to eat healthy foods in their culture and their families.

Pass the Plate will showcase nutritious recipes, which will also be available on Disney’s website, where kids and their families can look up information on how to adopt a healthier lifestyle.  The website will also exhibit how different cultures prepare nutritious meals, plus some interesting facts, pictures, videos and games.

Meanwhile, fans can catch Brenda Song as the dim-witted and spoiled rich teenager on The Suite Life of Zack and Cody weeknights at 7:30/6:30c on Disney.