So, Lost did not achieve the Outstanding Drama Series Nomination and you’re bummed out.  Maybe, it is because you have missed the point.   Critics and fans are aghast at Lost’s apparent ‘snub,’ but in reality, what happened was not necessarily a snub.  In fact, Lost’s meager nominations were in highly important categories and may have been an affirmation that the momentum fans felt going up to the Emmy announcements was, while a little misguided, very justified. 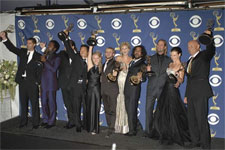 The fact is, fans and critics alike were trashing Lost when season three began.  Sure, there was an initial elation that the show was back, but that was quickly followed by the ‘Lost has lost it’ claims.  As the six episode mini-season went on with very little in the way of information, distressed fans echoed character Jack’s (Matthew Fox) sentiment in a latter episode, “Are you going to tell me what you want, or am I just here to watch cartoons all day?”  (Blatantly paraphrased, the purists will have to excuse me.)

If you were a Lost fan, it was a dark time.  Lost’s status as a brand would no doubt assure a fourth season, but support for the show was waning, ratings were dropping, and the critical appall was mounting.

Luckily, for everyone, Lost’s crew was more than up to the task and the embattled show was brought back to, and beyond, it’s original form.  The critics were pounded into submission by superior episode after superior episode, fans delighted at the new aspects that were beginning to come light.   The ratings stood fast as the acclaim grew right up until Lost aired its paradigm shifting finale.

What this illustrates, though, for those of us who were whining that Lost did not receive an Outstanding Series nom, is the very reasoning behind our complaint.   Season three was a season of renewal for Lost.  Had Lost not brought it’s a game, the series would not have gotten the guaranteed 48 episode extension, let alone the host of Directing, Writing, and acting nominations that it received.

So, Lost fans, relax.   The crew turned a sinking ship into a state of the art hovercraft, and those efforts were certainly celebrated in the nominations that Lost received.   To snag the Outstanding series nom, it just needs to maintain that level for an entire season.  Unfortunately, season three turned into a salvage operation that was successful beyond anyone’s wildest dreams, still had too much wreckage on its back to fit in the Outstanding Series envelope.