Chicago Magazine ran an article on a piece of Lost‘s past you may not be familiar with.  Then again, you should be familiar with it since this particular piece is featured in the opening credits of each and every episode of Lost.  The piece of Lost’s past is a show called Nowhere, and the man who wrote it is Jeffrey Lieber.  The story of how Nowhere ceased to exist, and Lost took its place is something most in the entertainment press talk about with professional sterility.  How Jeffrey Lieber’s rejected pilot for Nowhere allowed him to strong arm a piece of the Lost pie, along with top billing in the ‘Created By’ credit is something a lot of people would rather not discuss at all. 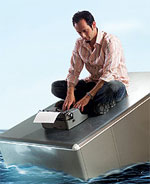 As the legend goes, Lloyd Braun, former president of ABC, while on an executive retreat, challenged his cohorts to come up with an idea for a show.  The group was looking for ‘the next big thing.’  Braun’s contribution was a series modeled after Castaway, starring Tom Hanks.  The concept was then shown to JJ Abrams, who brought in Damon Lindelof, and the production was fast tracked.

In reality, this is not what happened at all.  To hear it told, Braun’s yes men did everything they could to get the show into production, including bringing in Spelling productions to develop the pilot.   Jeff Lieber was brought in to create the initial pitch, an ensemble castaway drama drenched with realism, tied up in a narrative taken directly out of Lord of the Flies.

As the development dredged on, Lieber felt confident the project was a go right up to the day that he received word that Spelling was being ditched, him along with them.  The concept was simply not what ABC was looking for.  Essentially, they looked at Nowhere as pedestrian castaway fare, they needed something that could refresh itself conceptually and keep viewers tuning in for seasons to come.  This is where the JJ Abrams and Damon Lindelof portion of the story comes true.

Lieber was not satisfied though.  He filed a grievance with the Writer’s Guild claiming he deserved creator credit and an equal piece of the pie for his contribution.   The rumor is that ABC did not agree with this.  After all, he’d submitted what was essentially a rework of castaway stories dating back to Daniel Defoe’s Robinson Crusoe and beyond.  He’d openly attributed the overarching narrative to Lord of the Flies.  The only thing Lieber had not done was take these overused clichés and given them a self-sustaining device.

Regardless, the guild ruled in Lieber’s favor and demanded ABC credit Lieber as a ‘creator’ of  Lost, as well as pay him appropriate royalties for every episode aired.

Interestingly enough, while Lieber knows better than to behave ungraciously he still refers to his victory as “hollow.”  The reason for this might not be in Lieber’s beef over his ejection from the show.  Lieber claims “Had somebody said, ‘Lloyd thinks it’s too real—maybe we need a monster or an otherworldly element’—I would’ve said, ‘OK, no problem.’ But I just never got the chance.”  What he fails to understand, apparently, is that no one had to tell JJ Abrams or Damon Lindelof that. Lieber’s credit as creator of Lost, and the circumstances under which he earned it, are the sad punctuation to his own statement.  He kvetches that nobody gave him what JJ Abrams and Damon Lindelof didn’t need to be given, the ability to create an interesting, ground breaking idea that transcends the trappings of his own cliched setting.

See also Catch Up on 'Lost' in Less Than Nine Minutes

The ‘Lost’ Series Finale: What Did You Think?