Television actor Dennis Haysbert is convinced that his character on 24 paved the way for African-American presidential candidate Barack Obama.  Haysbert, who played President David Palmer on the hit show, believes his role painted a picture of just how America would be if a black man were in charge, and that viewers liked what they saw. 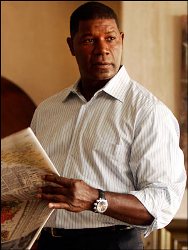 “As far as the public is concerned, it did open up their minds and their hearts a little bit to the notion that if the right man came along… that a black man could be president of the United States,” Haysbert, who believes that Obama is the “right man,” said in the January 21 issue of TV Guide.  “People on the street would ask me to run for office… when I went to promote [24].”

Dennis Haysbert presidential alter-ego on 24 bears similarities with Obama.  Both Palmer and Obama were senators and both campaigned in their mid-40s.

“I think we both have a similar approach to who and what we believe the president is,” Haysbert said in another interview with the Los Angeles Times.  “Barack doesn’t get angry.  He’s pretty level.  That’s how I portrayed President Palmer: as a man with control over his emotions and great intelligence.”

Haysbert strongly supports Obama, and even once chartered a helicopter after a shoot for CBS’ The Unit, which features him in his first starring role since 24, to attend a fundraiser for Obama’s campaign at Oprah Winfrey’s house near Santa Barbara, California.

“That was not cheap,” Dennis Haysbert said.  “You add the price of the ticket to get in, that’s a significant endorsement.”

That all said, it is important to note that Haysbert’s character on 24 is not the only black president that has not been seen onscreen, nor is he the first.  For one, Oscar winner Morgan Freeman played President Tom Beck on the doomsday film, Deep Impact.  Freeman, who is also an Obama supporter, said that white people have also wished he were really the president.