Great news for fans of Misha Collins. The Supernatural star revealed in an exclusive interview with BuddyTV that Castiel will not only play a big role in the final eight episodes of this season, but he is also in the final stages of signing on as a series regular for Supernatural season 5.

In our interview with Misha Collins, we also spoke about what’s in store for Castiel this season, his interactions with fans, whether he’ll finally get to wear something other than a suit and trenchcoat, getting into trouble with Jared Padalecki and Jensen Ackles, his grandmother’s reaction to his shocking and disturbing guest appearance on Nip/Tuck, and the possibility of more than just five seasons for Supernatural.

There are eight episodes left in season 4 of Supernatural, and Misha Collins will be in six of them playing a fairly substantive role. “The biggest thing for Castiel is going to be his struggle with his doubt about the orders he’s getting from Heaven,” Collins said.

However, that’s not all. Fans will also get a bit of an origin story for Castiel “We also will get to meet the human being that Castiel possessed,” he said, “and get to learn about that backstory, about who the man was.” Perhaps the most exciting part of this backstory is that it means Misha Collins will get to wear something other than the suit and trenchcoat he has donned all season.

“I had no idea I was going to be wearing this costume for so long,” Collins said. “I probably honestly would’ve given a little bit more thought to what I was wearing, maybe requested a slightly better fitting or nicer suit.” However, Collins didn’t talk about what his new outfit or the man being possessed by Castiel was up to.

Collins also revealed that although nothing is absolutely official, “I’ve been told that I am coming back as a series regular.” He added that for season 5, Collins would likely appear in 17 of the 22 episodes, so Castiel isn’t going anywhere anytime soon.

While it will be nice for Collins to finally get a series regular gig after spending more than a decade as a TV guest star, it could be short-lived since Supernatural Eric Kripke has said that there is a five-year plan for the series. Misha Collins, however, has some reasons to be skeptical. “I really don’t know what the inner workings are, but I don’t think that that’s necessarily the final word.”

Does this mean a Supernatural season 6 is still a possibility? Perhaps.

Off screen, Collins also entered hallowed ground this past weekend by attending his first ever Supernatural fan convention in Cherry Hill, New Jersey. “I actually enjoyed myself,” Collins said. “Other than having fairly severe hand cramps from having to sign my name so many times. I definitely learned that I need to make my signature as simple as possible.”

The Supernatural set is notorious for pranks, but according to Collins, Jared and Jensen have toned down the scale a bit, though they still get into trouble. “We went and shot at an abandoned warehouse last week, and Jared, Jensen and I did get scolded for breaking some windows.” In Collins’ defense, he did mention that the windows were asking for it.

Finally, Supernatural fans may have been a bit traumatized by a recent episode of the FX drama Nip/Tuck where Misha Collins guest starred as a yoga instructor who possessed the ability to gratify himself through bending. While Collins usually tells his grandmother about all his TV appearances, he left this one out, though he says she still found out about it.

Luckily for Collins, his grandmother confused FX with FOX News and missed the whole thing. “I narrowly escaped my grandmother’s eternal damnation,” he said.

However, if you’d like to be scandalized, you can watch Misha Collins’ episode of Nip/Tuck by clicking here.

Supernatural returns for the final eight episodes of season 4 this Thursday at 9pm on the CW. 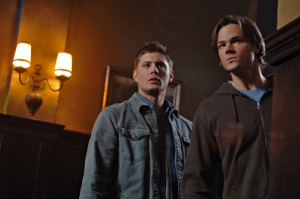