Exclusive Interview: Kris and Amanda, from ‘The Amazing Race 14’

The U-Turn is always a point of controversy on The Amazing Race.  Kris and Amanda were eliminated last night because they were U-Turned by Margie and Luke, and there has been much debate about what Margie and Luke did.  Was it ethical?  Kris and Amanda weren’t a threat to Margie and Luke on last night’s leg, but then again, Amanda and Kris were shaping up as a team to be reckoned with – I thought they were the most likely to win it all.  The U-Turn, despite its brutal ramifications, is a part of The Amazing Race, and should therefore be utilized, right?  It may have been cowardly, but I figure if you’re playing for a million dollars, you take every advantage available to you.  You only race once.

Amanda and Kris, on a show that consistently features dysfunctional and often appalling young couples, were a breath of fresh air.  The couple got along incredibly well in stressful circumstances, remaining likable even as the reality of their impending elimination became clear.  We had the chance to speak with Amanda and Kris earlier today about their time on The Amazing Race.

You can find the written transcript as well as the full mp3 audio of the interview below.

Hey this is Oscar Dahl from BuddyTV and I’m here with Amanda and Kris from The Amazing Race.  Amanda, Kris how are you two doing?

Last night, watching it from home or from wherever you two watched it – that couldn’t have been too much fun.  What was going through your heads during the episode?

K: Well, we were definitely prepared for it.  We had known for quite some time now, but there was definitely some anxiety going into it, like “What are they going to show?”  So, I think we were just a little bit nervous, but besides that, nothing too bad.

Did you guys know that it was Margie and Luke before you watched the episode last night?

See also  'The Amazing Race' Leg 3 Prediction: Which Team Will Go Home Next?

A: Actually, we didn’t know until we went to sequester where we found out.

K: Yeah, we knew up until now, but we didn’t find out until after we got eliminated.

When you found out what was your reaction?

K: We were just really shocked.  We kind of felt like it was a low blow.  We had gone to lunch in Romania the day before and the teams were split off into two different tables, and at the table that Margie and Luke were sitting at was with Kisha and Jennifer and a few of the other teams, and after lunch Margie approached Amanda and I and was like “Yeah, just to let you know, we were talking about if the U-Turn comes up who would use it and who wouldn’t,” and Margie said to us, “Yeah, we totally said that we never would do that and Kisha and Jennifer said that they definitely would.”

A: They were the only ones at the table that said they would and all the other teams were saying they would never use it.

K:  So, the next day they U-Turned us and right away we thought it was definitely Kisha and Jennifer.  We thought there was no way it was going to be them (Margie and Luke). We were just shocked and felt like it was a low blow.

To me, the U-Turn should only really be used if you are close to being eliminated and on someone who is close to you…

A: Exactly.  That’s exactly what we thought (laughs).  We always said that the only time we would ever use it is if it was the last U-Turn and we knew we wouldn’t have someone turn around and U-Turn us back and then, only if we needed it.  If we were neck and neck with another team in the back of the pack, then if it was necessary we would use it.  But, they were on the first flight…

K: No, they were on the second flight.

A: Oh, well, they were still in the very front of the pack, and it just was very clearly unnecessary to use it.  In my opinion, I thought it was stupid that they would waste it because they can’t use it again.  I just didn’t think it was very strategic.

Was there anything edited out last night or over the course of the season that you wish CBS had thrown in there?

K: Well, the first episode, we kind of felt that we didn’t get shown a whole lot.  Like, the cheese hill, when we got to that point, there was already a bunch of teams already there and we breezed through all those people.  It  didn’t show how strong we really were in that first episode.  I wish they would have shown more of that.

What was your guys’ favorite place you visited over the course of the race?

A: We definitely loved Switzerland.  It was gorgeous.  I mean, when we first got there and that train ride to the village of Lacarno –  that train ride, I think it was just over an hour or maybe even two – it was just so gorgeous. Lakes and waterfalls and all these cute villages, towns you’re going through.

K:  Driving down the Autobahn in Germany was pretty bad ass too.

See also  'Big Brother 18' Spoilers: Who Is the Week 10 HoH and Which Juror Returned?

K: We were already spending so much time together beforehand, every day we’re kind of together, so we weren’t really worried we’d get sick of each other because that’s just not the type of people we are. I’m not the kind of guy that has meltdowns and cries and that kind of stuff.  We went into it with the thought that we were going to try and keep our composure, have fun and enjoy the experience.

One last question: What do you guys have cooked up for the future?

A: I still have just less than a year left of school.  We came back, Kris is still trying to find a job in this economy since he just graduated.  He’s trying to look for work and I’m trying to finish school and until that happens, we’re kind of waiting to get engaged or anything like that until after I graduate.  We know we’re going to be together forever…it’s just a matter of time and waiting until the time’s right.

K: I’d like to get involved in working in television too, now.

All right, Amanda and Kris, thanks for stopping by.

A: Thank you so much. 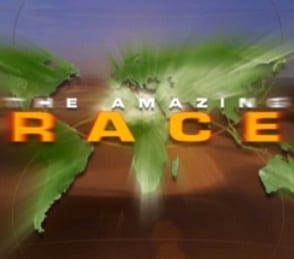 ‘The Amazing Race’ Recap: Teams Belly Dance for Their Chance at One Million Bucks

Are Scott and Brooke the Worst Winners in ‘Amazing Race’ History?

‘The Amazing Race’ Recap: The Teams Collude to Get Out a Target

Is the Constant Bickering Making ‘The Amazing Race’ a Drag or a Delight?