In another installment in our series of interviews with the best and brightest of TV’s writers and producers, we at BuddyTV recently sat down with new Head Writer of Gilmore Girls, David S. Rosenthal (“Spin City”, “Hope & Faith”). We were granted the pleasure of talking to Mr. Rosenthal about taking over an established show, the new direction the show’s stories are taking, and the future of Gilmore Girls. Gilmore Girls can be seen every Tuesday at 8PM ET/PT on The CW. 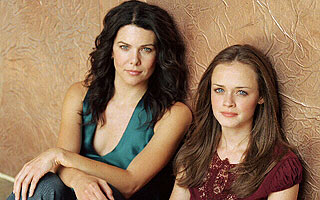 It’s your first season as the new Show Runner on Gilmore Girls, taking over for creator Amy Sherman-Palladino. How has the transition been?

Good. I mean, it’s been exciting. Amy created a wonderful show and she set the bar very high in terms of quality. So, you know, it’s a lot to live up to and the fans are obviously very committed and loyal so I felt certainly a great responsibility to maintain that enthusiasm and, you know, it’s been a really exciting season for me. I’ve really enjoyed the challenge.

Amy Palladino wrote most of the episodes, correct?

Yeah, she and her husband Dan wrote a good 80% of the episodes, sure.

How hard was it to learn to replicate Amy’s unique “voice” in your writing and how have you gone about replacing her output?

Fortunately, I spent last year on the show as an Executive Producer and got to spend a lot of time working with Amy and Dan and kind of getting a feel for the show and the way it was run and written so I really felt like I had a good year under my belt to kind of get the lay of the land, then I brought in a staff of writers. There are eight of us working on the show which is a larger staff than they had in previous years so there’s certainly more of a sharing of the workload in terms of the writing and all that stuff. So, it’s been good. Ultimately, you definitely have to develop your own style and your own way of managing things and your own way of running a show. You know, I certainly tried to stay true to a lot of the things that have gone on here in the last six years and the way the show’s been put together, and I certainly felt that continuity was an important part of my job as making people feel like its still the show they know and love and it’s still Gilmore Girls. Obviously, I’m a different writer than Amy so I’m going to bring different things to the table but, ultimately, I think the characters she created and the world she created is so strong that it can hold both our points of view.

Is it easier with the transition having actors that are already well-versed in the unique language of the show or is that kind of inconsequential for the writer?

No, that’s really helpful actually. They’re really talented, gifted actors and they know their characters so well and they’ve been doing this for so long that it’s really a huge benefit for us as writers. Also, creatively it’s a nice thing cause if there’s something that doesn’t feel right to them or doesn’t quite jive with how they feel about the character it’s an easy thing to communicate with them about. It’s actually really good since, obviously, they’ve been living these characters for seven years so they have a certain level of experience to draw on, which can be very helpful to us.

A typical Gilmore Girls script is roughly 15 pages longer than a usual one hour drama, correct?

Yeah, exactly right. We shoot like 77-78 page scripts, which is yes, substantially longer than the normal drama.

Does that ever cause problems in the editing room or have you timed it out pretty perfectly by now?

We’ve got the timing down pretty well. Typically on a show one page of script equals one minute, but on our show one page is significantly less than a minute. So, yeah, we just are able to pack more in an episode than most shows, at least in terms of dialogue and in terms of the number of scenes. And, you know, it’s a lot to ask of the crew because they have to shoot nine or ten pages a day, but they’ve been doing it for a long time and they’ve gotten used to it. It’s just a style and a tone that Amy established that has really worked well for the show, so it’s certainly something that I wanted to continue.

Before the show, did you and your new staff map out a game plan for the rest or the season, in terms of the story lines, or are you playing it by ear?

No, no. We sat down and we mapped out an arc for the season: a beginning, middle, and end for all the characters and the relationships. You really want to plan ahead and really want to know where you’re going so you can build the things and set things in motion early on that can pay off later. Obviously, as you go through the season things develop and story lines emerge or you respond strongly to certain things. They can certainly shift and change but we definitely spent the beginning of the season really mapping it out and really trying to get a handle on the whole arc of the season. Where we wanted to start, where we wanted to go, where we wanted to end up. That’s a very important part of what we do.

There’s been some rumblings about this being the Gilmore Girls final year and, with a couple of the actors contracts up, do you have to map out and have a backup plan for that and how does that work in mapping out a story?

Ultimately, if this is the last season, that’s something we can address towards the very end of the season. It’s one of those things like I feel like we’re in a place where the season we have planned, the ending of the season could serve as the ending for the show or serve as the new beginning for a new season and its one of those things where I think we’re planning to be in a position where it could feel like, “Ooh, this is the start of a new, interesting chapter in the Gilmore Girls lives,” or it can also feel like an ending. So, I think strategically we’ve kind of tried to envision an ending that could serve as an ending or a beginning of a new chapter and a new season.

Were you happy with the way the story ended last season or, if you were running the show, would you have done anything different?

I don’t know. I mean, Amy and Dan have been doing the show for six years and they’ve guided it so beautifully and so brilliantly, I’m certainly not going to question their choices and frankly, for me, I felt like it presented a real challenge for me coming into this year and an opportunity to take what we’ve been given and run with it and really see what we can do and explore that. Obviously, the situation presented itself so we get to explore some things. What does it mean? What are the consequences? Where does this take the characters? So I thought of this as a real opportunity and I was excited to get started and explore that.

Any time you break up two beloved characters like Lorelai and Luke, there’s going to be a fan backlash. But, personally, I think you’ve handled the situation quite well. How difficult was it to make it plausible and fan friendly?

Yeah, I mean the goal was really to approach it honestly and take it one episode at a time and see how their relationship develops and just try to be true to the characters and to be respectful of their history and respectful of their relationship and just try to treat it honestly and fairly and respectfully, and hopefully the fans will feel the same way. I mean, if we approach it that way then hopefully fans feel that.

Has there been any talk about a spin off?

I have no idea about that. My focus is really on doing 22 episodes of Gilmore Girls this season. That’s plenty on my plate.

Was there any change in the way the show was produced after moving to the CW?

No, not as far as I can see. The CW kind of inherited the show from the WB, so I think it’s been a very successful long running show for the WB so I don’t think there was any sense that there was a great need to tinker or tamper with it, but to hopefully support it and have it continue to be a successful show for them, which it has been. So, there really has been no change at that end.

Are you happy that spoilers are out there for Gilmore Girls?

You know, as a story teller, you’d rather just have people experience the story as you’re telling it. I mean, if you’re reading a book, you’d rather not have them flip to the end of the book and read the ending. Just for their own experience, you’d rather them…you’re telling a story, you’d rather them follow along with you as opposed to running up ahead. But, you know, I also appreciate that people are really interested and excited about the show and want to talk about it, so obviously that’s just a part of what we do. So, I mean I certainly don’t have a problem with it, but for me, I just know that the best way to experience a show like this is to just take it in week by week and enjoy it without knowing too much about what’s happening. It’s the same problem I have with movie trailers; they show you pivotal moments of the movie, and then when you get to those pivotal moments, you’re not surprised because you’ve already seen them two or three times in the theater.

Story-wise, do you try to think about what the fans would like to see happen?

Do you ever read fan forums online?

I do not. I know others do and they share tidbits with me, but I don’t read the stuff. I know that it’s a passionate fan base and I know things are discussed in great detail, which is cool and that’s great that people are so into the show and passionate about it. I think that’s really great.

And, finally, will Logan and Rory break up this season?

No comment. (Laughs) You’ll have to wait and watch.

Gilmore Girls: Emily Kuroda Returns to the Stage for ‘The Trojan Women’