Bones is quickly becoming one of FOX's hottest commodities, providing procedural episodes for the network to fill in the gaps left by canceled shows.  One of the big reasons for Bones' success is the charm of star Emily Deschanel, who plays socially awkward forensic anthropologist Temperance Brennan.  Paired with federal agent Seeley Booth (David Boreanaz), the two have an effortless chemistry that reminds viewers of the heyday of Mulder and Scully. 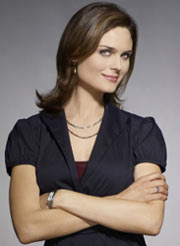 Emily Deschanel spoke to BuddyTV at last weekend's FOX press junket.  She spoke about how her chemistry with Boreanaz has evolved, working with her father who directed an episode of Bones, and dressing up like Wonder Woman for an upcoming episode.  Below you will find a transcript and mp3 audio file of the interview.


Hi, this is John from Buddy TV, and I'm here with Emily Deschanel, the star of Bones on FOX. Hi, Emily.

I'm good. One of the main reasons I think for the success of this show, is the fantastic chemistry you have with David Boreanaz. How did that come about, and how is that refined now going into the third season?

That's a good question. You know, I think David and I immediately had a kind of chemistry as actors together. We work hard, we work together every weekend, we work hard at keeping the chemistry there. I think what's great is the writers write all these different scenes, where we get to explore the characters in different ways, so it keeps it really fresh and interesting. We're not getting stuck in some kind of rut.

They put us in new situations where our characters have to address different situations together, and different experiences. So I think that's the key to it, to always try and move forward and do something different each time, and explore the relationship in different ways, have different things to discuss or argue about. I think that's what keeps it fresh, and we work hard at keeping the chemistry alive in there. It's not an accident either. At the same time, I think naturally we have our rapport with each other that is just there.

And the show mixes a lot of, it'll do comedy and it'll do drama as well. Do you prefer doing one or the other?

I love doing a show where I can go back and forth between drama and comedy. I think that having the comedy makes the drama better, and richer, and stronger. I think vice versa, having the drama makes the comedy funnier. I think when something's too one-sided or one-note, or it's only dramatic, it becomes kind of sappy or cheesy. And when it's funny all the time, it seems like it's trying too hard.

So it's great to have that balance. I love doing both, and I'm really happy to be doing a show where I get to do some comedic stuff, without it being a sitcom or something where it's all comedy. I love the challenge of having to switch tones. There's tonal changes throughout, within scenes a lot of times, even in… I love that challenge.

And how are you most different and most similar from your character?

I think I'm most similar with my character in the way that we can get wrapped up in our work, and kind of forget our personal lives. I can relate to my character in a lot of different ways. I've been in situations where I've put up walls in front of myself, like she has. I think she's more extreme than I am, but there's a lot of things that are not like my character. I hope I'm socially a little more at ease with people than she is.

She's becoming better at dealing with people and stuff. That hasn't been an issue for me as much. I'm not as smart as she is, I wish I was. I loved math and science in school, I never took it to a higher level, but those were my favorite subjects. So I have that in common with her. I was kind of a nerd, so that's like that's similar. But I'm trying to think of the ways that I'm different.

When you're playing a character, you look at the ways you're similar, and how you can relate to your character. So I'm not thinking of how I'm different. Hart Hanson, the creator of the show, will always say that I'm the least like my character than any of the other actors on the show. He says that, when he says that to people, people are always like, “Oh, so she's not that smart?” He says “No, that's not what I mean by it.” And I have to take his word for it. But I don't, I can relate to my characters on a lot of levels, but I'm not as extreme. I don't have a wall up like she does, but I can relate to that wall.

And we've been talking to a lot of the other cast members about, because they all seem very high on the Halloween episode, in which you dress up like Wonder Woman. Was that a fun experience for you, or more so for the men on the set?

It was a very exciting experience for me, because I loved Wonder Woman as a child. I was just going through boxes recently, I was moving, and I had my little, I had this box of memorabilia. I don't keep that many things from my childhood, but I had a couple of T-shirts and stuff, and I had this Wonder Woman towel which has faded completely away.

I was obsessed with Wonder Woman as a girl. I've always loved that character, she's strong. I think she was made by a psychologist to have a woman superhero. I just loved that concept, so I was really excited to play the character. That said, after about a day or two in the costume I was ready to take it off. It's a little uncomfortable to be in your underwear all day long basically, and it's like a corset. I was happy to go back into regular Brennan clothes.

And now your father has actually directed several episodes of the show?

One episode so far, and he's going to direct a second soon.

Is that weird, or different having your father direct as opposed to just someone else?

No. Yes, it's very different. You can't forget that he's not your father when he's there, and the first day was pretty nerve-wracking. I was just terrified that I would embarrass him or he would embarrass me, or do something wrong. After we got through that first day, it was really a great experience, actually.

I'll remember that forever, to have had that experience working with my father like that. We got to share things with each other, and he asked for my advice sometimes, which was pretty awesome. I took his advice when I did argue with him. It was a great experience, I'm looking forward to working with him in November.