Comic-Con 2009: The Apocalypse of ‘Supernatural’ Season 5

I cannot think of a better way to end this year’s Comic-Con than with a good Supernatural panel. This year’s panel was much different than the years before. The mood was different, it seemed… quieter. I blame it on the fact that Jared and Jensen could not be there. Creator Eric Kripke did say “The boys send their love” and when that didn’t cheer up the crowd he added “They are shirtless and send their love.” The fan-girls, however, were not left without eye candy as this time around Comic-Con vets Kripke and writers Sera Gamble and Ben Edlund brought along first-timers Misha Collins (Castiel) and Jim Beaver (Bobby). 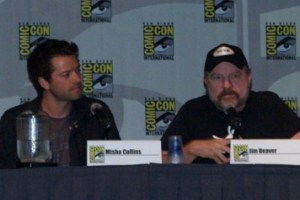 In last year’s Supernatural panel, Kripke showed the first five minutes of the season 4 premiere and I think every finger in the room was crossed that he would make that a trend. While we didn’t get the first 5 minutes, we did get a middle five minutes. Kripke explained this is because season 4 closed with a sort of cliffhanger and he didn’t want to give away the opening to season 5 right away.

I didn’t need more than the first 30 seconds of the clip to be convinced that season 5 is going to kick major demon butt. In those five minutes we learn that Castiel gets killed (blown to bits to be exact), prophet Chuck returns, Sam goes full on Dark Side (complete with black eyes!) but apparently was not aware of it, and Zachariah (played by Kurt Fuller) returns. As the clip ended I could have sworn I heard a collective “WTF?” from the entire room.

The panel was moderated by Chicago Tribune critic Maureen Ryan, and I want to give her my compliments as I think she did an exceptional job. So, the apocalypse is happening and that’s some really dark stuff, but writer Sera Gamble says that she believes this is the most optimistic season yet. “The last season was all about driving the brothers apart, and this season is all about them coming back together.”

Kripke says that yes, this is the apocalypse and it’s very serious but there are also funny moments. Ryan asked if they have dubbed it the “Party apocalypse” and Kripke jokes that because of the budget restraints they have been referring to it as “The Wal-Mart Apocalypse.”

OK, so the Winchesters are facing the apocalypse and their greatest weapon, Castiel, has just been blown to pieces. Fans want to know why, and will he be back? (Um, hello, it’s Supernatural!) As if reading my mind Edlund chimed in “Well, to be fair, both of our main characters have been killed more than once” and Kripke joked about having Collins on the panel as a seat-filler and claims the show hired a new angel to be played by James van der Beek.

Of course Castiel comes back, but Kripke warns us not to expect the same old Cas to come back. Collins elaborated that Castiel has changed – he’s lost some of his angel mojo and he struggles with the change, but ultimately must face it.

Kripke offered only cryptic clues into the direction Castiel is headed. He would only say that he has a very ambitious mission next season but would not elaborate. Collins offered that Castiel is in “full rebellion mode” because he has been completely cut off from heaven, and will have to find a way to become more human. I think this means we will be seeing a lot more of Collins in season 5.

Regarding the casting of Mark Pellegrino as Lucifer,  Kripke told the room that Pellegrino was nearly hired to play Castiel. It was between Collins and Pellegrino, and Collins barely beat him. I think it’s nearly poetic to then hire Pellegrino as Lucifer, but maybe I just have a warped sense of poetry. We will not be seeing Pellegrino in every episode because watching the bad guy lose every week would desensitize the formidability of Lucifer. We will be seeing Lucifer make his appearance in the season opener.

Kripke and the writers were excited to share some other great tidbits to look forward to in season 5. We find out that “Dean takes Cas to a whore house” (his words, not mine!) in episode 3. We should also prepare to see some familiar faces. It has been confirmed that Adrienne Palicki will be returning as Sam’s dead girlfriend Jessica in episode 3 but the panel was tight lipped about letting us know in what condition she will return. Kripke just said she comes back and when pressed to elaborate he added “and this time it’s personal?” Make of that what you will.

More familiar faces will be those of Ellen and Jo Harville. Meg Masters is set to return, but unfortunately the writers could not come up with a way for Meg to wear the same “meat suit” as Meg’s body was six feet under… decomposing. This means Nicki Aycox will not be reprising the role.

This season looks to be big — apocalyptic big; which brings up the question of a season 6. It is well known that Kripke has been standing firm on his five-season plan, but is this really it? Maybe not. Kripke did not say there were any plans whatsoever for a season 6, but he also said that it would be considered. “We have only gotten through six episodes so far, so we still have 16 episodes in this season,” explained Kripke “so I will cross that bridge when I come to it.” Kripke assured us that he refuses to drag on the apocalypse storyline or water down episodes just to find a way to pull out a season 6. He assures us that our questions will be answered and this chapter will come to an end. The panel wrapped with the traditional Gag Reel. It is always good to leave on a high note.

The panel was definitely not the same without Jared or Jensen, but I think I speak for everybody in the room when I say it was good to have Misha and Jim on the panel. If there is a season 6 then I look forward to next year’s Supernatural Comic-Con panel, but until then be sure to catch the season premiere of Supernatural season 5 on September 10 on the CW.