Battlestar Galactica: Episode 4.1 “He That Believeth in Me” Recap

Previously on Battlestar Galactica:  Lee watched as Starbuck’s ship exploded, only to be shocked when she reappeared months later claiming she had been to Earth.  Gaius Baltar was on trial for his myriad of crimes but was found not guilty after an impassioned speech from Lee.  Though he’s now an outcast in the fleet, he still has a few female followers who are willing to protect him.  Meanwhile, Tyrol, Tory, Anders, and Tigh rocked out to “All Along the Watchtower,” which led them to discover their true Cylon natures. 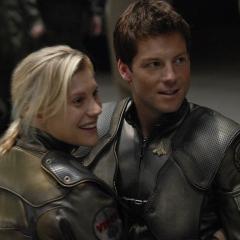 It’s been over a year since the last new episode of Battlestar Galactica.  Tonight, the wait is finally over.

The episode picks up right where the season 3 finale left off.  Lee (Jamie Bamber) is flying next to Kara and insists that he saw her ship explode, but she has no idea what he’s talking about.  Before he can worry about Kara’s true intentions, the Cylon raiders launch an attack.

The Galactica crew is convinced that the appearance of Starbuck is some kind of Cylon trick.  While they deal with the crisis on hand, Colonel Tigh pulls out a gun and shoots Adama right in the head.  Don’t worry, it’s only a dream sequence!  It looks like Tigh isn’t adjusting well to the whole Cylon thing.

Anders also isn’t adjusting particularly well.  He needs to jump in his Viper and go fight the Cylons, but he’s worried some sort of switch will flip in his head and he’ll go crazy.  Boomer (Grace Park) witnesses Chief Tyrol trying to calm him down, and Anders is relieved to discover that she has no idea they’re robots in disguise.

While in the Viper, Anders comes face to face with a Cylon raider.  He tries to shoot at it, but nothing happens.  As the action turns to slo-mo, the raider scans him with its visor.  A tiny red flash appears in his pupil, and all of the Cylon ships suddenly take off in the other direction.  The crew of the Galactica is baffled as to why they’d retreat, but it’s possible Tigh has an idea.

As we saw at the end of last season, Baltar (James Callis) is being whisked away by a trio of sexy ladies. They take him to a room that’s full of women, candles, and a  fairly tacky-looking Baltar shrine.  There are even a few men there as well, and it looks like they all think Gaius is the second coming.

Starbuck (Katee Sackhoff) arrives back on the Galactica and acts like she just got back from a short little vacation.  Lee and Anders hug her, the crew looks on in shock, and Adama demands she go to sickbay. Kara says that she was only gone for about six hours, but Sam lets her know that she’s actually been away from the ship for over two months.  Nobody has any idea what’s going on, including myself.

Gaius isn’t thrilled to be surrounded by his own cult, but they explain to him that nobody else wants him around.  Luckily, he still has Number Six to keep him company.  He also has a woman named Tracey, who is willing to offer up her body to keep him entertained.  He tries to follow Six’s orders and give her a speech about how there’s only one true God, but of course, he gets easily distracted by the promise of sex.

Doc Coddle gives Kara the magical Cylon test and ensures everyone that she’s not a toaster.  Roslin (Mary McDonnell) wants to know what happened to her.  Starbuck explains that she flew into a nebula, found Earth, took pictures of it, turned around, and then. . .she has no idea what happened.  She doesn’t know how she got back.

Tyrol (Aaron Douglas) inspects Starbuck’s ship and figures out that it’s a brand new model.  It’s not the same ship she left in, and it has no evidence of where she’s been.  The gang is back to assuming she’s a Cylon, thinking that maybe the test came back negative because she’d been a toaster all along.  This leads to a very awkward moment where Roslin and Adama discuss deadly Cylons while Tigh, Tory, and Tyrol whistle and twiddle their thumbs.

Back in Baltar’s lair, one of the women comes to him with her sick son, Derrick.  His virus can’t be cured, and though Baltar promises to pray, the mother assumes that the one true God doesn’t want her son to live. Meanwhile, the four Galactica Cylons discuss what happened to Anders while he was on his mission.  Tigh (Michael Hogan) thinks he just made a mistake and left his gun safeties on, but Anders is worried it was some sort of programming.  Tigh insists that none of them will end up like Boomer.

Roslin goes to see Six in the brig, hoping to find some information about the final five Cylons.  Six tells her that the five are close.  She can feel them nearby.  On the bridge, Starbuck is trying to explain that she can’t find Earth on a map, but has to follow her intuition to get back there.  As the Galactica continues to jump further away, she feels her knowledge of the location fading.  Roslin insists that they’re going to follow the Eye of Jupiter and not listen to Kara’s intuition, and Adama backs her up.

In a quiet moment together, Adama (Edward James Olmos) tells Lee that he should re-join the flight crew. However, Lee feels that it’s time to move on.  He’s considering taking a government job that will allow him to do some good in a different area.  He also brings up Zak and asks his dad if they would feel any different about him if he had been the one to come back from the dead.  Would they love him just as much if they discovered he was a Cylon?

Baltar prays over the sick boy, begging God to take his life instead of Derrick’s.  After his display of self-sacrifice, one of his cult members takes Baltar into the bathroom for the best scene of the evening:  he finally gets a shave!  I was never a fan of that massive prison beard.  A man walks into the bathroom and says hello to “President” Baltar, mentioning that his son is dead because Baltar’s police shot him on New Caprica.  Another man bursts into the room and holds the woman captive while the first man puts a razor to Baltar’s throat.

Number Six appears and reminds Baltar that he asked God to take his life instead of the boy’s.  Gaius begs the man to kill him, but before he can do that, the woman saves the day.  She beats the men down while babbling about how she was filled with God’s love.  Also filled with God’s love, apparently, is Derrick.  He’s somehow recovered from his deadly virus, which the women assume is a miracle brought on by Baltar the messiah.

Kara is looking at the wall filled with pictures of lost soldiers.  Her picture is still up there.  Sam shows up, and she admits that maybe she was abducted by the Cylons, cloned, and brainwashed.  Sam tells her that he would still love her even if she woke up one day and discovered she was a toaster, but Starbuck doesn’t share the sentiment.  If she found out Sam was a Cylon, she’d put a bullet between his eyes.  Ooh, awkward!

The Galactica does another jump, and Starbuck is frustrated that they’re still going the wrong way due to Roslin’s orders.  She decides it’s time to do something about it.  She knocks out Anders and the nearby guard, grabs a gun, and marches into Roslin’s quarters as she sleeps.  Roslin wakes up to find Kara standing over her with a pistol.  She’s going to take them to Earth, and not even the president is going to stop her.

The season 4 premiere of Battlestar Galactica ends with a “To Be Continued.”  Next Friday can’t get here quickly enough.