FOX’s Bones is entering cable territory next week, with TNT acquiring exclusive rights to the hit drama series.  According to Variety, neither the network nor distributor Twentieth TV would comment on license fees, but word is each episode costs around $400,000 to $450,000. 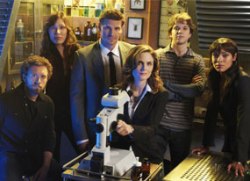 The deal allows TNT to gain access to the multiply weekly airings of Bones in 2009’s Fall TV season.  However, beginning on Tuesday, January 28, at 10pm, the network will also air the show as a weekly series, part of a clause that stipulates a repurposing of the episodes, starting with the show’s 2005 premiere episode.

TNT and TBS’ senior VP of programming Ken Schwab said that Bones fits the former channel’s strategy of scheduling original scripted police shows like the Kyra Sedgwick-led The Closer and the Holly Hunter-led Saving Grace, and repeats of procedural dramas such as Cold Case, Without a Trace and Law & Order.  Schwab’s counterpart at Twentieth TV is Bob Cook, the prexy-chief operating officer.

The new deal means that fans of Bones will be able to catch repeats of the show on both cable and broadcast television starting next week.  FOX is currently airing reruns of the series as part of its efforts to weather the ongoing writers’ strike.  The last new episode of the show aired in December, and the network announced recently that the remaining three pre-strike episodes, as well as the installment they pulled out last year, will air during May sweeps.