The OC struggled to satisfy its audience during last year’s mostly lamentable season 3 and comes back looking for redemption in season 4. The death of Marisa Cooper in season 3’s finale marked the end of an era for The OC. Mischa Barton and her black hole of a screen presence is gone, as are the rigors of high school. FOX has only ordered sixteen episodes of The OC for this season, which may be a clear indication that it will be the The OC’s swan song. Adam Brody and Rachel Bilson have film careers to attend to and may not want to sign up for additional seasons. 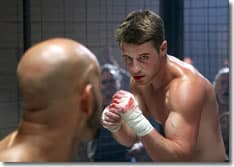 However, given the quality of this season’s first episode, they may want to reconsider.

The fourth season premiere takes place five months after Marisa Cooper’s death. Ryan Atwood works and lives in a seedy bar. Seth Cohen, college deferred until January, lives at home and works at a comic book store. Summer Roberts has turned into a hippie at college, protesting the caging of chickens, playing the didgeridoo, and dropping sarcasm from her repertoire. Julie Cooper alternates between gardening and sedating herself. Taylor Townsend has come back early (and secretly) from France, putting on the face of a contented ex-pat to all her friends. Back in the roles that suit them best, Sandy and Kirsten Cohen are the pillars of the show, the emotional rocks.

The premiere focuses on how the characters are coping with Marisa Cooper’s death. Ryan is, predictably, taking it the worst, submitting himself to regular beatings in a Fight Club-esque underground boxing ring. He does this to, presumably, numb the pain. In a plot we’ve seen before on The OC, the Cohen men spend the episode trying to get Ryan to come home to the pool house in Newport Beach.

I won’t spoil the rest of the episode, but I’ll say this: this episode is the best OC episode since the show’s first season. The absence of Mischa Barton is the best thing that’s happened to The OC in a long time. The cast is now exceptional from top to bottom and the show is, at least in the first episode, much darker in tone than the first three seasons. This is a good sign.

The forecast for the remainder of the season is gloomy, at best, for the characters. The important story lines (that I can forsee) are as follows: Ryan vs. Inner Demons, Ryan vs. His Need to Seek Revenge for Marisa’s Death, Seth vs. Summer and her Changed Personality, Summer vs. Her Identity, and Taylor vs. Loneliness, Again. There are sure to be more, but these seem to be the main themes.

What is great about this is that there is now conflict in almost every relationship on the show. What made season 1 so good was the feeling of alienation for everyone involved, especially Ryan and Seth. When those two became fully integrated, secure with who they were, in the second and third seasons, the show grew stagnant. As much as we might like to believe otherwise, we don’t want to see these characters happy and in good relationships. That doesn’t make for good drama.

Season 4 has been set up with a new found alienation and separation for all characters. The first year after high school already has this feeling built in, so that helps, but the main characters have now experienced something (Marisa’s death) that will forever skew the ways they interact with each other. The possibilities are endless.

Season 4, though it may be The OC’s final year, could end up being its best.

The Controversy Between ‘The O.C.’ and ‘Gossip Girl’