The New ‘America’s Next Top Model’ Voting System Makes No Sense, but has Hilarious Side Effects

As you may have heard, in honor of Tyra’s shiny new Harvard diploma, cycle 19 of America’s Next Top Model is going to college. And it’s also going democratic. To an extent. Allegedly. 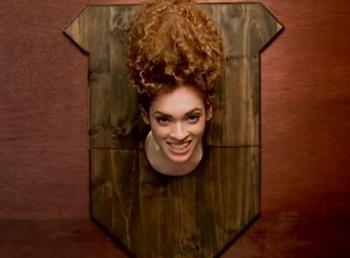 But I don’t think they taught a Polling Systems course at that two-week rich-people sleepaway camp that Tyra’s been calling her Harvard “business school” experience because the new online voting system for cycle 19 seems to make absolutely no sense, and it’s hard to see how the “votes” can have any impact on the way the show plays out — unless Tyra and her producers entirely change, and potentially ruin, the way their show plays out.

And seeing that the show is in its 19th cycle and that the CW has already moved Top Model to Fridays in the fall — the network’s version of putting a show in hospice — it seems a bit late to completely upend the entire system. (Then again, Tyra already got rid of the heart and soul of ANTM, so why not break its legs and reverse its spine as well?)

Here’s how the new voting system, which went operational today, claims to work:

“Cycle 19 will offer an interactive experience where, for the first time in America’s Next Top Model history, YOU will have a say in who stays and who goes in the competition. Beginning on May 24, fans can join the ANTM team to help decide who will be America’s Next Top Model. Fans will have two opportunities each week to vote online and rate each model’s photos during filming this summer. Then, tune in this fall to see how your favorites perform.”

So, if I’m reading this correctly, we, the “fans,” now have the responsibility burden opportunity to react in real-time to the Top Model photoshoots as they’re playing out, on a schedule of two photoshoots per week until the end of filming.

Apparently, no further information was deemed necessary — like which days per week we should vote, and for how long each voting window is open, or how much our votes are worth versus the judges’ votes — since EVERYONE KNOWS how this whole “vote about a show that you haven’t seen yet, for people you’ve never heard of, in contests you have absolutely no context for” thing works. It’s just so clear and obvious.

Actually, now that I’ve taken half a brain fart to think it over, it makes absolutely no sense. For these reasons:

I’m supposed to vote for the photos of my “favorites”? But I don’t HAVE favorites yet. I don’t know who these people are! We all know — and the show’s recent “branding” angle has only reinforced this — that ANTM is as much a personality contest as it is a modeling one. Yes, I could go online and just vote for the photos I objectively like the best. But without any context for what the goal of the photoshoot was, or who any of these girls are, that’s a crapshoot at best. It’d be like if American Idol asked you to vote by listening to ten-second audio clips of the contestants before the season started. You can’t judge a person and their overall performance on that little bit of information alone. And how am I supposed to help the models I like as people if I don’t know who I like yet?

On Tuesday, America’s Next Top Model Facebook page shared this gallery of 30 “potential” contestants for the college cycle. Today, they debuted Round One of photoshoot voting — thereby revealing the thirteen contestants from that pack of thirty who made the cut.  Maybe the producers didn’t care enough to hide the surprise there, but is the same thing going to happen in every subsequent photoshoot? I mean, there are only two ways to go about this (that I can think of), and they both suck: Either the producers force all thirteen girls to participate in every single photoshoot until the end of the cycle, or they expose who got eliminated after the previous shoot when they reveal the next round of photos, with one face missing from the pack.

How do I know my votes are going anywhere?

When they released the gallery of 30 girls, the ANTM Facebook page asked fans to “Like” their favorites, “sound off” in the comments, and “share” the photo of the girl they think will win, with the halfhearted promise that their input “might be featured” during judging. That gives the impression that our shares, Likes, and comments on this gallery actually matter. But they probably didn’t — and definitely don’t now. The contestants had clearly been decided before that gallery even went up. I mean, here they are today, posing as severed heads on hunting trophies for no discernible reason, and that nightmare probably took at least a day’s worth of orchestrating. So, if I can see that the votes have no purpose other than to help the network reach its social media goals, I have no reason to vote.

But if our votes DO matter somehow, there’s still no upside here. Because if I can’t see who is eliminated week to week, I have no reason to vote.  What if I’m just sitting there voting over and over for a girl who’s already been eliminated? That would be pointless. And what if she’s still in the game, but actually sucks as a person? (See above.) That would be terrible!

This zaps any real anticipation or suspense out of the whole thing.

As I just mentioned: If we can see the end product of every photo shoot before the show even premieres, what is the point of watching? Yes, there will clearly still be the standard mix of drama, antics, and asinine competitions with flimsy prize packages, but if you’ve seen a few cycles’ worth of those, you’ve seen them all. And if you’ve seen that much Top Model, you know that each episode’s photoshoot and the resulting final shots are (usually) the best part of the entire episode. They’re the entire POINT of the episode. And now the show is systematically giving all of that away, free of charge, before the show, like the proverbial she-cow that will never get bought (find a husband) if it keeps giving its slutty milk away for free. Do you want to buy that cow? And by “buy that cow,” I mean “stay home on a Friday night to watch that cow/give that cow a season pass on your DVR”? I don’t.

OK, so pretty much any way you slice it, this voting system is terrible. But I sort of lied when I said there was no upside here. There is. And it’s incredible. Get ready.

Perhaps in an attempt to combat that first complaint I mentioned about how we don’t know who these girls are, THE SHOW IS MAKING THEM FILM “PLEA VIDEOS” to get our votes. While on the photoshoots. So, in this first case, they made the girls beg for our approval while posing as dead animal heads. (And you thought The Hunger Games was grotesque!) Also, in these videos, they appear to think that we A) know who they are, B) know which college they go to and C) care. It’s hilarious!

So while there are many reasons to preemptively hate the new Top Model voting system, these might just be reason enough to love it.

Begging for pointless internet votes on an ancient reality show while posing as dead animals on a hunting lodge wall? Oh, you modern college gals. Your schools and parents will be so proud!

‘America’s Next Top Model’ Recap: Which Contestants Make It to the Finals?

‘America’s Next Top Model’ Recap: Jeana Gets Pushy at the Photo Shoot

‘America’s Next Top Model’ Recap: An Injury Occurs On Set and Another Woman Quits