‘The Flash’: 6 Tense Moments Leading up to That Killer Twist from ‘Abra Kadabra’

In the 18th episode of season 3 of The Flash, Barry is given the choice to make a deal with Abra Kadabra, a villain from the 64th century, in order to learn the identity of Savitar. That decision is complicated by Gypsy, who arrives on Earth-1 intent on taking Kadabra back to Earth-19. Meanwhile, there is still tension between Julian and Caitlin thanks to Caitlin’s deception, and a member of the team is gravely injured in the fight with Kadabra. Take a look back at the most memorable moments from episode 18, “Abra Kadabra.”

The Flash Spoilers: Season 4 Won’t Have Another Speedster Villain, Barry Will Travel to the Future and More >>>

Gypsy Returns with a Mission 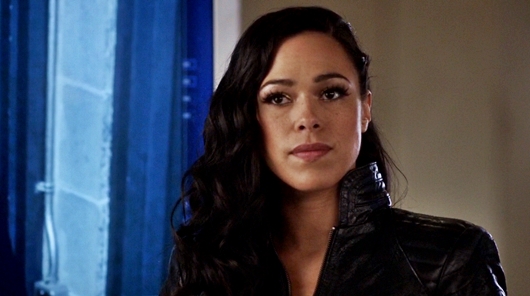 As the episode begins, a villain with magician-like powers, Abra Kadabra, makes off with a piece of tech from Stagg Industries, killing two guards in the process. When Barry attempts to capture the villain, he tells Barry that he is from the future and he claims that he knows everything there is to know about both Barry and Savitar. Just then, Gypsy arrives to take Abra Kadabra back to Earth-19 to face justice for his crimes. (In this case, justice means execution because Kadabra killed quite a few people on Earth-19 so it’s clear why he would want to avoid going back there.) Alas, before either Barry or Gypsy can take him into custody, Abra Kadabra vanishes.

Later, Gypsy gives the team the low-down on the villain — he is from the 64th century and his powers are the result of futuristic nano-technology. She also makes it clear that she is determined to take him down. 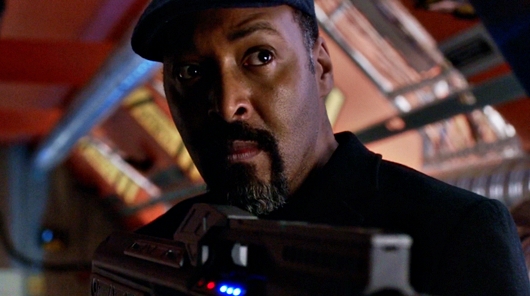 After Cisco vibes Barry’s vision of the future and says that everything is the same, Barry reminds the team that they only have two months left to change the future and save Iris from Savitar’s fatal blow. To that end, Barry tells Iris and Joe that Abra Kadabra has information on Savitar, and they realize that they have to get to him before Gypsy does. When Barry finally takes Kadabra into custody, the villain tells Barry that he knows Savitar’s real identity. Barry locks the villain up in the pipeline until he has a chance to question him. Kadabra then tells Barry and company that he will only reveal Savitar’s identity if they release him instead of handing him over to Gypsy.

Later that day, Barry tells Iris that he is considering letting the villain go, but Iris says they can’t do that even to save her life. Though Barry seems to be having a change of heart on that front, Joe is desperate enough to save Iris that he agrees to Kadabra’s deal. Kadabra gets Joe to open the door to his cell, but Gypsy arrives before Kadabra can follow through on his end of the agreement. He then attacks the team before escaping with a piece of tech from the time vault. 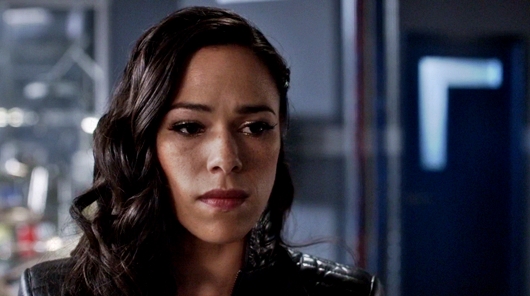 From the moment she arrives, Gypsy is adamant on capturing Kadabra and making him pay for his crimes, so much so that she can’t even focus on her usual flirtation with Cisco. When Joe releases Kadabra from the pipeline, Gypsy is furious, but Joe doesn’t regret trying to save Iris’ life. After her fight with Joe, Gypsy tells Cisco that Kadabra killed her partner/boyfriend several years ago and she’s been searching for the villain ever since. Despite Gypsy’s new-found mistrust of the team due to their willingness to free a murderer, Barry is able to convince her that they need to work together in order to stop Kadabra.

Quiz: Which The Flash Character Are You?>>>

Gypsy Takes Kadabra Back to Earth-19 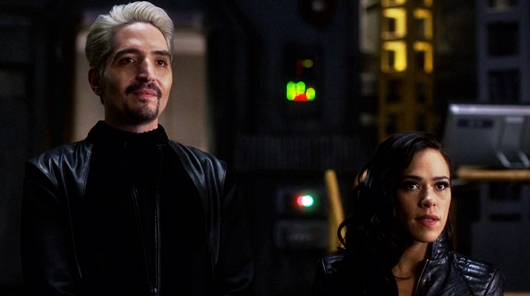 Gypsy manages to figure out that the reason Kadabra has been stealing tech from different Earths is because he’s trying to build a time machine to get back to his own time. In order to return to the future, Kadabra has to open a temporal wormhole, and when he does, the team is able track him. With Gypsy’s help, Team Flash is able to bring Kadabra down and Gypsy takes him into custody.

Kadabra once again offers to give up Savitar’s identity in exchange for his freedom, but Barry refuses to make a deal with him. Barry does try to appeal to the villain’s remaining humanity and practically begs him to give them something they can use to save Iris’ life. Alas, since Barry and Kadabra are enemies in the future, Kadabra relishes the opportunity to deny Barry the chance to save the woman he loves and to play a role in Barry’s greatest heartbreak. Thanks to all the tension throughout the episode, it is unclear where Cisco and Gypsy stand when Gypsy leaves for Earth-19 with her prisoner, but I suspect they’ll work things out eventually.

Barry Has a Plan to Save Iris 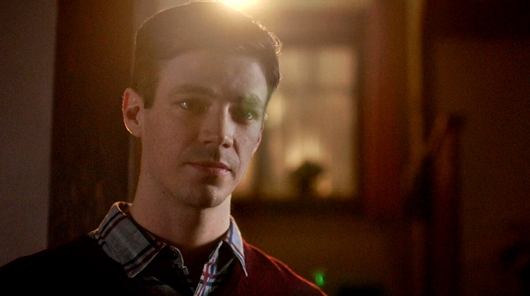 As the episode comes to an end, Joe opens up to Iris about his fear of losing her and how it’s been making him feel helpless. Joe would do anything to save his daughter’s life, but in this case, he doesn’t know if there’s anything he can do to stop the future from happening. (Jesse L. Martin is excellent throughout this episode and it makes me wish they had used him more in this arc. It is, after all, his daughter who is supposed to die, so it would’ve made sense to focus more on how Joe is dealing with Iris’ possible demise.)

After hearing their conversation, Barry tells Iris and Joe that he knows how to save her. Barry says that so many of the villains they’ve faced have been a step ahead of them because they’ve been from the future so they knew what was going to happen. Barry then reveals that he intends to travel to the future to get the answers they need. 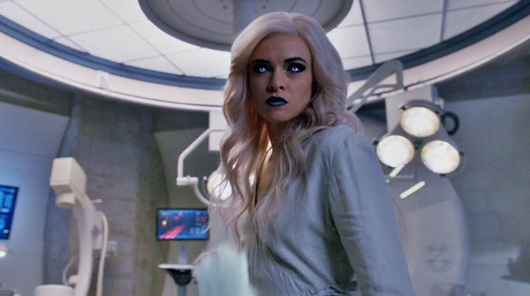 Early in the episode, Julian is still being standoffish with Caitlin thanks to her lie about stealing the piece of the stone. When Julian sustains a minor injury during Kadabra’s initial attack, Caitlin patches him up and it gives them a chance to talk. Caitlin apologizes for hurting him and tells him that she understands if he can’t trust her anymore. She does, however, ask for his forgiveness.

Later on, Caitlin is badly injured when Kadabra sets off an explosion to facilitate his escape. The team realizes that they cannot take her to a hospital because she’ll be identified as a metahuman and she’s still wanted for her attack on the CCPD. Since there are several pieces of shrapnel embedded in Caitlin’s abdomen, they need to do surgery in order to remove them. Unfortunately, Caitlin is the only one who knows how to do said surgery, but she tells Julian that she can guide him through it. Iris acts as Julian’s assistant as Caitlin talks him through the procedure and they succeed in removing all the shrapnel from her body. Once Caitlin recovers, Julian makes it clear that things are good between them again, and they share a sweet — albeit very brief, due to Julian’s clumsiness — kiss.

Unfortunately, in the final moments of the episode, Caitlin begins seizing and her heart stops. The only way to save her life is to remove the power-dampening necklace and let her cold powers heal her. While this move saves Caitlin’s life, it also turns her into Killer Frost. (Earlier in the episode, Caitlin specifically told them not to do this because she’d rather die than risk becoming her dangerous alter ego. Does this mean that Caitlin is the one who suffered a fate worse than death, as in Savitar’s prophecy?) Caitlin has worried about becoming Killer Frost since she learned of her powers so now that it has actually happened, how will she deal with it? Assuming she overcomes her alter ego eventually, will she be able to forgive Julian for going against her wishes?

What was your favorite moment from this episode of The Flash? Were you surprised that it was Joe, and not Barry, who took Kadabra’s deal? What do you think of Barry’s plan to travel to the future? Things have never worked out when Barry’s traveled into the past, but perhaps going to the future will yield better results. Are you excited about Caitlin’s transformation into Killer Frost? Are you disappointed that the show will not return until April 25th? Let us know your thoughts in the comments section.

How “The Flash” TV Show Fits Into DC’s Universe

‘The Flash’: Which Character Screwed up the Most in ‘Therefore She Is’?

‘The Flash’ Recap: Does the Team Figure Out DeVoe’s Plan?

‘The Flash’: Which Character Screwed up the Most in ‘Fury Rogue’?

‘The Flash’ Recap: Does the Team Safely Transport Fallout?