Take a look back at the wild adventure from Supernatural season 4 as Dean came back from the dead, Sam turned to the dark side, and the brothers raced to stop Lilith from opening the 66 Seals to free Lucifer.  This episode guide features every episode with links to recap, photos, videos and op-eds.

Sam and Dean aren’t speaking but the Apocalypse is now.

Dean and Bobby lock Sam in the panic room. How will he react when they let him out?

Castiel vacates his host, leaving ‘Jimmy’ in his place.

Do Sam and Dean have another brother, Adam?

Supernatural Season 4, Episode 18: “The Monster at the End of this Book”

Sam and Dean discover a series of books about themselves and learn more about Lilith’s plan for Sam.

Sam and Dean work in an office together but seemingly don’t recognize each other.  Yet they are compelled to team up to investigate some possible ghost activity.

Supernatural Season 4, Episode 16: “On the Head of a Pin”

When someone begins killing angels with Lucifer’s sword, Castiel and Uriel capture Alastair and ask Dean to torture him for information.

Sam and Dean head into the spirit world in order to solve the mystery of a small town where nobody is dying. They discover that Alastair is behind the plot.

A sexy siren forces men to do her bidding, and things get ugly when she turns Sam and Dean against each other.

While investigating their old high school, Dean and Sam flash back to their rather unique childhood.

The Winchesters investigate a trio of old magicians whose tricks start to resemble real magic.

Sam and Dean investigate a house occupied by a female ghost, but when a new family moves in things take a turn for the worse.

As Sam and Dean try to find a way to protect Anna while avoiding both Angels and Demons, Dean reveals to Sam his experience in Hell. Sam suggests to Dean that they step back and allow the 2 sides to have their ways Anna, the fallen angel got her groove back and went away with Alaystar who tortued Dean in hell.

Supernatural Season 4, Episode 9: “I Know What You Did Last Summer”

While investigating a case about a girl who can hear the conversations of the angels, Sam explains what happened to him while Dean was in Hell.  In flashbacks, Ruby teaches an angry, grieving Sam how to use his powers, and the two also strike up a sexual relationship.

Sam and Dean head to a town that has a wishing well that actually grants wishes.  Unfortunately, the wishes get twisted and turn bad shortly after they’re granted, leaving the town in chaos.  Dean finally opens up to his brother and admits that he remembers everything that happened to him in Hell.

In a special Halloween-themed episode, Sam and Dean look for a witch who’s trying to raise the demon Samhain.  After Sam meets Castiel and vengeful angel Uriel, he wonders whether he should use his powers to stop Samhain from wreaking havoc.

Dean contracts Ghost Sickness from a dead body, which makes him so frightened and jittery that he’s soon in danger of dying of a heart attack.  It’s up to Sam and Bobby to stop the vengeful ghost before Dean ends up back in Hell.

In this special black-and-white episode, Sam and Dean face off with a shape-shifter who likes to take on the form of classic movie monsters.  While investigating murders committed by Dracula, a mummy and a werewolf, Dean bonds with a local bartender named Jamie.

Sam and Dean try to help a man who is in danger of transforming into a flesh-eating monster known as a Rugaru.  Dean confronts his brother over his secret meetings with Ruby.

Supernatural Season 4, Episode 3: “In the Beginning”

Castiel takes Dean back in time to 1973, where he runs into his parents when they were teenagers.  Dean learns that his mother came from a family of hunters, and also figures out her strange connection to the Yellow-Eyed Demon.

Supernatural Season 4, Episode 2: “Are You There God? It’s Me, Dean Winchester”

Ghosts of people Sam, Dean and Bobby couldn’t save return to haunt them.  Castiel reveals to Dean that Lilith is attempting to break 66 seals, and if she succeeds Lucifer will walk the earth.

Read More:
Supernatural: Episode 4.2 “Are You There God? It’s Me, Dean Winchester” Recap
Supernatural: Lucifer is Busting Out All Over

Dean returns from the dead and discovers he’s being followed by a mysterious force. After reuniting with Sam and Bobby, Dean tries to figure out how and why he was resurrected. 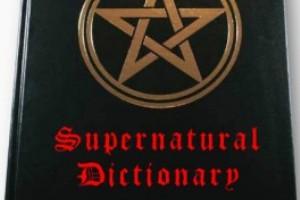 Mythica Movies In Order (How to Watch the Film Series)

If you're a fan of fantasy movies, then you've probably heard of the ...

Fifty Shades Movies In Order (How to Watch the Film Trilogy)

If you're eager to watch the Fifty Shades movies but need help figuring out...

The Mummy Movies in Order (How to Watch the Film Trilogy)

International audiences fell in love with the handsome "Rick O'Connell and ...

Fear Street Movies In Order (How To Watch)

Netflix's release of the newest Fear Street trilogy has got everyone ...

Tomb Raider Movies In Order [How to Watch]

The famous Tomb Raider Games have inspired a series of successful films ...

Mythica Movies In Order (How to Watch the Film Series

Fifty Shades Movies In Order (How to Watch the Film Trilogy

The Mummy Movies in Order (How to Watch the Film Trilogy

Fear Street Movies In Order (How To Watch

Tomb Raider Movies In Order [How to Watch