My friends told me the final six minutes or so of the Super Bowl were fantastic.  I'm one of those people who fast forwards through the game and watches the commercials, so all I can say is that I was thoroughly disappointed.  The only saving grace was the FedEx pigeon ad.  Well, that and the incredibly racist SalesGenie.com ads. 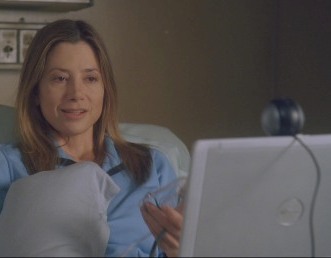 For my money, after the Super Bowl is even better, with a special episode of House.  FOX first aired the Super Bowl in 1997, after which it aired an episode of The X-Files.  Tonight marks the first time since then FOX is using it's post-Super Bowl slot for a drama, previously filling it with The Simpsons, Family Guy, American Dad and Malcolm in the Middle.  Last year, CBS made the horrendous decision to air a terrible episode of Criminal Minds, and thankfully House regains my faith in the post-Super Bowl episode with a funny, dark, outrageous and shocking episode.

An impressive aerial shot takes us through the vast wasteland of the South Pole.  A technician gets some windmills running when one falls down and the blade speeds towards his leg.  Blood gushes everywhere.  A psychiatrist named Milton comes out to help, and apparently in extreme cold, super glue can be used to cure femoral tears.  In a classic House bait-and-switch, the technician is fine, but the(played by Mira Sorvino) starts convulsing.

At Princeton-Plainsboro Teaching Hospital, Dr. Gregory House (Hugh Laurie) is angry that the budget committee has blocked free cable in the patients' rooms.  Administrator Lisa Cuddy (Lisa Edelstein) ignores his pleas and gives him the case, which grabs his interest when he learns the patient is trapped in the South Pole.

Still on a crusade for cable, House urges Cameron (Jennifer Morrison) to help as she's on the budget committee.  She urges him to stick with broadcast TV, and he replies that's only good for Tuesdays.  You have to love a good meta joke.

Later a high definition webcam is set up between House and Milton.  It has great reception for a signal from the South Pole.  House orders the team to deal with Cameron while he flirts with Milton.  After some playful banter, he notices her lung is collapsing and orders her to shove a needle into her chest to reinflate it.

Foreman (Omar Epps) suspects cancer, which they always do largely as an excuse to give Dr. Wilson (Robert Sean Leonard) something to do.  House banters with Wilson and suspects his "friend" is seeing a new woman because of his lavender shirt.  They ask her to take x-rays of her entire body, which she does, though because it's cold, she doesn't remove her socks.

That night, back at his apartment, House chats on his computer with Milton, who he asks to do a self-examination for cancer.  It involves taking her clothes off, and she is unwilling to do it without some reciprocity, so she gets House to give her a virtual tour of his apartment.  She's a pretty good shrink, using this as an opportunity to have an ad-hoc session with House about his self-loathing and anti-social tendencies.

Finally it's time for her to strip and begin her exam.  House has lit candles n his apartment, he's drinking bourbon, playing Marvin Gaye's "Let's Get It On" and making jokes about wanting to see her breasts.  Oddly, it could be the most romantic thing we've ever seen him do on this show.  After a while, House stops the music because he notices a hardened node hat could be cancerous.

Foreman and Wilson discuss the fact that House is growing an affinity for the patient.  The next day, when Milton does her own biopsy, Wilson is even more suspicious when House uses her first name and asks if she's OK.  House turns the tables to talk about Wilson's new lady, whoever she may be.  Later Wilson coaches Milton through her biopsy test and they have some nice dialogue about why the seemingly nice Wilson would be friends with House, and he lets it slip that House likes her.  His diagnosis is that it's not cancer, but she keels over in more pain.  "I'm screwed," she says.

In the ER, House's team is upfront about their mission to annoy Cameron until she gives into House's cable demands.  Cameron's response is to resign from the budget committee, so House orders his team to annoy her even further until she un-resigns.  Cuddy fakes firing Cameron, and House goes to yell at his new team for screwing up.  The lesson they were supposed to learn was not to go along with House's games, because they'll always lose.  But he still wants them to pay for his cable,

Without cancer, House turns to an auto-immune disease.  They run a weird paper clip test that is negative, and Foreman suggests she go outside to help her, but House is reticent to send a sick woman into -70 degree weather.  She agrees to go, but collapses before she can get there.  The injured technician comes through, but not before Milton falls into a coma.  House asks him to taste her urine as a diagnostic test.  When he doesn't put up a fight, House suspects it's because the technician is in love with her, which helps him.  In the end, the guy does it.  Most shows in the post-Super Bowl episode titillate fans by using scantily clad women.  House has guys drinking pee.

The coma was caused by increased intercranial pressure, so House has the technician drill a hole into Milton's head, which wakes her up.  Afterwards, House and his team do another differential diagnosis, and Kutner stands up to House suggesting a fat embolism.  He dismisses it, but Kutner is adamant.  House says it could only work if she has a broken bone, but he's seen x-rays of her entire body.  Or has he?

Because she didn't remove her socks, House didn't see her broken toe.  Yes, the big cause of her disease is a stubbed big toe.  The technician pops it back into place and all is fine.

That night, House tracks down Wilson waiting for his date.  Finally she arrives, and it's...CUTTHROAT BITCH!  One of House's candidates from earlier this season, she was the last one cut, and though her name is Amber, she was ruthless and so got that nickname.  Great to have her back!