If you could bring back one Heroes character to life, which would it be?  Death is something inevitable in any series but resurrection is something that seems to be a frequent practice on the show.  Over three seasons, Heroes has killed off many characters, including characters with potentially good storylines.  In my book, some of them deserve even more airtime than some of the present characters these days, including Maya Herrera (Dania Ramirez).  I’m not really a fan of the whole “bring back the dead” concept.  It ruins the impact and suspense whenever the series kills off a character, knowing that he or she will eventually walk again.  But if that’s the only way for my favorite character Elle Bishop to resurface the canvas, then I’m all for it. 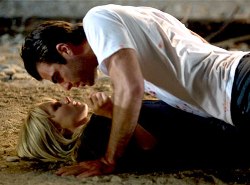 The second and third season of Heroes did not live up to most of my expectations compared to the first season but watching Elle stir up the plot made it all seem bearable.  It’s not just because she’s played by Kristen Bell, whom I absolutely adore ever since her days as Veronica Mars, but the character itself had a good back story (she was the subject of extensive testing condoned by her father to research her abilities when she was young) and a promising future storyline if the writers of the series hadn’t killed her off – unless she was never really dead in the first place.

Going back to Elle’s unexpected “death” at the hands of Sylar (Zachary Quinto), we saw Sylar covered in blood while pouring lighter fluid on Elle’s body before setting her ablaze with the lightning ability he inherited from her.  The question is: Why would Sylar kill Elle if he already has her power?

Of course, most Elle fans have thoroughly pondered on the possibility that Elle never really died in the first place.  Or maybe she did but her death wasn’t a permanent one.  E! Online‘s Kristin Dos Santos hints that maybe Elle isn’t really done for good since “there’s a cover-up at work and she may well rise from the dead.”  On the other hand, Entertainment Weekly‘s Michael Ausiello seems to be pretty sure that Elle’s departure is a permanent one.

I really don’t know who’s more credible here but I’m hoping that the writers would come up with a way to bring back Elle without employing its usual methods (and that includes injecting Claire’s blood).  After all, Elle’s presence on the show added a bracing perspective to Sylar’s story, knowing that two damaged souls can find love with each other.