From the very beginning, Meredith Grey has been an unconventional heroine. Neither black nor white but always...wait for it...many shades of grey, she (along with the show that bears her name) has always been, even in her lighter moments, dark and twisty. Imagine my surprise, then, when the season finale of Grey's Anatomy, "You're My Home", proved to be so bright and shiny. This is an episode that nearly could have served as a series finale, though we know that is not the case. Indeed, a few characters notwithstanding, most of our beloved surgeons are in a shockingly good place as season eleven draws to a close.

Remember Keith and Joan from last week? Both were in a terrible car accident cause when a tunnel collapsed. Joan gave birth to their son but was in danger of being permanently paralyzed due to a neck injury. Keith was trapped in a car so damaged that getting him out seemed impossible, until April Kepner got "ballsy" and had the whole vehicle towed to the hospital. So, as the episode opened, while a full team of doctors tried to extract Keith from the car without killing him, another team of doctors tried to save Joan as she developed a postnatal hemorrhage. Long story short, it looks like they'll both be fine. Let me say that again. This is Grey's Anatomy and yet two horrifically injured people are going to be fine. Clearly, it's Bizarro World at Grey Sloan Memorial Hospital and that's got me completely befuddled. This kind of thing just doesn't happen. Something is very, very weird. 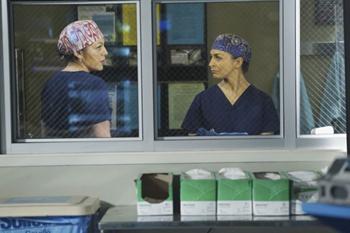 The Season of Meredith

Before this season even began, GA creator and showrunner, Shonda Rhimes, dubbed it The Season of Meredith. And how. I was very impressed tonight as Meredith, who can be very selfish but - in fairness - has suffered great personal loss in the death of Derek, stepped up to the plate on behalf of others. She talked sense into Richard and Catherine who were having yet another go 'round and reminded them that, no matter their differences, they love each other and they should cherish the chance to build a life together. Her point was well taken. They got married in this episode. She mended fences with Amelia, who got to hear Derek's last voice mail message. She even comforted Maggie, who found out that her parents were getting divorced. In short, Meredith Grey acted like a daughter and a sister. When one considers how this character has grown over eleven seasons, it really is amazing. Kudos to Ellen Pompeo for her fine work. She's actually done the impossible because I actually care what happens to Meredith Grey in season twelve. I know. I can't believe it either!

Jolex is on the ascent.

Despite misunderstandings (and Meredith's crazy plan to add not only herself and her kids but also Amelia to the frat house that is Casa Karev) Jo and Alex reached an understanding. Jo proposed that Alex sell Meredith's house back to her and that Jo and Alex buy a loft together so they would have a place of their own. Declarations of love were exchanged. It's a 'go'.

Japril is circling the drain.

Since returning from her tour as a medic in the Middle East, April Kepner is a changed woman. She is (like her mentor, Owen Hunt) a badass trauma surgeon. And she wants to go back to the sandpit. Jackson encourages her to go. He's glad for her to find a purpose in life again - a sense of purpose that's been missing since their infant son died. But Jackson also says he won't be waiting for her if she goes. Is it over between Jackson and April?

Omelia is neither here nor there.

Despite Amelia's vow to not date co-workers, she and Owen continue to be drawn to one another. And when Amelia can't bring herself to play Derek's voice mail message, Owen is the one who helps her through it. Still, at the wedding reception (held at the Dream House, naturally) they are not together. So I'd say they're in a holding pattern, neither 'off' nor 'on', heading into next year.

There will be interns.

It seems we'll be stuck with the new interns, who weren't completely useless this episode, just mostly useless. And why does Edwards get interns but Wilson does not? Not that I'm advocating for yet more interns, but it's an odd choice. Just sayin'.

Despite Richard's initial promises, Miranda will have to compete with an outside candidate of Catherine's choosing for the Chief of Surgery position. Will Miranda finally get the brass ring? Or is this an opportunity to bring a new character to the show?

Lots of questions. Not too many answers. Time to dance it out and fade to black...for now.

Miranda: I like this Kepner. I never thought I would like Kepner. Old Kepner was pigtails and bunny rabbits and smiling. Lots of smiling. But Kepner the reboot, Kepner 2.0...she's crazy! She's fierce. She's womaned up. Thank you United States Army.

Amelia: You mistook an intern for an attending?

Arizona: Yeah. He was pretty much running the trauma.

Miranda: Who's the Chief? I'm the Chief! (perhaps speaking too soon)

Meredith (about Amelia): I hurt her feeling and she's mad at me. I forgot I'm supposed to be her sister.

Owen: Do you miss it? Being in the field?

April: It's the only thing I ever think about.

Meredith (to Richard and Catherine): What is the matter with you two? My husband is dead. Yeah. I'm gonna play that card.

Meredith (to Maggie): Whatever it is, chances are, I've seen worse. And I am qualified to tell you how you'll survive. You should always come to me.

Derek (in his last voice mail to Meredith): I love you. I love our family. I'll see you when I get home. 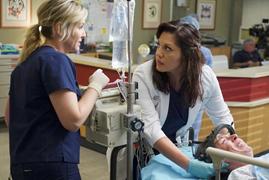 Discover the best of Grey's Anatomy on BuddyTV

BuddyTV is your source for Grey's Anatomy news, recaps, gossip, and more. See Everything You Need To Know About Grey's Anatomy for a complete guide to the show.