As popular and groundbreaking as Family Guy has been, it comes as no surprise that it has helped inspire another animated series, Phineas and Ferb.  According to Dan Povenmire, co-creator of the show which airs on the Disney Channel, Phineas and Ferb is somewhat of a hybrid between Family Guy and another well-loved cartoon, SpongeBob SquarePants. 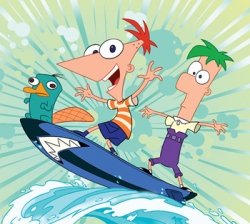 “We always like to say Phineas and Ferb is about the midway point between Family Guy and SpongeBob,” Povenmire remarked.

For the uninitiated, Phineas and Ferb is about two step-brothers who enjoy coming up with innovative things to engage in each day of their summer vacation.  Phineas in particular, a kid with a triangular-shaped head, has the unique knack for transforming his backyard into a ski resort, a surfing beach, a monster truck rally site and more.

Aside from Phineas and Ferb, the series also tells the story of Perry, the kids’ pet platypus.  Unbeknownst to the family, Perry is actually much more than a strange-looking creature.  He is, in fact, a secret government agent who goes by the codename, P.  And his mission?  To whip out his trusty trench coat and hat and save the planet from the evil designs of mad scientist, Dr. Doofenschmirtz.

According to Povenmire, Phineas and Ferb makes use of much of the same primetime understatement that’s been a staple on Seth McFarlane’s Family Guy, while also employing enough of what he calls the cartoony stuff.  For one thing, there is Phineas’ geometrically shaped head, and of course, the uncanny platypus.

“The platypus is sorely underused in animation,” Jeff “Swampy” Marsh, Povenmire’s co-creator, quipped.  Apart from that, Marsh didn’t really offer up any further explanation for their choice of a semi-aquatic, egg-laying mammal indigenous to Australia, to play the part normally reserved for the family dog.