Seth MacFarlane is now mega rich.  The two-time Emmy-winning comedian, who is best known for creating Family Guy and American Dad, has just signed an overall deal with 20th Century Fox TV which would keep him with the network through 2012.  According to The Hollywood Reporter, the new deal could be worth more than $100 million, making MacFarlane the highest paid writer-producer in the TV business. 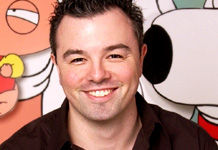 J.J. Abrams’ $60 million 5-year deal with Paramount Pictures and Warner Bros. TV, inked in 2006, was considered to be the previous industry peak.

The deal also keeps MacFarlane on board as producer of live-action comedies and as a voice actor for shows like Family Guy, American Dad and the Family Guy spin-off Cleveland, which is expected to be picked up for the next season.

MacFarlane’s previous deal with FOX has actually expired over a year ago and although negotiations have been active and ongoing, things haven’t always been smooth between the comedian and his studio.  He has endured a rocky relationship with the network, seeing Family Guy canceled and then resurrected after DVD sales went through the roof.  He has also been at odds with his bosses during the writers’ strike, during which he was very vocal on behalf of the scribes.

In order for MacFarlane’s deal to reach the $100-plus million figure speculated in the trades, Family Guy is expected to run for the duration of the agreement and other shows would likely have to move into a successful level of syndication as well.

A Brief History on The Family Guy